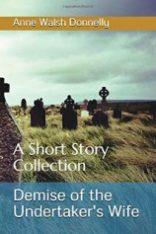 Demise of the Undertaker’s Wife

Demise of the Undertaker’s Wife is a short collection of short fiction, at just 86 pages. All but one of the twelve stories are set in Ireland, and are populated, as many good stories are, by the lonely and by those on the periphery. The characters share an inability to communicate about their losses, their secrets, their desires. Two of the protagonists hear voices, one of the angel Gabriel and the other of the malicious Iscariot.

There is no shortage of grief in these stories: husbands for dead wives; an old farmer for his male lover; a woman for the child she bore by her father, a child whom she was forced to call her brother and bury, unbaptised, in the garden. Indeed, the undertaker’s wife is grieving for her lover, whom the undertaker has just laid out.

Many of the characters experience lives half-lived. In “Our Mothers Lied. That’s the Truth”, Sr. Elizabeth finds love with another nun, who is now dead. Elizabeth finds that she has choices, if only she can break free of the hold of the convent. She writes a letter, with the ‘last three sentences. “Our Mothers lied. That’s the truth. The vow of chastity does not always bring happiness and joy”.’ She has the chance of a teaching job, away from the convent, or else of being denied the teaching role she loves, and becoming a full-time carer for an elderly nun. But the hold of the church is too strong; she denies her desires and stays.

Amongst these sad lives, there is sometimes a dark humour. I laughed out loud at the fate of the undertaker’s wife, in the title story. The undertaker snaps at his wife’s confession of infidelity, and she ends up in the coffin with Jack, her dead lover. Jack had asked to be buried with his two dogs, so the undertaker prepared a large coffin with room for all three. The dogs, however, will be buried under the rose bushes in the garden instead. ‘It’s funny, but I can never recall what happened next. All I remember was thinking how they were a perfect fit, herself and Jack Costello.’

There are touching moments in Donnelly’s characterisations, and this is especially strong in “Goodbye, Mr Fox”. Luke remembers his lover, Walter, with the smell of peat smoke, and there is unexpected sensory detail in a tender memory of lying next to Walter in bed: ‘a hint of manure still lingered on the back of Walter’s goose-skinned neck.’

Donnelly’s characters are generally older, but there is one standout story, “Half-a-boy”, which offers the first-person narration of a teenager with learning difficulties, described as ‘half-a-boy’ by the parish priest. The rendering of Mattie’s voice is faultless, as he makes his way to visit his brother Joe, who has protected him all his life. Following an accident, Joe is in St. Bridget’s, some kind of hospital or asylum, where people go in, but never come out again. Mattie overhears his mother and the priest discussing whether Mattie, too, would be as well off in St. Bridget’s. In spite of his limitations, Mattie is smart enough to see what his future might hold. The ending is heartbreaking, as Mattie hangs from a branch over the quarry lake: ‘Close me eyes, Whatever happens; it’ll be God’s will, as Fr. Constantine says […] I’m wet and there’s an eel with Joe’s face and he wraps himself around one of me legs but I don’t kick or wave or even breathe. And I’m not half-a-boy anymore. I’m an eel just like Joe and we swim round our oily lake.’

There are some stories where I felt that the writer could stretch her legs more. All are of a similar length, and I would like to read some longer stories from Donnelly. In “Permission Granted”, for example, there is too fast a move from conflict to resolution at the end. In other stories, the twists in the tale are not as satisfying as when the writer achieves a more literary kind of ending. I wonder whether, if left longer before revising, Donnelly would have edited these stories differently.

It is unfortunate that the quality of the book mars the reading experience. The book is not typeset well. It appears to be a Word document dropped into a template provided by the print on demand service (Amazon Fulfillment). The book’s cover is also curling at the edges. If The Blue Nib wishes to do justice to the writers they publish, they would be well-advised to engage a typesetter and designer.  [Editor’s note: It should be pointed out that the reviewer was sent an advance copy of the book which may not have been up to final production standard.]

Anne Walsh Donnelly is a relatively late starter to writing. She has a wealth of stories to tell, and I foresee a cracking full collection of stories in years to come.

As You Like It, RSC, Barbican. Review by Julia Pascal. London Grip Poetry Review – Tom Sastry