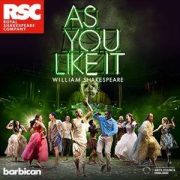 As You Like It is one of Shakespeare’s most crazy comedies and one of his most tedious plots.

The first act is all exposition set in the corruption of the court but the rest of the play flies free when the action shifts to  the Forest of Arden. Kimberley Sykes’ inventive reading of this early Shakespeare is  joyous. Her cross -casting made perfect sense in this Shakespearian romp on sexuality, gender and lust.

Sykes  has found a hugely gifted actor as Rosalind. Lucy Phelps has charisma, physical and vocal variety and is a quicksilver presence. She is well supported by Sophie Khan Levy as Celia  who is a terrific singer and comedian. Sandy Grierson, Laura Elsworthy, Tom Dawze, Charlotte Arrowsmith and Amelia Donkor are deliciously daffy as Shakespeare’s various clowns, fools and comic relief. Stephen Brimson’s set was an inventive Arden and the pagan fertility goddess is a clever coup de théatre as a final tableau.