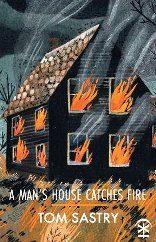 Tom Sastry was chosen by Carol Ann Duffy as one of the 2016 Laureate’s Choice poets, and the resulting pamphlet (Complicity, smith/doorstop) was both a Poetry School Book of the Year and a Poetry Book Society Pamphlet Choice. He subsequently appeared in The Laureate’s Choice Anthology earlier this year. That’s a good pedigree for any poet, but carrying at least as much weight as these official plaudits is a recommendation from a friend. I wonder if publishers realise just how influential word-of-mouth is, and how discussion in poetry groups, backed up by a lively independent bookshop, plays a significant part in getting a poet to the right readers.

I’d already warmed to him via his half-page personal statement in The Laureate’s Choice Anthology because he was refreshingly unstuffy about his approach to writing poetry: ‘I don’t set aside time to write. I write in scraps of time—at lunchtime at work; in a notebook on the bus; whenever I have time at home. For me, the discipline of writing is to do with filling my pockets with things that capture my attention.’ There’s a sense of ordinary life going on alongside his poetry, something bumpy and routine; I suspect most of us would recognise this. He writes about becoming aware of good poets and how this changed him: ‘I started watching the world in a different way.’

This collection is in three sections, each headed by the title of one of the poems, and linked internally by theme and cross reference. Each section begins with a poem about man and fire; each contains a poem with the title ‘The importance of not listening’; each one ends with a glimmer of hope. So often a collection structured in this way reads like three pamphlets bolted together; this one doesn’t. These poems talk to each other across the pages and at the same time talk to the reader; they are poems about surviving in the twenty-first century, about getting through, about coping with the ridiculousness and disaster of everyday. Perhaps a good place to start is with the triolet (‘Catastrophe’) that closes the collection, a poem prefaced by a blank page that separates it from the three sections. (When did this fashion for a poem that feels as though it’s escaped the boundaries of a collection start?)

The sense of being constantly close to melt-down, being vulnerable and helpless, is at the heart of these poems. So, however, is a combination of stoicism and wit that combats what could otherwise be bleak and hopeless. The ‘fire’ in Sastry’s poems is both real, with its smoke and heat, and also metaphorical in that it’s a state of mind – ‘I thought the smell of smoke/ was just me going off my head// which I have learned to expect.’ That’s the opening poem, showing what it’s like to live alongside imminent destruction that doesn’t, this time, happen. It rumbles like low-level anxiety – but isn’t named as such. Sastry writes in the first person but leaves plenty of space for the reader to identify with these unnamed emotions. In ‘Thirty-two lines about loss’ he refers to ‘functioning’ – what we have to do to get through each day. He starts, simply enough, with a small action – losing his glasses –

but then shifts into a more existential examination, the pressure time puts on people, accepting what we’re told to do, and how loss (and surviving it) can be about something more than glasses. Sastry manages to be both specifically anecdotal and universal in his struggle with existence, couched in the vocabulary of everyday. He shows us the awkward feelings we don’t have names for, all the small inner fears and uncertainties. In ‘I was talking with my marvellous man-friend’ he wrangles about the nature of friendships, and how men and women differ

In four quatrains of what is almost colloquial banter he probes the metaphysical – lightly, and with only a sketch of an answer. Sastry is also a performance poet and the organised spontaneity of spoken-word poetry seeps into these poems, giving a naturalness of tone to their confessional content. In ‘House’, a poem of love and welcome about the ‘scuffed bones’ of his home he invites the unnamed friend to

Be truthful: don’t you have a list of jobs like that, all those domestic sins of omission? They are part of the bigger picture, that complex tangle of all the quotidian each of us has to juggle with; it’s the recognition of this condition, and his honest acceptance of it that makes Sastry so likeable as a poet. He can write tenderly about love, as in ‘Waking’ – ‘I dreamt that we were older. It didn’t matter at all’, and about his daughter, in ‘The future, by accident’ – ‘My daughter woke, desperate to dance/ so we kicked and twirled until I was about ready/ to puke.’ That’s a human moment of love and reality; I can’t recall meeting ‘puke’ like this before. In ‘When the light reminds you to look’ he moves through the jumble of the day (email from a solicitor, running for the bus, cursing) from its starting point ‘when the light reminds you to look/ for grace in yourself’ to its conclusion

Pain is inextricable from the beauty of the day; it’s just a matter of trying to get the balance right, or as right as anybody can.

I can see the point of the triolet now. It’s the only formally structured poem in the collection, and the combination of metre, repetition and rhyme makes it instantly memorable. It’s been following me around, like an ear-worm; it won’t let me go. It means I will remember the collection, and how it acknowledges how close everyday life is to disaster—‘a glamour no-one is eager to meet/ a truth that doesn’t want saying.’ It’s that attempt to give words to the unsayable that pulses through the collection. Read it – then tell your friends.

Demise of the Undertaker’s Wife Three Men on the Edge