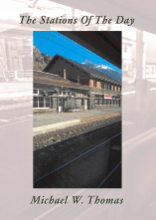 Although this is a very recent collection, the sequence ‘When you were Young’ takes us back to the 1960s, a Catholic upbringing, and school English lessons where children were taught about skylarks, foreign fields and the Charge of the Light Brigade. That’s what a whole generation thought poetry was. It doesn’t appeal to Michael Thomas, whose work is distinctively modern. To demonstrate this I can’t do better than quote the whole of ‘Harbours Hill’, with its shock opening:

This is a powerful poem which speaks, if I understand it rightly, about the loss of religion and a deadly boring childhood.

In the last but one section, ‘Endpapers’, Thomas contemplates, ‘the slowing of your blood’. ‘Time’s clock’ ‘flips back to zero’. We’re all getting older, and the future may be frightening, but the poet can still derive pleasure from the sight of a child being pushed in a buggy.

There are several very melancholy poems here, but Thomas is actually an amusing writer, and concludes with a sequence, ‘Feste Packs’ which gives a new slant on the cast of Twelfth Night.