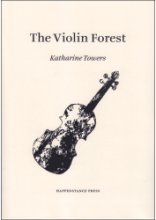 There was a time, a post-Hughesean time, when writing about the natural world was decidedly uncool: your ‘tweedy nature boys’ were as dead as the Georgians and hawk-eyed anthropomorphism had had its day. In the era of Extinction Rebellion, the pendulum, I think, has begun to swing the other way. When ‘Nature Poetry’ is rebranded as ‘Ecopoetics’ we’re back on safer ground. The very word has critical authenticity—no vacant or pensive tranquillity here! But all this begs the question: What is such writing for? Action, perhaps? Awareness? Wordsworth might have said Pleasure, but what did he know?

In her two books thus far—and indeed in this new pamphlet collection—Katharine Towers has never shied away from the celebration, interrogation perhaps, of nature. The Remedies (2015) was very much about flowers, birds and the odd insect, and a quick glance at the titles in The Violin Forest—‘Sparrows’, ‘The Yew’, ‘Untranslatable Owls’, ‘The Wild Ponies’, ‘Snowdrops’, ‘Rosa Mundi’, ‘Mr Dead Fox’—reveals a continuity of preoccupation. There are other themes that emerge of course, in particular her interest in music and musicians. And it’s not by chance that where the two strands meet Towers is at her most atmospheric. In the title poem an old luthier is tapping trees with a stick:

The cuckoo and the owl are there, I think, principally for the musical presence of their calls. (The old man would be more than surprised if a cuckoo’s nest were to fall on his head.) Their hollow, woody sounds are evocative, expressive of tone and pitch as much as any kind of violin sonority. The owl appears again in ‘Harmonium’ where the instrument has been hauled to the ‘dead centre of this Sussex wood’. The music of the language here is plangent and beautifully sorrowful:

All kinds of musical effects are woven into this: the narcotic repetition of the ‘m’s in harmonium, homesick, remembers and autumn; the mystery of the lovely one who ‘used to answer with a sigh’; the turning over of things in the mind perhaps suggesting the blackbird’s turning of leaves; the folksong associations of ‘fado’, with its overtones of fading; the harmonic suggestion in ‘the thrush’s joining voice’… So there’s certainly a melancholy pleasure to be derived here, almost Keatsian in its languor. In the collection as a whole such wistfulness combines with a harder-edged sensibility that can be exemplified by quoting the short poem which follows in full:

The piano is solid enough—oak and walnut—and the description, though brief, is specific: it has, slightly unusually, four pedals. And then comes the crafty synaesthesia of ‘pale chords’ which sets us dreaming again until we’re suspended in an un-nerving world where dawn breaks audibly and in unfamiliar ways. Why might one wish to sleep under a piano? What kinds of suffering have led to the tortured breaking of hands? Just what is this an example of? The unanswered questions are resonant and much more contemporary.

To describe Katharine Towers as a miniaturist would be to do her a disservice: there are big ideas knocking around in some of these poems. However, she seldom strays beyond fifteen lines. The aim is gracefulness—to be pitch-perfect. ‘Chasing after every passing shadow will get you nowhere’. Her sparrows ‘bump and chink on the garden path like / small clay pots, busy with their urgent nothings’ … ‘They think themselves little lords and ladies of the dirt / in which they bounce and splash, perky and unbeholden.’ And her owls ‘stand in the black yews like alien saints’ … ‘They think deeply. They are meditating.’ They may indeed be ‘untranslatable’, but she has a good go:

The seven ‘o’s in this complete prose-paragraph I take to be as much owl-speak as human discourse. The yew (‘It is too gothic, or it is too sullen. / It has no heart to speak of or toy with.’) and the owl are emblematic of a voice which claims at one point ‘I can only extol those things / which are tragic or timeless.’ The small tragedy of ‘Mr Dead Fox’ might be the perfect example: ‘Laid out on the road like a fox diagram’ …the long drawn-out back and the stylish brush / like Isadora Duncan’s upheld scarf— / something absurd and beautiful to blame.’

Poems like this are well served by pamphlet publication. The pamphlet—itself a book in miniature—gives them space to breathe and lets them resonate one with the other. Readers familiar with Happenstance’s high production values will understand exactly how well the press has served the author: with quality paper, lithographically printed at the Dolphin Press, and tastefully ornamented pagination. The art that conceals art has to be achieved with precision thrown off with an air of nonchalance—like the robin in the opening poem that ‘tinkers with a few odd notes in the hawthorn’, itself likened to the soldiers in La Chanson de Roland, ‘who don’t mind about dying.’ And the poem also, which ends with a whisper: