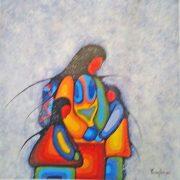 During my last week in Calgary I still had to do some shopping, visit the Glenbow museum, the Zoo and Lougheed house, a villa belonging to a rich Métis family.  The Glenbow Museum is a hub of culture, history and art.  It retraces the history of Alberta from Indigenous peoples to the present.  The section regarding the Natives is rich in artefacts with exhaustive captions and videos.  Their traditions and values, the relationship with nature and the struggle to maintain their principles are well highlighted in the display in spite of all the attempts of assimilation made in the past by the Canadian government.  Alcohol addiction and diseases brought by the Europeans killed a very large number of them; however, their culture survived and they maintained their identity.  It is heart-breaking to see how this magnificent culture was almost effaced, similarly to the bison.  Besides the beautiful masks, costumes, canoes, tools and ornaments, their resilience is testified in workshops and displays of modern artworks.  It is worth noticing that the first European settlers could survive only thanks to the help of the Natives.

The region attracted settlers coming from all parts of Europe.  The immigration rules were rather discriminatory at first.  British and American settlers had priority followed by Northern Europeans, then people coming from Eastern, Southern Europe and Jews.  The population grew quickly thanks to the rich natural resources, mining, ranching and farming.  Gas and oil were discovered at the beginning of the twentieth century which brought wealth but also a considerable exploitation of the land.  Therefore, the inhabitants of Alberta are called mavericks, that is, risk-takers and forerunners; they are explorers and outsiders at the same time.  It is also a story of hardships and resilience, with struggles and tensions that created new settlements and a population that eventually felt responsible for the land, as the national anthem says: ‘O Canada, we stand on guard for thee’.

In the section about immigration the intriguing story of Emperor Pic (Emilio Picariello) is featured.  He was a successful Italian immigrant who owned an ice cream parlour in Baltimore and dealt in bottles and alcohol.  During prohibition, he sold whisky illegally and this caused him problems with the police.   After Constable Steve Lawson injured his son in a police chase, Picariello had an argument with him and Lawson was shot.  Filumena Losandro, who worked for Picariello, was present as well.  The following day Picariello and Losandro were arrested, faced a trial, were condemned and hanged.  It is not clear what happened that day as Constable Lawson was probably shot in the back while he was arguing with Picariello.  Possibly Picariello commissioned the killing but Filumena Losandro was certainly innocent.  She was the last woman hanged in the region.

Interesting exhibitions were on display at the museum as well: portraits of women by women, striking artworks by Nick Cave and Second Skin that brought together works of contemporary Canadian artists.  The museum shop has fabulous prints and books of Indigenous artworks; they feature animals in unique stylised shapes and evoke in forms and bright colours Natives’ legends and values.  The section dedicated to books is particularly rich.  I found the legends of Napi the trickster who deceives and is deceived, weak and strong at the same time like humans but with supernatural powers.  He is also a creator, funny, absurd and sometimes brutal in his behaviour; a loner but also an explorer, always curious of what is around him, ready to help humans but he also takes advantage of other creatures without scruples.  Other interesting books I found were Seven Fallen Feathers by Tanya Talaga, who won several prizes, about relentless racism and indifference that seven Indigenous students undergo in a Northern city, and Aritha van Herk’s Mavericks: An Incorregible History of Alberta.

Lougheed House is an impressive villa built in 1891 in sandstone on the south east side of Calgary, 13th Avenue.  It looks like a small palace surrounded by a beautiful garden, the Beaulieu.  Inside the furniture is dark, Victorian and exquisitely elegant.  Stained glasses decorate the windows and an exhibition of Métis products was on display.  The Métis is a mixed-blood group of Natives, mainly Cree, and Europeans settlers, mainly Scottish, Irish and French men working for the Hudson Bay Company.  Initially they were deprived of their lands like the Indigenous peoples.  Nevertheless, they survived the hardships and continue to produce significant artworks.  A video showed their music and dances which are very similar to the Scottish and Irish Country and Highland dances.  the Métis dancers wore a colourful sash wrapped around their middle or across their bodies and moccasins.   Their artefacts are the product of a mixture of Western European and Native culture as well.  They are highly decorated with beads but have flower patterns instead of geometrical shapes as it is in Indigenous craft.  At the ground floor there is a restaurant where you can have your dinner under the severed head of a gigantic stuffed moose.  The Métis flag shows a horizontal eight figure, similar to the infinity symbol, in a blue background.  The founders and owners of the house were Alexander Lougheed and Isabella Hardisty Lougheed, Lady Belle.  They were an opulent family; he was a lawyer involved in business and politics, she was highly educated and socially active.

I could not miss Calgary Zoo.  I visited it with my friend Crystal who toured me around and took photos for me as, by that time, I had unfortunately lost my phone.  Calgary Zoo is a great place to spend a day.  It was packed with visitors, mainly families and schools.  I would not say it is a traditional zoo but rather a park with animals.  There is Canadian wild life, such as wolves, moose, bears, otters, as well as exotic animals, such as tigers, panda bears, flamingo and camels.  They are well kept in large spaces and everything is clean; there is no litter in the lanes or nasty smells.  The flower beds and plants are luscious; they reflect the environment of the different animals too.  Visitors can also access the lemurs’ area and have a close look at those social mammals.  Giraffes and hippos are peacefully on show in their areas looking healthy and big as in a picture.  I was flabbergasted to see the Giant panda bears.  There were four of them chewing bamboo sprouts all the time and looking like humans.  Calgary Zoo has borrowed them from China for a period of five years.  It is so different to meet them in person rather than seeing pictures or videos.  They look like gigantic babies in black and white.  The butterfly zone is worth visiting as well both for the beauty of its garden and the exotic butterflies flapping around and sucking from flowers and fruit or cocooning.

As I lost my phone, or maybe it was stolen, I declared it at the Lost & Found office but they could not find it.  Luckily, I had saved all my photos on my computer and had only one week to go.  I was in total panic at first, then I realized that instead of taking pictures all the time, I paid more attention at what was around me.  It was liberating in a way.

I shopped everywhere I went.  I bought so many things, from dolls to cards, soft toys, T-shirts, books, sweets, jewellery, etc., that I had to buy a new suitcase.  I also visited the Shopping centres downtown, Eau Claire Market and the Chinook Centre where famous brands have their shops.  As I could cook my food at the Airbnb and I am on a diet, I had only a few dinners out, but I tasted Tim Hortons’ food which I found better than McDonald’s.  They have healthier options like wraps with salad and grilled chicken and little pancakes made with the whites of eggs and spinach.  I must say I indulged in peanut butter and in cherries that I found in big packs at the supermarket but tried to burn extra calories at a local gym, Spa Lady, and attended Hatha Yoga classes.  My last long walk was around a posh area a long way from the centre near St Mary’s Cathedral, 18th Avenue South West, where there are big elegant houses and large gardens.

Packing all the stuff I had brought from the UK and all I had bought in Canada was hard exhausting work.  I had to fit everything in three suitcases with a maximum of 23 kilos each.  WestJet is very strict about the checked baggage, as I learned at Gatwick on my way out when I had to pay an additional fee of £ 60 for my overweighed luggage.  At Calgary airport I weighted my suitcases before the check in and two of them were slightly overweight so I moved some clothes and books from one suitcase to the other but still a pair of jeans and a book could not fit anywhere so I had to put them in my backpack.

Leaving Canada was sad but my life and my family are in the UK.  I spent my last money at the airport to cheer me up, in food, sweets, magazines, a ring and a cup with autumn leaves patterns.  I will go back to see more of this impressive and surprising country and to meet my lovely Canadian friends again.