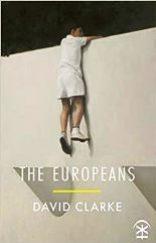 On page 53 of The Europeans, in a poem called ‘Letter to George Gordon Byron’, an undergraduate student wonders of the great Romantic poet “What would he likely say / to Brexit?” Up to this point (with ten pages and four poems left) I had begun to think that Brexit was the collection’s via negativa, ever-present by dint of the word itself remaining unused. But use it Clarke does, just the once, and it flares like a Molotov cocktail.

The particular aspect of Brexit on which Clarke focuses is what stands to be lost, and what is already slipping away. In the title poem, Europeans are viewed through various lenses. The poem opens idyllically:

A stanza later, the Europeans are “wearing bright uniforms / simultaneously grand and preposterous”; and later still the narrator notes bullet holes in mortar where “[s]omeone had been shot / heroically on every corner”. The narrator marvels as they take to forests in winter:

National characteristics seem ambiguous (“volatile or taciturn, hearty / or shiftless. Really, you could take your pick”) but what is certain is that the Europeans have “much to say of poetry and much silence to pay it into”. The sense of the slightly bewildered Englishman abroad, half fascinated and half perplexed, is underlined in the final stanza. I’ll leave the reader to discover it for themselves; it rounds the poem off beautifully.

‘Invitation’, which opens the collection, is a masterpiece of understated fin de siècle.

No EasyJet budget package tourists stumbling comically about here! This could be the the Grand Budapest Hotel of Wes Anderson’s film, or is that Dirk Bogarde’s von Aschenbach in crumpled white suit and panama in the background? Melancholy swirls through the poem like the Adagietto of Mahler’s Fifth: there will never be enough time to “wake just once in all its pristine rooms, / to step lightly onto every balcony”.

If all of this makes Clarke sound like a dewy-eyed sentimentalist ruing everything the Leave hard-liners and the no-deal Parliamentarians are trying to trample down into the landfill of international relations, then the fault is probably mine. There is no false nostalgia to his work. Consider ‘An Exchange’, which captures in squirmy detail the combination of overawed excitement and social embarrassment that will be familiar to anyone who participated in a foreign exchange during their schooldays: from the “muggy coach” to the “reasonable towns” with their “closed arcades, precincts tiled / in abstract forms” to the overnight accommodation

The experience is coloured by an unshakeable cloud of suspicion and mild resentment that can probably best be described as simply being English, where even an ice cream courtesy of one’s hosts tastes

and behind everything is the thought of “all those grandpapas // who came home missing pieces of themselves“. ‘An Exchange’ bridges the poems about Europe and those in which the quintessence of Englishness is pinned down like a butterfly under glass: ‘To a Black and White Portable Television’, ‘To a Public House’, ‘To a Stately Home’, ‘The Towns’ and ‘The Villages’, all of which deserve to be quoted from an discussed at great length. However, this is an online review not a monograph and, as noted previously, the reader deserves to discover the facets of this collection for themselves. Suffice to say that the unvarnished, realistic “way things were” aspect of these pieces, refuting little England wistfulness for a past that never was, is a slap in the face to Brexit’s chief architects – as is ‘In the Snug’, a hand grenade of a villanelle:

Hmmm, wonder who that could possibly be?

While ‘In the Snug’ targets one particularly nasty piece of work, the prose poem ‘Let Me Be Very Clear’ is an amalgam of similes that politicians and those in the media have employed to try to describe Brexit and how the machinery of the UK’s withdrawal will work. Random sampling: “It’s like the Blitz, like a military coup, like a punishment beating, like the Treaty of Versailles. It’s like Schrödinger’s cat, like a wolf without a collar, like a dog that caught the car.”

These nakedly political pieces – along with ‘The Defence of Bureaucracy’ and ‘England, I loved you’ – are the stepping stones to ‘Letter to George Gordon Byron’. Like ‘In the Snug’, it embraces a set form – the ottava rima. The first stanza acknowledges Byron’s mastery of the form as well as functioning as an apology of sorts. “We keep / on coming back to you, we scribblers, entitle / ourselves to your estate of rhyme”, Clarke notes, adding “My weak / efforts more a sideways way to speak // of troubles you would no doubt recognise.” The self-deprecation is winning but it’s a case of false modesty: Clarke shifts into overdrive for the second stanza and doesn’t let up for two and a half pages.

‘Letter to George Gordon Byron’ is a showstopper, an excoriating state-of-the-nation piece, a takedown of a “puffed-up England” which “sneers again at all / that’s foreign”, a country that has lost its way under the incompetent guidance of “toffs [who] are cheered by plebs they despise” and the divisive rhetoric of “our free press, / the voice of England’s bigotry and smugglers”. Clarke swings hammer blow after hammer blow against everything that’s wrong with the contemporary state of affairs.

It would have been all too easy to end the collection with this poem, but Clarke is smart enough to allow the reader the decelerate through four more pieces, including the slyly structured ‘Station to Station’ (which includes a bluntly accurate summation of Nottingham Central, the rail hub that serves my home town) and ‘The Vision of Albion’. This latter is the poem that actually does close The Europeans and Clarke foregoes the earlier howl of furious protest for something quieter, deeper, more insistent; a perfect conclusion to a collection that doesn’t put a foot wrong.