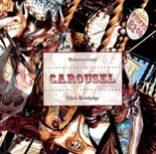 Carousel – an intriguing combination of words and images

Carousel is a collaboration between one of our finest poets, Rebecca Goss, whose book, Her Birth was shortlisted for The Forward Prize. Chris Routledge is an acclaimed conceptual landscape photographer whose work has been used on book covers and in magazines including National Geographic. This stylish square book beautifully presents his photographs, in colour or monochrome. Each one is paired with a poem by Goss. Both artists have a way of looking slant at things – for example, the photograph of a basic old grey stacking chair, the type which once infested public buildings, sits against a rock face, its back with a jagged split and its metal legs making stripes through grass and weed, goes alongside a litany, a prayer. Each line starts with a simple anaphora which builds up to the ending:

This poem brings out the plaintiveness of the photo, yet manages to leaven with wit, by giving new life to the saying ‘between a rock and a hard place’. Another such poem, is ‘I FELT YOU AND KNEW YOU LOVED ME’ in which Goss provides a voice for a naked white shop mannequin disappearing into a reflection of a beautiful brick building. The dummy addresses a man who she thinks comes to gaze at her through the window. He cannot hear her, because she cannot speak, but her gestures have a message:

All that he can imagine is dressing her, and so this ending implies she should be wearing a watch. The building she is in looks empty, save for her and a reflected clock on the wall. It is suggested from the photo that the shop is soon to be demolished with her in it. The poem has only 12 short lines but it says so much. The theme of lost or abandoned objects continues in ‘TALL GRASSES’, in which both photograph and poem depict a pair of trainers hanging on a barbed wire fence. The black and white shoes stand out against the bleached grass, which gives a strong idea of texture, against the straight lines of the fence and a brown fence post. The poem imagines who left them behind. I love the phrase ‘wayfarer in green-stained socks’.

In ‘MOORFIELDS’, a Liverpool metro station, Goss imagines a moor growing under her feet, complete with heather and bracken. The station couldn’t be further from moors, except in its name. Here, photo and poem contrast. Only the poet sees the moor; the other passengers see what is in the photograph, black and white barrenness. Another contrasting one is ‘PLEASE STAND’, inviting an office worker to go into the sun, from the dark office of the artwork, where only one ray of light illuminates face and blue shirt. The contrasts set up a pleasing tension between the images and the words, suggesting conversation and debate.

Just as the photos vary in style, Goss has chosen different forms for these poems. Most are short enough to fit one page, but not all. The shorter ones sit nicely in the centre of the square pages (square books are pleasing and rare), with generous amounts of white space round them.

There is also wit underpinning many of these poems. The landscape photograph features fields of oilseed rape and a stormy sky, and is filled with that strange light which presages a storm. The accompanying poem, SQUALL, begins ‘this isn’t Kansas’, a reference to The Wizard of Oz. This phrase puts a connotation of the ‘yellow brick road’ into the reader’s mind, and brings Dorothy and Toto into the next frame, especially as Goss mentions ‘the holler of a dog’. The actual photograph is unpeopled, but the poem suggests a soundtrack which includes people. The coming storm will stir up the area and everyone in it, just as the tornado changed lives for the people in the film.

The title poem, CAROUSEL looks back to lost childhood pleasures suggested by the black and white photograph. The tin horse is blurred to show speed, as the ride is in full flow, and the sharp focus is on the background, the ornate decoration and signs suggesting a more innocent past. Goss concentrates on the senses and how it felt to be sitting astride one of these horses, but the ending of this short poem has a twist:

This is an ambiguous line the reader may interpret several ways. Is it one’s own childhood face that the speaker comes back to, or the face of a loving parent watching from the sidelines? This ending increases the sense of loss of the past, and the longing to return to that time of simple joys.

Another poem that has a melancholy tone is ON CHECKING-IN. The cue from the photograph is a double bed with a single pillow on one side. In the poem, it is two people who have checked in, but they are shy with each other, because ‘a hotel makes you feel like strangers.’ The bed, as they seem to do nowadays in hotels, has been made very tightly, so that sheets must be untucked before the bed can be slept in. There can be a spare, barren atmosphere in some hotel rooms, but some of the lines suggest the occupants are not comfortable with each other. The reader can only guess why.

Overall, the book is a very successful collaboration. Both poems and photographs are rather disquieting, and the reader is invited to bring their own interpretations to some of the poems. Collaborations can push both sides of the team to go beyond their usual approaches, and make fruitful new work together they would never have made on their own. That is definitely the case here.