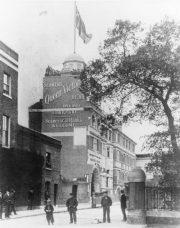 East India Dock Road, site of Queen Victoria Seamen’s Rest forms part of the A13, which links Aldgate in the City of London to Shoeburyness, forty miles away on the shore of the North Sea – so, not the most obvious place to build a refuge for seafarers.

Like so many other roads in East London, its history is well hidden among the low-rise social housing, cost-cutting supermarkets, betting shops, outlets for Bangladeshi, Chinese and Vietnamese food and fried chicken shops, with traffic running east and west in never-ending streams making a further barrier to quiet contemplation of the past.

Queen Victoria Seamen’s Rest stands in a neighbourhood, where a closer look reveals over two hundred years of East End history.  There are elegant stucco villas built for Poplar’s wealthy residents in the early Nineteenth Century; the art deco façade of the public baths erected by the municipality for the health and well-being of poor families living in over-crowded accommodation lacking proper sanitation.  A bronze statue of Richard Green, local shipbuilder, owner and philanthropist has sat on a granite plinth outside the baths guarded by his Newfoundland dog since 1866.  About five minutes’ walk from the Rest, a fine Georgian church, All Saints, is a memorial to those wealthy parishioners who lived in Poplar in its heyday.  Economic boom and bust, intensive industrialisation, the appalling social conditions that come with it, and the practice of philanthropy to relieve its effects, have all left their mark on the East India Dock Road.

The docks built along the Thames and on the Isle of Dogs from 1800 onwards created the trading heart of the British Empire and became a magnet for sailors from all over the world.  They arrived from India, China, Africa, the Caribbean and all corners of the British Isles and some settled.  Queen Victoria Seamen’s Rest is part of the legacy of those crusading Methodists who set up the Wesleyan Seamen’s Mission in Cable Street in 1843, to bring the Gospel of Jesus to the seamen and their families, for their spiritual and moral uplift.

The Methodists were not the only philanthropists in town – the East End formed a crucible for the activities of anyone inspired to do good – but they were some of the most numerous, energetic and successful, and with their commitment to spreading total abstinence from intoxicating liquor among the seafaring population, certainly had their work cut out.  Boozers and brothels were everywhere and made their money out of sailors between voyages, who squandered pay owed to them after months at sea on drink and sex, leaving their wives and families destitute.

The Mission provided reading and prayer rooms, as an alternative to more earthy pursuits, and classes in seamanship.  During the rest of the Nineteenth Century its ministers and dedicated volunteers spread the word throughout Poplar on behalf of the Methodist Church and built new premises for its congregation to gather in on the corner of Jeremiah Street and East India Road, as well as continually improving and expanding accommodation for sea farers.

The Reverend David Roe was appointed in 1898 to head the Mission and dropped “Wesley” from its name with the intention, perhaps, of broadening its constituency.  In the early Twentieth Century many of the Mission’s activities were devoted to fund-raising in support of a further programme of expansion, and while finding money was always a struggle, the involvement of the royal family as patrons proved a boon.  Renaming the Mission as Queen Victoria Seamen’s Rest in 1904 marked the year of her death and confirmed the strength of the royal connection, which became an enduring one.

The years between 1914 and 1957 were turbulent.  The bombing of two world wars caused terrible damage to the Mission’s buildings and the General Strike of 1926 threatened financial ruin, but they survived.  After the Second World War plans for the Rest you see today on East India Dock Road took shape, and were completed in 1953.  In 1957 the Poplar Mission of the Methodist Church assumed greater responsibility for the Rest’s more spiritual functions, freeing it to concentrate more closely on welfare work, but the relationship between the two remains strong to this day.

Today, the Rest seems to be experiencing an unusual period of stability.  It provides residents with hotel-standard accommodation, a self-service restaurant, a games room, opportunities for training and advice on claiming benefits among other facilities and celebrated its 175th anniversary in 2018, an amazing achievement, when you consider its story could have been all over by 2010.

A revolution in the shipping trade, initiated in the 1960’s, brought radical changes to the Queen Victoria Seamen’s Rest.  The costs of importing and exporting goods could be reduced enormously by sending containers of cargo on huge new ships all over the world, instead of loading them into the holds of   vessels small enough to sail up the River Thames.  Container ships docked in the deep waters of Tilbury and Felixstowe where goods could be distributed more efficiently using fewer workers for greater profits.  The effects on the East End of London were disastrous as thousands lost their jobs in the docks and associated trades.  By 1980 they were deserted and the local population faced the devastation of their economy and community.

Along with the docks the seamen disappeared from the East End and the Rest opened its doors wider to homeless ex-servicemen, as well men with no background in seafaring, to plug the gap in income.  Years of struggle ensued and at times the Rest’s prospect looked very bleak indeed.

Raising money for single, homeless men is a tough call.  They don’t have the immediate appeal of, say, needy children and many will have experiences of addiction and broken relationships which have left their mark.  For much of this period Tower Hamlets’ housing policy focused exclusively on homes for families.  Even potential funders with a remit for working with seafarers simply couldn’t see the point in maintaining a project based in Poplar, but the staff of the Rest could and didn’t give up.

They carried on searching out the charities who did share their outlook and made successful grant applications.  In time, Tower Hamlets turned their attention to homeless men and began to co-operate with the Rest to do something for them.  In the end, the Rest raised the nine million pounds necessary to transform it into the comfortable, welcoming space for residents and staff, which was the result of the developments initiated in 2009.  The Rest now has a reliable annual income, and its future seems to be on a more secure footing than it has been for a long time.

You can find out more about The Queen Victoria Seamen’s Rest at their Website: https://www.qvsr.org.uk/

The Story of the Seamen’s Mission of the Methodist Church, The Queen Victoria Seamen’s Rest “Saving Jack” was told by David Hurrell and Alexander Campbell as part of the celebration of its 175th anniversary.  You can obtain a copy of this beautifully illustrated work by getting in touch directly with the Rest.