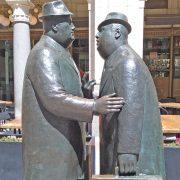 Before planning my journey to Canada, I made a list of my priorities.  At the top of it was experiencing the country of the author I am studying for my PhD: Margaret Atwood.  I had chosen to visit Calgary, Alberta, because of my contacts with the Freefall magazine that had published one of my reviews in the past.  I also had contacts at the University of Calgary and wished to expand my research there.  Unfortunately, before leaving I had problems with my student visa, whose requirements are similar to a working visa.  I visited the visa office in London several times and they told me that the tourist visa was not enough.  I handed in all the requested documents, included several bank statements, certificate of marriage and my parents’ and children’s emails and addresses, but they were taking such a long time to issue it that I finally decided to leave with my tourist visa only.

The flight was good, though we had lunch served after 4 pm because of air turbulences.  I watched two impressive films to pass the time: They shall not grow old, a documentary film on the First World War with young men shyly smiling at the camera totally unaware of what was to come.  The landscape was devastated with flooded trenches and corpses everywhere.  The other film I watched was The Drawer Boy, a wonderful story of recollection of memories prompted by story-telling.

At Calgary I had booked an Airbnb whose owner, a guy originally from Cameroon, kindly toured me around the area on my arrival.  He showed me the nearest shopping centre and the train station and waited for me in the car while I was doing my first shopping at the local supermarket.  In twenty-four hours I collected a monthly bus pass, and three cards: one for the supermarket, one for the Central Library and one for the gym.  Unfortunately, I could not attend the university or access their resources as I did not have a student visa.  It was issued, eventually, but I had to leave the country to collect it at the border, that is, go back to the UK or go to the US.  I gave up and looked for other options in town.  The Airbnb was comfortable and clean.  I could cook my food, which was great for my ongoing anti-diabetic diet.  The Wi-Fi connection was good though the landowner kept changing the password at first.  In the living room there was a big clock with the time set on Cameroon time zone and three identical pictures of him in a dark suit.  The weather was fine most of the time with unpredictable changes.  What the weather forecast called a ‘breeze’ could be sudden gusts of wind that brought heavy dark clouds and possibly a storm.  But you would never know as the wind might play its tricks sweeping the darkness away, instead, and making the fierce summer sun shine again.

What struck me at first was the vast horizon, the boundless landscape and never ending straight roads, that looked like motorways to me.  The sky was amazing, wide and unsettled, in constant change.  I took photos of the area, which was a working class area, with its small wooden houses and neat lawns or gardens on the front.  Another thing that impressed me were the electrical disguised boxes, that is, they were not in dull grey or black but painted in bright colours with figurative or abstract images.

Walking up and down to reach the train station or the shopping area, I met people who were mostly from Asian or African background and who spoke their own language to each other, even the younger ones, I mean the second or third generation.  It seems that keeping their mother tongue is encouraged in Canada, so besides learning English and French at school, Canadian people maintain their mother tongue, which can be one of the hundreds of languages spoken in India or in some African countries.  This is uncommon in Europe or in the US and might be a peaceful solution to avoid ethnic tensions and have a more balanced sense of identity.  Diversity and inclusion are two key words in Canada that characterise the openness of the country to different cultures.  This also emphasises a distinctive concept of integration compared to the most common idea of mixing cultures as in the American melting pot.  Therefore, ideally there is not one emerging idea, typically the White Man’s values, but several different ways of being human that coexist side by side.  In this view, Indigenous languages, legends and customs are a sort of foundation that is always present and though, at the same time, First Nation peoples are at the margin of the Canadian culture.  They were sadly undermined after the arrival of the Europeans and sometimes eradicated or mistreated.

From the Airbnb, I could easily reach the train station of the over ground blue RTN line which took me to the city centre in ten minutes.  ‘This train to 69 Street’, announced the voice, and I was smoothly transported in the modern downtown.  On the way, I had glimpses of the green landscape and of the Bow and Elbow rivers crossing at Bridgeland.  I visited three main landmarks in the first week: Calgary Tower, St.  Stephen Avenue and the New Central Library.

Walking through the centre of the city from the City Hall across Olympic Plaza, you are startled by the glass skyscrapers reflecting the changeable sky and by the gorgeous display of bright flowers in baskets.  Green, yellow, purple and pink beavers’ heads poke form a wall and in a corner of the square there is the monument to the Famous Five by Barbara Patterson.  They were five outstanding women who worked together to promote the vote for women as well as social reforms.  Henrietta Muir Edwards, Nellie McClung, Louise McKinney, Irene Parlby and Emily Murphy were devout Christians and activists who worked together in Alberta.  They wanted women to be legally recognised as ‘persons’; this seems to be obvious today, but it was not at the time.  Women were granted voting right in Canada from 1916 in some provinces, but apparently it was not until October 1929 that the word ‘person’ included both sexes.  This meant that women could access to public office positions such as magistrate or MP, which were not allowed to them before.  The Famous Five fought for thirteen years to obtain this right, an encouragement for today’s women to continue to fight for equality.

Across the road there is the Arts Common centre with theatres, a Concert Hall and spaces for exhibitions.  Carrying on you enter 8th Avenue, also called St.  Stephen Avenue, the liveliest and most attractive street downtown.  Besides the Glenbow Museum and renowned shopping centres, such as Hudson’s Bay, Devonian Gardens and Bankers Hall, there is street music, cafés, restaurants and nice little shops that sell everything.  You can find the typical maple syrup in all versions, bottle, biscuits, sweets and butter, and moose droppings (peanuts coated in milk chocolate), leather cowboy boots and bags, jade jewellery and objects (jade is extracted and produced in British Columbia), buckles, cowboy hats and T-shirts with engaging phrases.

A few steps and you are at Calgary Tower, an almost 200 metres slender landmark whose view from the top is impressive and gives you a definite idea of the boundaries and shape of the city.  There are taller edifices downtown, such as the Bow or the Brookfield Palace, but the experience of going up to the top of the Tower in a few minutes and looking down at the city from the glass floor is unique and slightly disconcerting.  You feel suspended and open in a vast boundless plain crowded with modern elegant buildings in the centre then sparsely landmarked as you gradually gaze towards the horizon until the blurry bluish shapes of the Rockies.  Calgary Tower was built in 1967 to celebrate Canada’s 100th anniversary and was called the Husky Tower at first.  It must have been astonishing to see the Olympic flame burning for sixteen days on the top of the tower in 1988.  After more that fifty years, it can be still considered a great achievement and a significant sign in the story of the city.

The mythical New Central Library was the Mecca of my studies.  It is a shelter and a favourite working and playing space as well as a performance area for the many people that attend it daily.  More places I visited will be in my next piece.