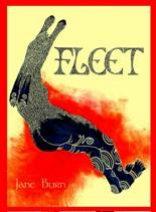 Fleet is a highly original sequence of poems, which could be described as a verse play for radio. It is set around Ferry Landing, created after WW1 to provide self-build housing for poor workers, an off grid and eco-friendly settlement. The poet and artist lives there for much of the year, and closely observes the wildlife around. It is this experience which inspired these strange and wonderful tales of women who can become hares. The sequence tells the story of such women – for example Julian Cox, aged 70, who was executed for witchcraft in 1663 – in a slant way, The series of voices heard are all those of women, itself unusual, but it is Burn’s richness of imagination which provides the linguistic excitement. For example, the voice of Daughterhare:

Fleet, the main character, was born weak, legs first, born different, eyes open, fur already grown. The reader follows the self-realisation of Fleet, as half woman, half hare, able to slip between forms but belonging to neither:

For anyone who thinks this book might be cutesy, a sort of Watership Down for women, think again. It’s more Grimm than Disney, and includes some disturbing material such as a poem about rape, where afterwards Fleet sits in the bath: ‘Sit like a recipe/ jugged in my own blood’
.
Anyone who knows Burn’s work will be aware that her language is rich and strange. She often uses compound words, a palette of colours and a lot of attention to detail. The rape affects the character of Fleet:

At times, the language can be dense and overly lush, but that is reminiscent of Dickens and his decorated style. If you like your poetry spare, this book may not be for you, but as a narrative poem, the richness of style slows the story and therefore makes it more of a multi-dimensional experience for the reader, helped by the first person narration, so we have access to Fleet’s emotions and perceptions, which are heightened by belonging to two worlds.

Although it refers to the execution of witches, it has a modern setting. The pregnant (as a result of the rape) Fleet, dwells on the past:

When Fleet gives birth to Daughterhare, she is overcome with love, and relieved the child resembles her mother, not her rapist. In the end, the hare women deal with the rapist to protect others, in a way that is left to the reader to imagine. The women take refuge in their hare form, return to the Neverworld for good, leaving a note on the kitchen table of their human house, in case another woman like them comes there in the future. This closing poem is lyrical, and full of acceptance of their true nature, and is a spell for goodness and safety:

This spell offers peace and instructions for a way of life to honour the hare woman and those unfairly killed for being witches. It is a powerful narrative and the verse form is very well managed throughout. Burn’s imagination has allowed her to construct this transformational narrative, which works on several levels. The reader may not open all its mysteries on one reading. It would be tremendous to hear it performed.