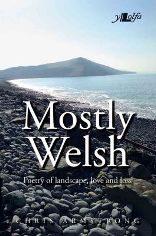 Wendy French considers a sizeable collection by Chris Armstrong and finds it honest about love, loss and the joy of being alive

This is an interesting and heartfelt book written by a poet unknown to me until now. The book is accurately described as ‘poems of landscape, love and loss’. But Armstrong is not just locked in nostalgia. The poems travel a long way and are rooted in the Anglo-Welsh tradition where landscapes can be inter-woven with the self. Armstrong speaks from humanity: our place and our emotions are both based in the soil/soul of the land. He never strays into the sentimental but the language is fierce, simple and practical to convey the deepest of feelings about loss and the love of the Welsh land.

This haiku is one of the three that end the collection and leave the reader dwelling on distant shores, some so far away we will never meet them and some that are lost to us now – shores we never want to return to and shores we still long for.

There is variety of poetic form in this book. There are haikus, a two-person dialogue, long and short poems all with dissimilar content so the reader needs to keep alert to new ideas.  I found the poem, “The Traveller” particularly pertinent and sad. After the war there were so many men like Alf Smith, the subject of the poem, who had seen many things and lived through dreadful atrocities only to return to roaming the Welsh fields and farms until they finally found somewhere to settle down and live out their days.

The prose poem (to me it is prose poem) “Autumn” stands, as many autumnal poems do, for the in-between existence at the meeting of spring and winter. The everyday images and language in this poem emphasise what a short life we have on earth.

The book is divided up into three sections, “Mostly Welsh” (the title poem is included in the first section). “Reminiscences” and “Journeys” make up the other to sections. However, in the “Mostly Welsh” section Armstrong looks beyond Wales and Welsh culture to embrace other cultures and nationalities too.

“Reminiscences” is a moving section about his lover’s/wife’s illness, diagnosis and death. The poems explore the physical and emotional pain transmitted between loved ones.

This book is truthful. It is honest about feelings, love, loss and the joy of being alive. But there are also reflections upon the often, inadequacy of words:

Armstrong’s poems have an immediacy. They are rich in a spiritual language and rhyme. They vary in poetic form but are held together by a tone that remains constant throughout. Even the long-verse poems display the same poetic device of keeping to a reflective tone that is echoed in the content. “Retrospective” and “Water” are two ambitious attempts to take the reader forward into a different landscape. I found the long poem, “Rooms” to be particularly compelling to read.

It was a well-judged move by Armstrong to make his last section consist mainly of long poems in which his earlier thought and themes could be developed. This leads the reader of Mostly Welsh to a satisfying conclusion. His very last words are this haiku:

This is a strong, intelligent and original book, the words of which penetrate many layers of existence.

Wendy French’s latest book is Thinks Itself a Hawk, published by Hippocrates Press