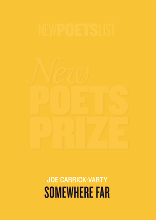 Somewhere Far is a debut pamphlet, winner of the The Poetry Business 2017/2018 New Poets’ Prize adjudicated by Kayo Chingonyi. That information is enough to raise expectations and this pamphlet meets them in every way. It contains twenty-five poems and a list of Acknowledgements which includes The North, Magma and PN Review. While acknowledgements are not the only way to assess a pamphlet it’s usually a good indication that the poems have already appealed to a range of editors.

What is immediately striking in these poems is the consistency of tone. It’s as though the poems have been allowed sufficient time in each other’s company so that they echo, reflect and expand their over-arching theme – a personal sense of distance and loss. They have matured slowly as memories emerge and the past is distilled. It’s there in the title which at first seems imprecise to the point where it scarcely catches your attention – yet, after reading the collection, is exactly right. Carrick-Varty doesn’t spell out how his father disappears from sight; there is no dividing line between here and not-here. Instead he lets a combination of detail and cloudiness evoke his father’s presence and degrees of absence.

The opening poem, “Parks”, shows absence, but not what has caused it

A poet, a library, and a trapped pigeon: but the pigeon represents ‘my father’s mind’ (not just ‘my father’) and this is a key phrase, appearing three times in three stanzas. The sense of longing in this single-sentence stanza is shown in the understated contrast between the ‘I’ll believe’ and the specifics of his father’s appearance. It’s left to the reader to consider the distance between mind and appearance, as well as between imagination and reality.

The title poem introduces other distances: between the child outside the betting shop and the father inside; the father’s ‘Don’t come in, you mustn’t come in’ and the obedient child’s lack of quoted speech; the betting shop’s interior and the horses ‘making their way from left to right/ across the green light of somewhere// far from here.’ The poem’s quietness shows the child’s acceptance of this normality; childhood is always normal, until our adult selves start to examine it.

Carrick-Varty’s father haunts these poems and his dreams. He appears ‘almost drunk,/ struggling with the lock on the french doors/ of my childhood’ in “In Amber”, and via a text message in “All of a Sudden” where a distorted time-scale acts as a flash-back to his father’s death. It links the past with Carrick-Varty’s present, and how a relationship and a new flat are also haunted by his involuntary memories.

Death flickers at the edges of these poems, naturally; it’s a part of the whole life. In the midst of life we are in death: not every reader warms to this recognition of mortality but I do. In the sixteen lines of “At the end” he moves through the specifics of a footpath climbing out of Oxford, (‘ …that grass path, you know,/ the one you cross the ring road to reach’) and the garden centre it passes, along with the excuses visitors make (‘…all poke our heads in, all we’ll only be a minute’), to the summit. The ‘you’ being addressed in that colloquial opening sounds like a partner, a fellow-walker and one who has also enjoyed eavesdropping in the garden centre, but the ending brings in a layer of ambiguity. Has the ‘you’ widened out, perhaps including his father?

I find this mix of connection with the dead and the anticipation of the poet’s own death, so lightly sketched in and with the smallest fleck of irony, a warm and comforting touch, and the ambiguity a strength. It lines up well with “Your bicycle”, in which the garden has grown through and into the abandoned bicycle, an indication of how long since his father was around to use it. The garden was a shared space for father and son, a place where making a pond had failed, where there is a trace of guilt at how neglected it has all become.

The syntax falls naturally, the monosyllables carry the quiet introspection well; there are no answers, just a question hanging. For Carrick-Varty the future, distant but viewed in the same quiet register, has the same intimations of mortality – precise and unsentimental. The final poem, “Impacts”, points to the uncertainty of what might, or could, happen

In his brief note on the back cover of this pamphlet Kayo Chingonyi describes these poems as ‘assured and beguiling’ – and they are. It’s not all about his father’s death. There’s love, too: some poems show the tentative beginnings of a relationship, then how it grows. These poems are human and humane; Somewhere Far is an excellent debut.