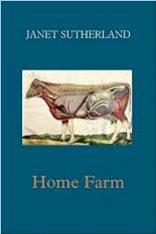 Pam Thompson considers in depth a collection by Janet Sutherland which uses personal recollection as a starting point for dealing with wider issues.

Home Farm is Janet Sutherland’s fourth collection and explores her childhood on the 90-acre dairy farm rented by her parents in Wiltshire. The collection is more than a series of recollections of growing up: Sutherland is consistently attentive to precise details of landscapes and people and to the interplay of time and memory, most movingly in poems referring to her mother’s dementia and her father’s illness and death.

The book is attractively designed with its front and back cover images of cows and luxurious cream pages, and is, as Gillian Allnutt says in her blurb on the back, ‘generously inclusive in its referencing and recycling of a wide variety of texts from “the real world”’. These texts include family letters, maps, a coroner’s report, a bill of sale of items of a dairy farm. These appear both in the poems and as the book’s illustrations. Explanatory notes add more depth.

Home Farm is arranged in six sections: ‘Water Meadows’, ‘Stocktake’, ‘Home Ground’, ‘Evenings on a Farm near Alderbury’, ‘Birds and Beasts’, ‘Tracks and Pathways’, and an Epilogue, which comprises three poems, each with a main title “Listening to Fallujah”. Though each section has a particular emphasis, there are connections between them, thematically and stylistically.

The first section establishes a definite sense of place and history; the present overlays the past. Motifs of ‘river’ and ‘snake’ wind through the collection, sometimes colliding in metaphor: ‘The river is a snake that opens its mouth and sings, looping and undulating, leaving / a sloughed skin oxbow by its side.’ (“At Cuckmere”) The voice of The Drowner recalls ancient practices in the cultivation of the land and its husbandry: ‘I open veins. I cut them with a knife. I draw the water in / and drive it off.’ (“The Drowner”). A few poems in, Sutherland’s flexibility with form is evident. In “Standlynch Mill, the gardener’s girl”, the death of Dora Beesley is recounted in the spare language of an inquest report; in particular, the repetitions in the final two lines deliver the poem’s emotional charge: ‘Nothing / he did could make her breathe again / Nothing he did could make her breathe.’ The language is unshowy but exact. A seeming ease of expression belies an acute consciousness of lineation and structure, for instance, in “The Eel House”, where, in just eleven lines, the poet directs us where, and how, to look:

There are perspective shifts again in “View of a Water Mill and its Eel House” which is an important poem for the whole collection with its impressive deployment of several different fonts and its striking visual form, and in the way it captures words, phrases and ideas that are to circulate through the collection. This is a concrete poem: mimicking the shape of its subject is what concrete poems do, and here, the poem is eel-house shaped. Going beyond the merely decorative, Sutherland employs different font types and sizes to encourage multi-directional readings where each reading is a new opening: read horizontally across the page for details of the construction of the house, its location and initial inhabitants; but then read each different font downwards and diagonally for different threads of images / fragments of narrative that recur elsewhere. It is an ingenious construction; I’d love to hear more from the poet on how she did it and how long it took.

In “Stocktake” the focus is on just that, the stock of the farm, beginning with a personal inventory from the poet’s mother’s accounts. A short poem explains:

Matter-of-fact activities and procedures on the farm feature in this group of poems: getting rid of warble fly, ‘the larva tunnels through the flesh, / makes the fly a ferry boat to overwinter in’ (“The Great Warble Fly Eradication Schem”’); delivering a dead calf, ‘… a hand pump, krey hook and a calving chain, / a length of braided saw wire with its introducer.’ (“Braided Wire”); or bloat, ‘ Stick it with a knife and twist the blade’ (“Bloat”). The poems form a satisfying whole; they are never descriptions for description’s sake, butform part of a narrative whose emotional impact is delivered by metaphor and is presented as cyclical and inevitable.

The poems in the section ‘Home Ground’ are mainly about the poet’s remembered past, beginning with an actual symbol on an OS map and a facing list of names, some in fainter print than others, ‘Stony Ground, East Close, Home Ground, Muddy Track …’ (“Fields and Copses”). The poems are sensual, alert to the smallest perception: ‘Extraordinary light is coming in across the farm, …’ (“metal window left ajar for air”); in “Cows in Fog”, ‘Their disembodied heads turn / as I come to fetch them in’ but these cows are embodied, ‘Fastened to the earth …’ if only partly seen. When the poet leaves home the rituals continue as words in a letter. ‘The cows are going down / to Stony Ground today.’ (“Postmark 1977”). Janet Sutherland makes and re-makes these places and sensory experiences for the reader, adapting the form of the poems accordingly. In “Tracks”, for instance, the corporeal has given way to the evanescent and instinctual, occasions of extra-spacing emphasising the poise of poem becoming painting becoming poem again:

Even more spare, ‘the trees outside are grey on snowy slopes’:

The move from outside to inside is seemingly unpeopled; but further reading brings the realisation that the ‘slippage’ is not just from trees; the poet’s mother is showing signs of dementia, the father, signs of age and illness; ‘the heart’, featuring both literally and emotionally in her childhood. The long poem – in eight sections – “you hold in your head a notion of the land”, brings the urgent voice of the adult piecing together memories. It recapitulates details mentioned in previous poems, but is more revealing of the child’s anxieties, not least about her mother, “You’ve seen your mother fall and fall, / and fall and fall and never cry, although / you’ve heard her slur …”.

In the section ‘Evenings on a farm near Alderbury’, the failings of the mother’s body and mind become more pronounced; both mother and father reach the end of their working lives and the farm is put up for auction. The four poems titled “Dilapidations” are of different ‘dismantlements’, each written in a specific style:

“Everyday Ataxia” tracks the increased efforts for the mother to carry out her work as her condition worsens, ‘Distempered brick will prop her if she stumbles / and brush the cotton of her milking coat with chalk.’ In “Measures of distance”, there are memories of the father as he nears the end of his life: in that January, fish ‘… wait suspended’, a kind of suspension that happens in the last moments of life:

The poem is affecting for several reasons: its structural poise; its pauses and silences; the verbal and visual enactment of its subject, not least the inclusion of words of a letter from the poet’s grandfather to his son:

Sutherland reaches a long way beyond the farm while simultaneously keeping close to it. In the section ‘Birds and Beasts’, the story of Pepys coming across a nightingale, connects with the poet, hearing the bird in the present, while, at the same time, triggering memories of the past:

A bird’s song, the nightjar’s, ‘sings for the soul’ of Margaret Godell who would otherwise be forgotten, ‘ unpaid plainsong / for her room in heaven.’ (“To the Nightjar”) The birds and animals carry out their seasonal pursuits and, being watched, release emotions in an onlooker: the kingfisher, seen unexpectedly at a spot on the river where usually there was only a half-submerged blue boat: ‘suddenly ripped my heart / in the same place— so full of joy, / there were no words, just an old loosening.’ (“Upstream”)

A reface page to ‘Tracks and Pathways’ contains words in a circle; a circle of words. Here, imagine this as a circle of words: ‘The word is the world wide open how we move there is everything there is nothing listen act we are wounded we are still’. The poems negotiate literal and metaphorical paths and trackways, and various encroachments on them: ageing, illness, sexuality, human destruction, war, technologies, death. But they are linked and restored via memory and then by words. A kind of perpetuity ensues. The poems are a series of lookings-back, the vantage points of which are depicted with brilliant clarity, as in the poem, “Tracks and Pathways”, where landscape is portrayed as body, “This old chalk track is not / entirely free / of blemishes. A slight track runs down / the length of its belly …” and is paralleled with schoolgirl sexual discoveries, ‘Your belly was once a path in snow.’ There are connections again between the literal landscape and the landscape of a relationship in “Chalk Paths”, a free verse sonnet where the collisions of mood and place are precise, painterly and understated, at the point on a walk where seams of chalk and flint coalesce, and where two lovers reach the apex of a meaningful conversation:

At first glance, the poems about the AI (Artificial Intelligence) may appear to be a swerve away from Home Farm towards the academic. Each sentence in ‘The AI conducts a Literature Search’, is footnoted, references being in the Notes at the end of the collection. For all the seeming randomness of the concept, the poem makes sense at this stage as a series of statements of what the poet has affected, ‘… I am an architect (7) of the / invisible, (8), although I cannot duplicate this act.’ Also, as an epistemological overview, ‘Give me the means for longing and despair, / for grace (14) for breath and breathlessness.’ AI is a remove from the human; the human tendency is to make meaning from that which is random. The poet fashions the randomly selected into a kind of sense. The Epilogue, three concluding poems in the book, each with a main title, “Listening to Fallujah”, draws on official reports and militaristic accounts, written in the language of deception and evasion, ‘We fired ‘shake and bake’ at the insurgents / using Willy Pete to flush them // and H.E. to take them out / of trench lines and spider holes.’ (“Listening to Fallujah 1: White Phosphorous and High Explosives”) The final couplet is detached, factual and harrowing:

Memory is piecemeal; a supremely gifted writer, Janet Sutherland, restores what would otherwise be forgotten in these distinctive nuanced poems where personal recollections and understandings of Home Farm are juxtaposed with instances where language, human behaviour and technologies are used to demolish any familiar concept of ‘home’.