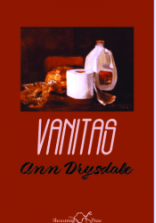 Ann Drysdale’s first five collections had a Beryl Cook picture on the cover, the sixth sported a pair of used garden boots and this, the seventh, has a still life by George Lucas showing a flagon of milk, a loaf and a loo- roll. The Cook influence is still with us in some poems – especially “Strictly Private” – a mop-dancer’s whacky dream of stardom, and although the work is laced with submerged literary references (which sometimes appear on the surface) you know you’re never going to be in for the daintiest of meals. She commands the ‘old ghosts’ who share her feast:

I’ve occasionally seen a more delicate manifesto but I’ve dined out on her work from the start, even back in the Peterloo days. She has been a journalist and a farmer, lived on a narrowboat, written memoirs and a guidebook of Newport and she grew up in London. It’s a big range and it’s pretty much all visible. She has both the refinement and the rough edge…

…coupled with the punch and timing of a stand-up comic. The poem goes on to express plainly the ‘overwhelming shock / of seeing what you see when you see me’ so that you’ll either struggle to imagine anyone getting her so wrong or decide that the friend’s gift was ironic. The collection certainly opens, and very nearly closes, with references to Keats. “Upon First looking into a Gideon Bible” is a splendid opener – a formal sonnet in the style of a riddle – and it’s fierce, thoughtful, direct and playful:

This bible is addressing all who ‘measure out your lives in rented rooms’ and the poet too. It is ‘a poor thing / with no desire to educate or please’ and whose final clue is ‘a sad paradigm / for shrinking distance and compressing time.’ If I didn’t already think she wasn’t much given to self-pity I might see here a teasing similarity of the Gideon with some books of poems, but thankfully not this one, which is shot through with a desire to please (though not at any cost). Near the end of the book, and in another Shakespearean sonnet, she plays with Keats – ‘the lucky youngster’ who never lived to lose it all to dementia (“When I Have Fears…”) – though I did wonder whether the ending takes a risk in sailing too close to the wind, and should say that that she mightn’t not:

There’s a witty anti-Lawrentian glance at a slow-worm in “Do I Feel Lucky”, in which she considers the possibility she might have been ‘a different poet’ or ‘a different woman with a different dog’:

Sheenagh Pugh has written of ‘the ever-present consciousness and possibility of humour’ being a staple of Drysdale’s work, and this seems entirely fair even in poems where humour is unlikely to feature. In this one the reader might be contemplating a benign version of Clint Eastwood’s ‘Dirty Harry’, as she considers ‘the arbitrary nature of salvation’. She had earlier been careful also to offer a startling visual and tactile account of the beast she decides to protect:

There is a further predictably relaxed look at whispers of mortality in the intermittent ‘Way to Go’ which surfaces four times throughout the collection. The first is called “Alabaster and Obsidian” on a childhood joy for ancient words which ends with a gung-ho assurance she’ll recover their shine:

Secondly comes “The Lyke Wake Talk”, a brilliant Drysdalian take on Hardy’s Afterwards; the third, “Edward”, finds the speaker with Charon aboard her boat, ‘legging our way through the echoing green-grown darkness of the final tunnel’. The fourth poem, “Carriage Return”, ends the book and is a conceit involving a Victorian funeral in which she speaks as the corpse or ghost leaving ‘my achievement, squashed into a lozenge / black-framed and draped, behind me on the wall’. She skips down from the bier to help steady the hand of a street urchin who runs behind gathering the ‘sudden dung’ left by the horses. Once again I’d have to say I’ve probably seen a more subtle crowning of a lifetime’s effort, but I’ve learned not to expect one here. Peter Finch calls her ‘a real upsetter’ in his encomium – which probably tells us that she means exactly what she says – even when you suspect she’s selling herself short. And it is strange that ‘real upsetters’ nearly always cheer you up, Ann Drysdale being no exception.