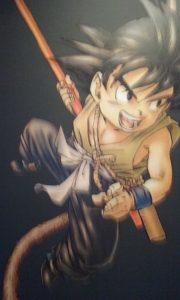 The Citi exhibition: Manga
The British Museum
Sainsbury Exhibitions Gallery
23 May – 26 August 2019
Pictures are tools with which to convey the essence, the spirit of things.’
Hanshû Sanji (1812)

Starting from Alice in Wonderland, re-told as Alice St Claire by Hoshino Yukinobu, the Citi Exhibition Manga at the British Museum invites the visitors to enter the rabbit hole of the fabulous manga imaginary world.  This is a world of visual storytelling that combines expressive pictures, strong plots and involving characters.  As a traditional visual art, manga has its precursors in hand-painted scrolls dating back to 12th century, which developed in 18th and 19th century until they became a successful business in 20th century.  Today its budget is billions of dollars involving 5,000 artists, plus publishers, editors, secretaries and accountants that work behind the scenes but contribute significantly to the success of the product.  The entire process of manga creation, as well as the most popular mangaka (manga artists) and characters, are thoroughly illustrated in the exhibition together with the contemporary development of manga into anime (animation).

Visual storytelling recorded in hand depicted scrolls is an important part of Japanese culture that connects to their writing practices, that is, to calligraphy and ideograms.  Painted scrolls with stories of animals and people with didactic and humorous intents were very popular. The most relevant examples are the Chõjõ jinbutsu giga (Frolicking Animals and People), a collection of scrolls of Kõzon-ji Temple in Kyoto, from 12th century, and Sarunõshi (Illustrated Tale of Monkeys, 1560-1570).  They show human-animal caricatures linked to the Japanese ideogram culture which implies a visual code similar to the emoji.  Later on, cheap comical books, which followed the same tradition, became popular throughout 17th and 18th centuries to convey stories and information to illiterate people.  Thanks to the development of woodblock print with new advanced techniques and the success of publishing culture during the Edo period (1603-1868), a great amount of illustrated books was published and sold at low prices to the general public. Education spread and poorer people borrowed books if they could not afford to buy them.

One of the most famous precursors of manga is the drawing manual Hokusai Manga by Katsushika Hokusai (1760-1849).  He started to publish it in 1814 as a one-off edition but it became so popular that he planned ten more volumes and ended with fifteen, working on them until his death.  Hokusai was a versatile artist comparable to Leonardo da Vinci and Picasso, though he was not considered an artist at the time but an artisan.  Artists or eshi were painters appointed by the Imperial family.  Hokusai was a producer of ukiyo-e, pictures depicting everyday life, that is, the uki-yo or ‘floating world’, the changing world we live in.  This concept entails both melancholy for the uncertainty and impermanence of life and rejoicing in living the present. He is also the author of Thirty-Six Views of Mount Fuji (which include The Great Wave of Kanagawa) and Tours of the Waterfalls.  The series were not painted from real life but they refined pictures made by previous masters and added scenes from everyday life.  They included portraits of the real world, such as plants, animals, insects and the changing of seasons.  Hokusai Manga comprehends 4,000 illustrations from peoples in Edo, today’s Tokyo, to animals, plants, weather conditions and fantastic animals from myths and folktales.  They are ‘whimsically drawn pictures’ (mazen to egaita ga), sometimes accurately depicted, other times realised with a few brushstrokes.  The sense of movement and humour are the main characteristics of this manual whose initial aim was to teach to Hokusai’s numerous apprentices how to draw properly.  It became so popular that it reached a large audience as a serialised book of drawings that depicted everything that was on earth, as was Hokusai’s ambition, and also entertained and made people laugh. Skilful sketching, keen observations and movement conveyed strong physical expressions which can be found in modern manga as well.

Hokusai’s work also reflects Japanese culture and style that encompasses tradition and modernity, humour and myth; it blurs the boundaries between ordinary life and the unpredictability of emotions and of spiritual or ghostly encounters where spirits and demons play an important part. As Hanshû Sanji claims in the foreword to Volume I, ‘Not only humans, with the full spectrum of emotions they express, but also mountains, rivers, grasses, and trees have their own innate characteristics.’  People are not presented as strong and beautiful as, for example, in classical or Renaissance art, but imperfect, flawed and funny.  They are having a bath or a fight, make faces, eat or dance in funny ways. Objects of the house, monsters, beasts and legendary figures and creatures are depicted too, revealing an all-embracing and limitless imagination as well as the ephemerality of the things portrayed.  This is also connected with the world of manga, with its continuous search of new approaches, new stories that engage the public, challenge and question genres and gender boundaries, mix low and high culture but never completely reject traditional values. In  this way, manga explores different sides of human nature through storytelling.

Significantly, Hokusai’s work spread the world reaching Europe and influencing the work of painters such as the Impressionists, Van Gogh and Klee through packaging for ceramics.  This denotes how low his work was considered by his contemporaries; it was like todays newspapers or comic books.  Japonisme became influential also thanks to Philipp Franz von Siebold (1796-1866) who brought Hokusai Manga to Europe.

The exhibition highlights different characteristics of manga such as the fluidity of gender roles in characters like Tora, the woman-warrior inspired by the figure of the historical samurai Uesugi Kenshin, or with the character of Hayeshi Akiko.  Other stories focus on how to become a manga artist, recover from emotional breakdown or life changing events, such as cancer, or deal with the aftermath of accidents.  Popular heroes such as Tomorrow’s Joe, an orphan who became a champion boxer, Dragon Ball who trains in martial arts and fights to save the earth, or Astro Boy (Mighty Atom), who will be one of the mascots of the Tokyo Olympic and Paralympics 2020, became internationally popular.  Other characters are specifically aimed to girls or young women, though manga tends to be read by all, such as Princess Jellyfish, a character obsessed by her pet jellyfish.

The word ‘manga’ was used for the first time by Imaizumi Ippyo in 1890 in a newspaper article translating the Italian word caricatura (exaggeration, caricature).  It was meant to satirise manners and customs as it occurred in Europe with the works of William Hogarth and Honoré Daumier.  The first manga bestseller was New Treasure Island (1947) by Tezuka Osamu that led to further developments involving anime, games and merchandise, and culminated in the boom of the 1980s and 1990s that reflected the Japanese economic prosperity.

Besides emphasising adventure, action, emotions and relationships, manga often deals with imperfections, weaknesses as well as strength, pushing boundaries, re-defining genres and genders.  ‘My brother’s husband’ and ‘What did you eat yesterday?’ are two series dedicated to gay relationships and the problems that follow when they come out in Japanese society.  Different themes are explored in manga, such as sport, sci-fi, love in all its forms, from romance, desire, sex and erotic, then horror, religions and history; they take inspiration from traditional stories and adapt or change them to the ‘manga style’.  This means both a strong emotional involvement, which normally reflects everyday life, and the engagement in an imaginary world. The result is great entertainment and fun as it happened in the caricatures depicted in scrolls and books of the previous centuries.  The stories they tell make people laugh, absorb them emotionally becoming very popular and selling millions of copies.

The exhibition also features interesting captions on how to read a manga, that is, from right to left and from top to bottom, and on how the symbols (mapu) and the sounds effects (onomatopoeias) emphasise the drama of the story and engage the reader.

At the end of the exhibition a compilation of Studio Ghibli films introduces the wonderful world of Hayao Miyazaki with video clips from Porco Rosso, Spirited Away, Howl’s Moving Castle, Whispers of the Heart, My Neighbor Totoro, and others.  Once more, the stories and the animations testify the immense creativity that produces such effective, emotionally involving and entertaining stories which inevitably grip to the attention of the viewer.  The films by Miyazaki are usually linked to historical events or everyday life and, at the same time, they escape into a world of imagination where spirits and nature break the boundaries with the human world.  This encompasses all aspects of cosmos, as Hokusai meant to do in his work.

This need for storytelling and imagining yourself as a different entity, in this case as a manga, is also present in Cosplay, the act of dressing up as a manga or anime character.  At the exhibition there is also the opportunity to take a picture of yourself and edit it in ‘manga style’.

The success of this exhibition is undoubtedly due to the richness and variety of the material on display, to the detailed captions and multiple examples of characters, genres and artwork, interactively engaging the viewer.  This emphasises well how manga gives voice to diverse identities that entail different ages, genders and styles.