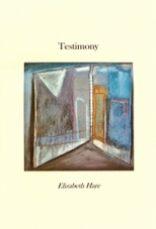 Testimony begins with a poem that honours the Quaker Peace Testimony of 1660. The plain, principled words of the Quaker declaration are interspersed with an image of Charles II,

What follows seems to take a lead from this confrontation, asking the reader to undergo a similar pause for thought, and to bear witness to contemporary testimonies. Most of the poems draw on Elizabeth Hare’s knowledge of ordinary lives she has encountered as a teacher and voluntary worker among homeless people and refugees, in London and elsewhere. Hare writes with great integrity, presenting what she has observed without making assumptions or trying to second-guess people’s motives; this allows the poems to hit home all the more powerfully. Trauma, abuse and the hard lessons of poverty are introduced with a few deft strokes of the pen. For instance, in ‘Surviving’ we learn:

Hare is sparing with metaphor, but often allows space for what is implicitly metaphorical. Researchers working on ancient pots at the museum are ‘mending all the broken stories’; a playground is ‘a wire cage on the roof/where children squawk and shriek’; the story of St George and the Dragon, told in a school assembly, captivates the children as they imagine vanquishing their own dragons:

As a drama teacher, she understands the way in which theatre can help children to find expression and, perhaps, solace. Several of the poems take issue with the misunderstanding that ‘You can’t do Shakespeare with these kids,’ and in fact she herself is best able to articulate her compassion for one of her young actors, ‘poor acne’d Caliban’, through Shakespeare’s words:

In most of the poems, there is a watchful ‘I’, observing, trying to find ways to offer help, sensitive to the gulf between those of us who have ample security and those who have very little. In ‘Lunchtime stories’, the narrator describes helping a refugee to collect a prescription. He knows little about how to go about such a simple task in a foreign country – and she for her part has everything to learn about the ways in which he has struggled to survive:

There is irony here, as well as rightful anger and clear-sighted contempt for injustice. In ‘The Jargon’, she ridicules the cold official language that delineates the limits of ‘welfare’:

I was intrigued by ‘Bamburgh beach.’ An unrhymed villanelle, this haunting poem makes great use of the form to suggest a a lost history, a place inhabited by repetitions of the past. I’m not sure what the connection is, but with its mysterious figures ‘always out there on the shining flat horizon’, it made me think of the cockle pickers drowned in Morecambe Bay in 2004. The sense of yearning and loss is very moving and although it seems to be set in a different place and time to most of the other poems, tonally it is entirely in accord. In one poem after another, Hare portrays a particular kind of disconnect: the uneasy relationship between those in our society who are fortunate and those who, one way or another, slip through the safety nets or are actively discriminated against. She conveys the painful awareness that while she can testify, she and the people she tries to help remain ‘light years apart’.

And yet this is not a depressing collection – far from it. I think that is because Hare writes with such quiet and steadfast passion. Like the Quakers in the opening poem, she holds out the possibility of denying ‘bloody principles and practices’. She takes a stand, as they do, insisting that this is possible, ’To do what tends to the peace of all.’

The final poem ends on a possibly apocalyptic note:

But it is full of images of peace and simplicity:

The insanities that ‘reach us from a neighbour’s radio’ will not just disappear, but there are values and in those there is hope: