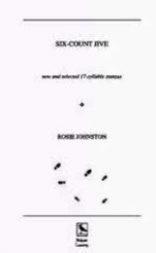 Subtitled new and selected 17-syllable stanzas, Rosie Johnston’s new collection contains 30 short poems (a total of 91 stanzas with two more prefacing the sequence), which in her own words, ‘describe what it is like to recover from PTSD’. Post-traumatic stress disorder is something we mostly associate with war, as is acknowledged in:

But the ‘veteran’ in this case is sitting in court, where:

The 17-syllable form is one Johnston has made very much her own, having used it in her three previous books of poetry: Sweet Seventeens (2010); Orion (2012); and Bittersweet Seventeens (2014). The poems don’t qualify as haikus (and aren’t meant to) not only because technically they don’t follow the five-seven-five syllable form or include the required seasonal reference, but also because the stanzas in Six-Count Jive don’t aim for the completeness — the Zen-like oneness, however elliptical — that haikus strive to attain. Rather, they are fragments or shards, pieces of a shattered life that somehow must be fitted back together. Paradoxically, grouping the stanzas in threes only serves to emphasise this disconnectedness.

It’s striking how often words expressing disintegration appear: ‘Spills tears like a glass knocked to the floor’, ‘A problem shared is a problem / shattered’, ‘She is broken down small. No one / can splice / her slivers again but her’, ‘words blow adrift’, ‘Can she reassemble her thought? / Achieve / Smooth mosaic paths of sense?’, ‘Words shatter into mute groans’, ‘smiles fracturing’, ‘sharing various brokennesses’.

You can easily hurt yourself on shards and the poems can be painful to read:

Although deeply personal, these are not the spontaneous outpourings of ‘confessional’ poetry, but tightly-controlled poems, which — as Johnston acknowledges — ‘have come together over nine to ten years.’ As the new and selected suggests, several of the stanzas are, in fact, drawn from her previous collections, sometimes unchanged, but often subtly amended and/or placed differently within the sequence. Almost all come from Sweet Seventeens and Bittersweet Seventeens, which both tell the same story as Six-Count Jive, but in very different ways. Reading them together, you can see how they plot the poet’s move towards a better understanding of the abuse she suffered, which in itself is testimony to the honesty of her writing at the time.

In Sweet Seventeens, Johnston accepted violence as a necessary part of love (‘Love’s a fussy succulent: / It needs / Tears and sunny smiles to flourish’) and the relationship it presents can only be described as sado-masochistic (‘“Enough?” taunts Aphrodite / Piling weights / Upon my heart. “More,” I sigh’). Compared with Six-Count Jive, the recovery from her divorce here sounds unconvincing (‘Her bridal veil suspends a / Hunter’s net / Around you, and I walk free’), as though she is putting a brave face on things. ‘Sing with me and write and laugh / and run — / Fuck misery, let’s go dancing,’ is how it ends.

As a narrative, Bittersweet Seventeens is more obscure (‘Immediate responses to the text should take precedence and over-analysis set aside,’ advises a note on the sequence). It appears to deal with various aspects of her new life: an affair, as in Orion; the death of her father; her children growing up; memories of her own childhood; and most significantly — as in Six-Count Jive — reconnecting with the world through nature. But she is still struggling with the effects of her abuse and the emphasis here is on survival: ‘Another happy day. Let’s bless / Each second’s / Golden gift: survival.’

The quotation marks serve to distance the poet from the sentiment — a regression like this would be an illusory escape. The jive is a dance in which the woman — or girl — appears to be flung around by her partner. It belongs to an era when men were in control. And ‘to jive’ also means ‘to mislead’ or ‘to deceive’.

The real healing takes place through the difficult process of recovery described in the sequence. What is most striking about the poems is the sheer physicality of the imagery which Johnston uses to evoke mental states:

She also invests her compressed form with a wide range of tone from the softness of:

to violence on the scale of Hopkins at his most tortured:

There is wit in these poems, too, for instance in:

where ‘down’ has a double meaning.

It would be surprising if a sequence developed over such a long period were not carefully organised. It may be too fanciful to suggest that, like the jive, Johnston progresses to recovery through a series of six steps, moving from the divorce itself, to a period of turning inward, then out onto the seashore where she has found solitude and from there to the writing of poems, finally reconnecting with the world first through nature (especially flying creatures: birds or insects), then images of food. Nevertheless, the poems are organised thematically in a way that holds them together, when they could so easily have fallen apart.

And what better way to express openness to the world than through images of food? The poem moves on to seek closure by reprising in the third stanza, with minor variations, the first stanza of her first book, Sweet Seventeens, so that:

The last word moving into a fourth stanza — a new departure in the sequence, suggesting growth, as she lifts the latch to let in the world again.

Six-Count Jive is a brave and honest book, one which I hope will not only be enjoyed as poetry, but also give encouragement to women recovering from similar experiences. Rosie Johnston dedicates it to everyone with PTSD, ‘especially those of us traumatised in our own homes.’