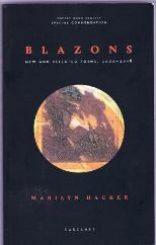 George Szirtes has described Marilyn Hacker as “American, lesbian, feminist, Jewish, and voluntarily displaced to France,” to which I add, political activist and Arabist. Blazons follows her thirteen previous collections of poetry and she has sixteen more books translating French, Francophone and Arab poets. And (inshallah) not done yet.

I reviewed an earlier collection of Hacker’s poetry, A Stranger’s Mirror: New and Selected Poems 1994-2014 for London Grip in 2015 (https://londongrip.co.uk/2015/02/london-grip-poetry-review-hacker), and it is again a pleasure and privilege to read, catch up on, and comment on her newest ‘New and Selected’. (Disclosure: Marilyn is a friend and mentor.) In the earlier review I celebrated her skill in the art of formal poetry:

Except for the limerick, the use of these forms in English poetry all derive from other languages, but who writes in them these days? Modern poetry, wrote the late Tony Hoagland, is one of indeterminacy of language leading to irony and circumlocution — a broken connection between language and things. “Form today,” he said, “is about exploring representation itself, not that which is represented.” Our new Poet Laureate Simon Armitage, in his Oxford Professor of Poetry lecture, rejected that self-referential freeform: “[T]he effects of structure, no matter how covert, are always involving and engaging at both the aural and visual levels…” ( A recording of this lecture can be found by visiting https://podcasts.ox.ac.uk/undisfigured-false-or-vicious-ornaments-clarity-and-obscurity-age-formlessness  and the University of Oxford announcement of the lecture is available at:
https://www.english.ox.ac.uk/event/professor-of-poetry-lecture-undisfigured-by-false-or-vicious-ornaments-clarity-and-obscurity-i )

Poems needn’t be in a classic form, but their shape on the page must reveal something about, and be congruent with, the content. Sound is also critical to form: internal echoes, alliteration, repetition. Metaphor and judicious use of white space also achieve what Armitage calls ‘ritual and ceremony’. Let us call the deliberate use of shape and sound ‘formality.’ You recognize ‘informality’ in poems by the absence of rhyme and meter, with arbitrary line breaks and stanzas shaped oddly for no obvious structural reason; what my teacher Frank Bidart calls, “chopped up prose.” They may still please by what they say, of course, narratives ‘about’ as in “this poem’s about” – a kind of poetic selfie.

Sometimes a skilled poet will write a poem in a slyly disguised or nonce form. Look up Jehanne Dubrow’s wonderful ‘The Long Deployment’, which she calls an ‘exploded villanelle’, to see what I mean: https://poets.org/poem/long-deployment. The sestina can be presented in tercets, and consider the many ways the sonnet can be presented and not always in fourteen lines. (As Carol Ann Duffy put it, “The sonnet will always be the little black dress of poetry.”) White space on the page, used strategically, is itself a form of form.

Formal poetry’s apparent demise was mourned by Clive James, “By now the game has irreversibly lost its net: you have to pretend the net is still there”, glossing on Robert Frost’s comment that free verse was like playing tennis without a net. Is it possible that Marilyn is one of the last of her kind, a poet in the tradition of poets whose work we revere (among others, Duffy, Auden, Frost, Bishop, Larkin, Donaghy) but fail to honour?

Marilyn Hacker’s poems are unselfconsciously ‘about’ poems. About what she encounters in her walks about Paris. About friends she meets, or elegizes; about meals and memories. These poems employ varied formal structures, but so subtly one almost forgets they are in classic forms, the art disguising the art, where one is barely conscious of an underlying beat, strains of music that carry the narratives along like petals floating down a quiet stream. Her accounts are invariably generous, inviting the reader in as a participant, which, I maintain, is because of the formality, which entrains our emotions like a melody.

Among the new poems in this collection are ten Roman-numbered ‘Calligraphies’ interspersed between other new poems so that each new poem comes as a dear surprise. They are in the Japanese renga form, sets of stanzas, each set arranged in two pairs: the first stanza in each pair is a call in three lines of 5/7/5 syllables (the origin of the haiku), the second stanza a response in two lines, 7/7 syllables. The last line of the second pair is chained by a word or image to the following set. The renga was a sociable enterprise: a group of poets sitting on tatami mats, drinking sake, improvising the calls and responses, and enjoying themselves hugely. In Calligraphies, Hacker is her own cluster of poets!

There are nine to thirteen chains in the ten Calligraphies. An example is the set VII dedicated to Fadwa Suleiman, a Syrian activist who escaped the carnage in her country only to die of cancer in Paris. Here is the opening:

When Hacker tells her stories and experiences, they are always generous, with substance and feeling that we are invited in to share. W.H. Auden once explained the way he approached a poem: “[T]he questions which interest me most when reading a poem are two. The first is technical: ‘Here is a verbal contraption. How does it work?’” The second, according to Auden, is, in the broadest sense, moral: “What kind of [poet] inhabits this poem?” Marilyn offers up her version of Auden’s judgment in a perfectly-formed (what else?) ghazal: