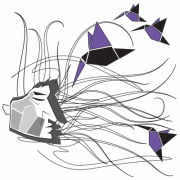 Chilean singer-songwriter, poet, cult figure Violeta Parra’s most famous work “Gracias a la vida” can be viewed as an outpouring of gratitude – or as a suicide note.

In a 45-minute tribute to the artist who revived and reinvented Chilean folk music and inspired adoration, playwright Constanza Hola destroys any impression that Parra could possibly have sung because she was happy or for mere self-expression.

Parra, portrayed with passion by Fran Olivares, tells us she sings as her mother had sewed: out of duty and for others; she gives voice to the feelings of those who have no voice, or even of an entire nation.  She was for Chile what Piaf was for France.

Directed by Diego Poupin, who also provides guitar accompaniment, Olivares’ Parra plunges to depths in which her head is a cacophony of noise and soars to states so happy she is “faster than a train”, demanding of members of the audience whether they have ever felt the same.

In the face of the chaos of Parra’s mental state, Hola’s play is a simple but effective depiction of the essential facts of the musician’s life.

We learn she had a brother who was a poet, a child who died, she toured the extreme length of her country to study and collect folk songs, became the first Latin American to be exhibited individually at the Paris Louvre and was driven at least as much by rage as by love.

On the evening I saw the play, the mood was intense and the elements of humour didn’t break that atmosphere as the Chileans in the audience and the Chilean artists, who have produced the work, paid homage to a figure who in reviving folk art became part of Chilean folklore herself.

For the non-Chileans, it’s an initiation for which they will be straightforwardly grateful.