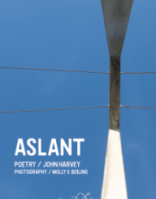 As I begin to write this review it strikes me that one’s reading of a book can initially be influenced by what one had previously been reading. I came to this collection having just enjoyed another book that  robustly and self-confidently expressed irreverent and sceptical attitudes that I broadly agreed with. Aslant, by contrast, is a much more provisional, reflective and tender work and represented a refreshing change of tone that I hadn’t known I was more than ready for.

Aslant places John Harvey’s poems alongside evocative photographs by Molly Boiling which provide sharp-edged images of steps, shadows, girders and corners of high buildings. These pictures often suggest entrances and exits or incidental glimpses alongside the telling of a story. Hence they combine well with Harvey’s poems which usually have a strong narrative and reminiscent thread.

Molly Boiling is in fact John Harvey’s daughter and the satisfying coherence of words and images is enhanced by the fact that she sometimes appears within the poems. The opening poem ‘Curve’ places itself in time by stating “Our daughter is in Paris, / dreaming of becoming seventeen” which is the perfect curtain raiser to a delicate memory of a moment somewhat more than seventeen years previously:

That it would have been is such a cleverly subtle construction suggesting that memory is not cut-and-dried but can expand and come back to life more fully as it is revisited.

Harvey’s recollections and reflections on the past do not only depend on what he remembers but allow for the uninvited intrusion of ghosts “like the time my friend Sue looked up / and saw her father in the audience, / clear as day, as she was listening to Mahler 9.” Clearly Harvey is willing to borrow other people’s ghost stories and he also tells of his mother sometimes seeing her late husband “at the end of the bed when she awoke,/ the old sports coat, the one he counted second best, / in need still of needle and thread”. (That seemingly redundant extra information about the jacket is a typical Harvey touch for lending authenticity.) But second-hand stories sometimes give place to the speculatively personal when he goes on to wonder if one day

If a sense of mortality seems to hover over much of this collection then ‘Epitaph’ suggests a reason.

One of Harvey’s tactics for dealing with difficult situations is to draw encouragement from historical instances of mishaps that turned out unexpectedly well. For instance he tells the story of the thriving township of Bailey’s Mistake which was established when a ship carrying a load of lumber inadvertently ran aground and its captain decided to pretend he had always been intending to make landfall there and ordered the unloading of the timber to build an accidental settlement.

Harvey’s most frequent role models for coping with adversity are jazz musicians – as when he recalls “the jauntiness of Mississippi John Hurt’s guitar,/ offsetting the finality of his words.” Jazz figures prominently in the middle sections of the book and ‘I Remember’ is essentially the poet’s own autobiography expressed as playlist that spans several decades. It concludes, philosophically

Musical memoir is followed by eye-witness accounts of outstanding jazz performers. We hear Thelonious Monk “striking two / notes at once, seeking out the spaces in between” and later launching into a solo

When Art Pepper plays at The Village Vanguard the reed of his instrument is “like burnt rubber / in his mouth, notes catch fire, / burn and scatter /like cinders underfoot.” And it is during his stint with the Basie band that Lester Young discovers himself in

This is wonderfully evocative writing which, I would maintain, conveys something authentic even to a reader who is not a jazz aficianado.

The final pages of the book return to personal and reflective mood and a recurring sense of wistful consolation after loss. Atmospheric glimpses such as:

remind us that the poet John Harvey has another life as a prolific writer of fiction – and by now he knows very well how to set a scene we can visualise and sketch a character we can recognise.

Since there are a dozen or so pages of photographs, Aslant only contains twenty-odd pages of poetry which might lead some to wonder whether this is a chapbook offered for the price of a full collection. But this is no ordinary book: the well-chosen images and the way they complement some consistently satisfying high-quality poems make it, in my view, well worth a tenner of anybody’s money.