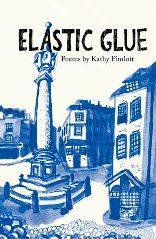 This is the second pamphlet from Kathy Pimlott. Her first, Goose Fair Night, celebrated people and places in her home town, Nottingham. Again, the poet is concerned with place and community. In part it’s a love song to London’s Covent Garden and to the lives that inhabited the area historically as well as those who still live there – like Pimlott herself – ‘in infill blocks…’

But Pimlott does have memories since she has retained a tenancy near Seven Dials for three decades, against the odds and in spite of the plans of developers who have turned this historic part of London into a shopping and eating destination, “… so smart/even the rats keep a low profile.”

At Seven Dials, seven roads radiate out in a star shape. The area has a long, colourful history. In the early 19thC it became notorious as a rookery, a place where criminals and other undesirables gravitated. In ‘Seven Dials: The Rookery Redux’ Pimlott evokes some of the more undesirable aspects of this area today: blocked drains caused by, “fatbergs from the eateries;” “the suck and growl of traffic’s heat” and “the crack mob.” Residents roused from their sleep vow to move to “somewhere normal” as outside:

With the line in italics – clearly a quote from an historical account of the area – neatly spliced into the poem, Pimlott shows her knowledge of place and deft skill as she fuses past and present.

It’s with a skilful use of traditional form in, ‘The Ballad of St Giles Central,’ that Pimlott creates an apt serio-comic tone for her critique of Renzo Piano’s primary coloured tower blocks, built to the north of Seven Dials at St Giles.

In ‘Going to the Algerian Coffee Store: 500g Esotico,’ free verse couplets and long, meandering lines (so long they are printed vertically up the page) are well-suited to “beautifully modulated warnings,’’ as we follow poet as flâneuse,

The other place/community that features here is an allotment. Since Covent Garden’s garden is long gone, fruit, veg and flowers are grown further out of town. “Taxonomy,” reveals in five verses with a deft rhyme scheme – the serio-comic again – the pecking order in play, “The Architects and Lecturers …/make successful funding bids for loos;” “… former Military … won’t be told/what to do,” and “The Hippy does exactly as he pleases…” It’s left to “Capable Women” to make the tea, keep the TCP to hand and become Hon. Sec. All are united around a dislike of slugs and a liking for cake.

Kathy Pimlott’s voice is bold, a breath of fresh air, a talent which the poet has long nurtured. In ‘Music & Movement,’ recalling a class from childhood, we learn that the girls are trees and boys are the wind, but “… my legs are mighty. No callow gusts/will better me.” And “when I get to be wind, I’ll do it properly.” This seemingly simple poem acts as a keynote for the project here – resistance and celebration. Pimlott blows away at the surface of things, revealing people, places and histories often unseen, forgotten or undervalued.

In case you are wondering about the eye-catching title, Elastic Glue, it emerges quite subtly towards the end of the pamphlet in the poem, ‘The ironmonger’s a vintage clothes shop now’. I recommend you read this sharp-eyed pamphlet to find the reference. Elastic Glue is a distinctive mix of probing and playfulness, a joy to read.

Pamela Johnson is novelist & poet.
Her third novel, Taking In Water, (Blue Door Press, 2016, https://bluedoorpress.co.uk/books/book-1/) was supported by an Arts Council Writers’ Award. Her poems appear in many magazines, anthologies and were exhibited in Tidelines at Poetry In Aldeburgh, 2017.