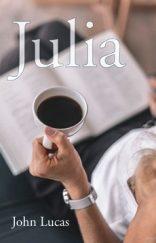 Stuart Henson reviews a new novel by John Lucas which, intriguingly, hinges on some lines from a poem…

The novel, that bright book of life—as Lawrence would have it—is more than an amusement. It has things to tell us about living, about the true relations of men and women. John Lucas employs a lighter touch than his illustrious predecessor, but in his new novel, Julia, he too is concerned with what draws men and women together, and what may sunder them. Its philosophy hinges on five lines from the poem XXX by Michael Murphy, in which the speaker (he’s talking to Catullus) agrees that… ‘Though reason proves / Love deceives at every turn, hands back the ring, breaks every vow, / Still our actions are impelled by it. It’s all we own.’

The eponymous Julia is well placed to cope with literary ambiguity since she’s a lecturer in English at an FE College somewhere in that region of Leicester-Loughborough-Nottingham academe that could well be dubbed ‘Lucashire’, and though Julia’s version replaces ‘impelled’ with ‘compelled’, the quotation provides her with the all-too-ready confirmation that the love she has taken for granted with her long-time husband Martin is subject to the same laws and stresses that have bedevilled marriage since Catullus’s time.

It all starts, a little inauspiciously, with the protagonists, a group of ex-college friends now holidaying habitually on a Greek Island, drinking and eating at a seaside Taverna in celebration of their impending return to the drudgery of lecturing. We’re introduced to the odiously self-centred Giles Poynter and his truculent son Orlando, and to the decent but footloose James and his latest, apparently secretarial, attachment, Trudy. So far so David Lodge, but when Julia and Martin return to England and Martin sets off for San Francisco to give a British Council lecture, the novel takes a more serious turn. Fate has decreed that Julia will light upon a note that Martin has kept, a fragment written in desperation by a former student on the evening before she took her own life. The cryptic message, imploring Martin’s help, seems to implicate him in the girl’s unhappy plight. Until now the incident has been buried under the comfortable memories of their marriage—the raising of their daughter, Polly, and the growing respect Martin has garnered through his work, but Julia is riven suddenly, at the age of fifty, by doubts.

While Martin’s away, Julia asserts her self-hood, journeying to Brighton before term starts, meeting with Orlando and confiding in Trudy, who turns out to be a staunch and relatively trustworthy companion. This is where the novel gets into its stride, offering us a convincing portrait of a lady of a certain age who’s drifting into uncharted territory, fearing isolation but determined to assert her psychological and sexual independence. What Lucas is good at is, as the blurb says, filling in those little details that give a story credibility. Occasionally it’s a virtue that shades towards the vice of too-much-information (meals are a speciality: breakfasts with watery eggs, lunches with real and ersatz retsinas) but as the action gains pace the mystery of Martin’s past impels the reader in genuine ‘page-turning’ style towards the anticipated confrontation.

The novel’s climax, you feel, is not going to be one of simple truth and reconciliation, and Lucas uses some crafty devices to delay and divert us along the way. The greater part of the narrative is told chronologically in the third person, but links are sometimes withheld at the end of chapters—to be filled in later—and Julia’s attempts to clarify her situation through her experiment with a journal allow us a more subjective view of her thinking. The confidences she shares with Trudy begin to define her new self-image, but it’s the well-meant assertion ‘It’s a privilege to meet you Mrs Gibbs.’ from a new colleague that finally tips her into outright rebellion:

It’s perhaps telling that even in her triumph of feminist contempt she describes herself using her married name. The course of separation never did run smooth, not least for a true and faithful spouse of Julia’s age. It’s to John Lucas’s credit that he’s able to navigate the presentation of Julia’s putative forays into infidelity with considerable tact. Her eventual night with Rayburn is, mercifully, only revealed in passing in the denouement, and that with a rather touching gentleness.

In the end, despite its seriousness of intent, Julia, is also a humorous book. The decline of higher education into a craven corporate desire to woo and satisfy its ‘clients’ provides the focus for some wry satire. From her lumpen students to the toad-like College Secretary, Rudkin, Julia’s world of work is populated by a cast of all-too-recognisable minor characters. Organisation-speak, self-promotion, world-weary cynicism… the arrows hit their mark. And Lucas takes a Puckish pleasure in scattering little references for us to pick up if we will—in Julia’s reflections on the early days of her marriage, for example: ‘How simple love had been, and how complete, making one little room an everywhere.’ and in the moments before Martin’s return: ‘Should she have brought flowers to put in the hearth? Chrysanthemums? The odour of chrysanthemums. The odour of death.’ My favourite among these occurs as she glances round her empty home remembering ‘when and where most of the articles were bought, and why: sometimes on a whim, sometimes because one of us fell in love with them, or to keep fresh the memory of a place or an event where we were happy, the pictures and the cutlery, the tinkling piano in the next apartment. The music in the piano stool. That vase…’ Not that it’s all lit. crit. Delightfully, at the party for the re-naming of her gay colleagues’ boat, the Auntie Agnes, we discover the band playing at The Fisherman’s Rest is none other than The Terry Marsden Quartet—Minus Terry Marsden. For that one you have to have read Lucas’s 2016 novel The Plotting. I’d recommend it.

Julia’s loneliness is exacerbated by the impending departure of Polly for two years in New York with boyfriend, Al. Her recollections of the touch, the intimacy, of child-rearing become all the more poignant as she stares into the darkening mirror of middle-age. More than a few readers will identify, no doubt, with her empty nest and empty heart. Nevertheless, it’s the anticipated cliff-edge of the face-out with Martin that draws you on. Maybe he’s just been covering for the sins of Giles Poynter? Surely it’s not all a terrible mistake that will resolve happily? No spoilers I’m afraid. Suffice it to say that John Lucas is not in the business of easy solutions. Love is all we own, says the poet, but it deceives at every turn.