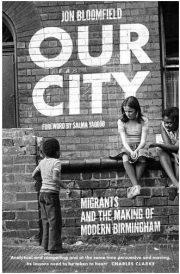 “Our City: Migrants and the Making of Modern Birmingham” by Jon Bloomfield.

Although Jon Bloomfield intended “Our City” for a general audience, I think some of our elected representatives could learn a lot from it.  Unfortunately, “Our City” isn’t likely to appeal to the kind of populist politician who tapped into a nasty streak of racism in the British population to persuade 51.9% of them to vote for leaving Europe in the 2016 referendum.  Nor will it attract the attention of anyone who is only prepared to discuss migration in strictly polarised terms.  For everyone else, Bloomfield provides a balanced report on life today for Birmingham’s first- and second-generation migrants and their impact on the city they live in.

For those of us of a certain age, Birmingham will always be linked with Enoch Powell’s Rivers of Blood speech given at the Conservative Political Centre in 1968.  His speech coincided with an upsurge in support for right wing extremism driven by the National Front, which lasted well into the 1970’s.

The city has been home to Bloomfield for more than forty years and he has worked in various departments of Birmingham City Council, where he also headed its European and International Division at one point, so he isn’t just a detached observer.

That said, “Our City” combines solid research with substantial statistical data, which is brought to life by the material he gathered from forty-six interviews with people, who talked to him about their experiences of life and work in the city.

The group he interviewed come from a wide variety of ethnic backgrounds.  Twenty-five have their origins in Pakistan and India, while the rest have their roots in Africa, The West Indies, Europe and China.  They talk with Bloomfield about employment, health care, education, city politics, racism, religion, relationships and social mobility.  They are largely positive about life in Birmingham and the way they’ve been able to settle and adjust without losing their cultural identity.  A number of interviewees show a real sense of pride in their ability to contribute and make a difference to the city they now call home.

“Our City” is enlivened by vignettes drawn from his time as a public servant and Bloomfield’s family background mirrors some of the experiences of the people he is writing about, which surely adds a further dimension to his understanding of their lives.

His grandparents fled from Poland to the East End of London in the wake of the Pogroms unleashed on Jewish people after the assassination of Czar Alexander III.  He has followed the well-known migrant path to a better life, pushed along by parental aspiration and hard work during a period filled with opportunities for a sound education and prospects of gaining employment in a worthwhile job.

Bloomfield doesn’t avoid contentious issues and quickly dispatches the well-worn assertion that Eastern Europeans came here with the sole intention of signing on for benefits in Chapter 6 “Doing the Work that Nobody Else Wants to Do”.  It was, in fact, Tony Blair’s endorsement of the individual’s right to opt out the European Work Time Directive in 1998, which brought them here, attracted by the chance to work unrestricted hours for wages, which compared favourably with what they could earn at home.

He is clear that the kind of “live and let live thinking” which turns a blind eye to “illiberal practices under the guise of cultural liberalism” (p.175) is at the heart of a number of the city’s problems.  He doesn’t have much time for politicians who have consistently refused to address conflict between those who seek to impose their religious beliefs on others and those who operate within the secular tradition, on the grounds that any challenge to the faith of a particular ethnic group amounts to discrimination against the group itself, and believe they should just be left to get on with it.

This supine attitude is particularly problematic in a city where 21.8% of the population follows the Muslim faith and ignores the widespread influence of Imams, trained in Saudi Arabia, who are on a mission to spread Sharia law wherever they go in the world, backed by the bottomless wealth of the ruling Wahhabi Nationalists.  It has also fostered the growth of monocultural interest groups within the city’s political system and the cronyism that goes with it.

In a climate where nuanced debate about migration has become almost impossible, Bloomfield acknowledges that is usually the worst-off who experience the sharp end of poorly regulated migration, with the strains it places on housing, education and other services, and is prepared to consider managing numbers of migrants to this country.

If you feel offended by this idea and disinclined to read “Our City”, I’d like to point you to the last chapter “Creating the Open City”, where he states:

“Twenty-first Century European cities are multi-ethnic and they will continue to be so.  There is no going back to the 1950’s” (p.229).

He reminds the “they come over here and…” contingent that it was the British Government who actively encouraged migration from India, The West Indies and Ireland to fill staff shortages as the welfare state grew and grew after the Second World War.

Migrants have transformed Birmingham’s cultural landscape, especially the music and food scenes.  At the same time, the people who arrived in search of a better life seem to have found it, as Bloomfield’s interviewees attest.  They have also come to appreciate the availability of free education and health care together with the freedom of expression they enjoy in the city.

Despite a generally optimistic view of migration and Birmingham’s future, Bloomfield warns politicians, policy makers and all Brummies of the dangers of closing off the city to the outside world.  When much of the city’s recent success has depended on investment by European companies, Brexit could have dire consequences for the most disenfranchised members of its migrant communities.  A decline in the economy and increased unemployment would hit them hardest, and put the dream shared by generations of migrants everywhere even further out of their reach.