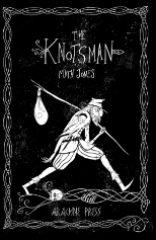 The Knotsman is a collection of poems about a fictional folklore character from the 17th century, with an inherited knowledge of how to untie various knots. These might be actual knots, knots that bind two people in marriage or the threads that tie people to life. It follows a narrative arc through myths about Knotsmen, the apprentice, the jobs they have taken, the itinerant nature of being a knotsman and the mastery of skills. The title poem explains the craft,

The poem ends with the witness poet’s concerns,

This is also a convenient explanation as to why no records exist of knotsmen. That doesn’t stop speculation as to “The First Knotsman?”

The colloquialisms and phonetic spelling aid the sense that this is written in the style of a historical record. The suggestion that the knotsman is a descendant of women tested for witchcraft implies his craft is unwelcome and that he exists as an outsider, perhaps only revealing himself to those who understand his role. “The Weaver Wife” further cements his image as an itinerant as it suggests she traps him in a loom and becomes pregnant,

“The Betrothal Rope”, a prose poem, also explores the ties of marriage where Miss J thinks she’s lost her betrothal rope and fears her husband, William, called away to war, will cheat. She is not calmed when the rope is found but instead throws it at the Knotsman,

The Knotsman gifts both participants: William will survive war and Miss J will no longer nag him about her fears that he will be unfaithful. In a later poem, “The Poetess”, the Knotsman refuses to unknot a poem,

By gathering these poems as a collection rather than a straightforward narrative arc, Math Jones gives himself space to create different voices: the apprentice who is also narrator; children’s rhymes telling tales of The Knotsman; and The Knotsman’s attempts to understand his own roots by means of stories about people he has been able to help. In one instance we learn of an imposter who was able to unknot threads but failed to understand the limits of his talent and how it could not be used in jealousy or in judgment. This is a collection that can be read both in one sitting or dipped into at leisure because the poems do not need to be read in order. Through The Knotsman Math Jones has created an intriguing character and his stories have a timeless feel: they could read as straightforward historical narrative or as a metaphor for more contemporary anxieties.

Women body and image, between symbol and revolution. Review by Carla Scarano. Julia