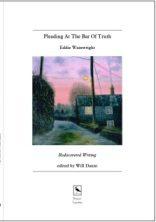 Pleading at the Bar of Truth

I first came across the name of Eddie Wainwright in the mid-1960s when I arrived at Nottingham as a young lecturer in the University’s English department. The academic staff of Nottingham’s English department at that time tended to wear suits and ties, work steadily through two (sometimes three) course meals in the middle of the day, and such conversation as there was centred on cars, lawns, and mortgages. Discussion of literature, especially poetry, was reserved for teaching hours. I remember asking if there were any writers in the city – Alan Sillitoe had already gone south – and being given the name of someone called Eddie Wainwright. He was said to write poetry, though the way the name was pronounced by the man who gave it me indicated that Wainwright was almost certainly a dodgy customer. I mean, a poet. He probably didn’t pay his bills.

For some reason I can’t now remember, Wainwright and I didn’t then manage to make contact, but later I began to see his name in a number of magazines, where it was attached to poems and reviews of contemporary poetry. Later still, when I was asked to compile an anthology of Nottingham-based poets, The Nottingham Collection (Five Leaves Publications, 2005), I wrote to Eddie and asked him to send me some poems for consideration. He obliged, and from the sheaf which arrived I chose two – ‘Bearding the Bard’ and ‘King of the Beasts.’ I probably took the latter because it’s set at Wollaton Hall, a Jacobethan grand house on the edge of Nottingham; though it helps that the poem is a rawly comic account of a young man who takes a girl to see the Hall’s stuffed gorilla, with its ‘mighty prick and balls the size of three.’ As for ‘Bearding the Bard,’ it’s a rambunctious, funny, well-written, and recognisably spikey-take-no-prisoners monologue, the speaker a disillusioned, hard-boiled worker who, at the end of a hard day’s work, wants to get stuck into ‘dinosaur stew … and mead,’ and does not want to be made to listen to an evening-class tutor, some ‘idiot/who seemed to have been at the Capstan Full Strength for decades/clearing his pipes before boring on.’ The poem ends: ‘I’m no great reader,/but give me a book any day. At least you can shut it up!’

I’m slightly surprised that neither poem makes it into Pleading at the Bar of Truth, but reading through the poems that are included – chosen without editorial interference by a group of poet/critic friends of Eddie’s whose brief was to make their own, personal selections – I can see that, as with the poems I chose, they are, as Roger Elkin says, by turns ‘ironic, witty, angry and passionate,’ though I myself would add to this list what feels to me the authentic Wainwright vocabulary of demotic utterance, which both the poems in The Nottingham Collection have in spades. Eddie was a good observer, and an even better listener. When the Collection was launched in the improbably grand surroundings of Nottingham’s Council House – ‘it looks like the state capitol of some minor Balkan Nation’ the Australian poet, John Forbes, once commented to me – Eddie was among the guests. He had come from his home on the Isle of Wight, but not having been told he would be present, I’d made no provision for him to read, so that when he introduced himself I was both delighted and apologetic. ‘No need,’ he said, ‘I’m happy to listen.’ As a result, the packed chamber missed out on ‘Bearding the Bard,’ which I’m willing to bet would, as the saying goes, have brought the house down.

Eddie the critic cut many a reputation down to size. Though I haven’t seen the collection of his pieces gathered together as Poetry in our Time, (Lapwing, 2008), I will have read a good many of the reviews and longer articles that went into it and which first appeared in Envoi, where he regularly featured under Elkin’s editorship. I didn’t always share his preferences and dislikes, but he was always worth reading. He had the great merit of arguing a case rather than making bald assertions and he invariably quoted to good effect. And I was certainly of a mind with him in despising the blatherings of well-regarded poets for whom manner always counted for more than matter. I was grateful, if not surprised, that he showed himself generously perceptive about Derrick Buttress, a Shoestring Press poet whose working-class origins in council-estate Nottingham are inextricably part of his poetic timbre. Besides, for all that Eddie had little time for mere manner, he knew, and said, that Derrick was a first-rate craftsman. I know that his praise meant a great deal to Derrick, as it no doubt did to other poets of whom he wrote warmly.

Over a long life, Eddie Wainwright moved from a childhood spent among West Yorkshire mill-towns through national service to a life in education as teacher and lecturer which took him from Nottingham to Bristol and finally to retirement on the Isle of Wight. Going south, you could say. But this progress did not soften his poetic voice. Rosie Bailey is right to damn the critic who complained that Wainwright the poet ‘is still playing his single note on his one stringed fiddle.’ As she says, ‘Rooted in reality, the everyday was his territory, with its variety.’ Yes, indeed. And through the ten collections of poetry that appeared in his life-time there was inevitably much variety, much to be commented on, relished, cursed, enjoyed. He probably wrote too much. No, he did write too much, but a good selection would retain the best and, should it be made, will help to secure his reputation. I hope it includes ‘Bearding the Bard.’ In the meantime, Pleading at the Bar of Truth provides a good introduction to the life and work of this cherishable man.