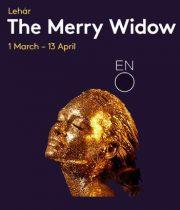 This was the first time I had seen this operetta and the idea of Viennese kitsch did not excite me.  Director Max Webster clearly shares my antipathy for schlock.  His production is a wonderful reframing of the story from a post #MeToo perspective.

The operetta is certainly ready to be reimagined.  Hanna Glawari, a rich widow is the prize desired by all males in an imaginary Balkan country.  There is a simple running gag that shows all the men, of all ages, chasing the merry widow for her pecuniary value.  The government decides that she must marry a citizen to help the country’s economy.  Innocent enough, or is it?

In the programme notes, writer Fiona Maddocks tells us that ‘Hitler adored The Merry Widow even though Lehar’s wife and most of his librettists were Jewish’.  It is easy to see why this was a Nazi hit.  The politics can be masked under the beauty of the compelling Lehar waltzes and the general silliness of the situation.  Elements of French farce are seeded by the 1861 original comedy The Embassy Attaché written by Henri Meilhac.  However, Lehar’s operetta was written in 1905 when revolution was in the air at the dawn of the twentieth century.  And Webster’s production suggests a post-Freudian and post MeToo version which delicately keeps the spirit of 1905 while also plunging us, at moments, in to Brexit-crazed Britain.  The brilliance of the production is the way Webster embraces the absurdism of Chaplinesque slapstick but layers it with political comment.  He is well served by Richard Thomas’ satirical lyrics of and April de Angelis’ sharp book.

I enjoyed the line- up of men declaring their inability to understand women as they urinated together in an open-door vespasienne.  I enjoyed the line- up of high-kicking dancers in Maxim’s declaring how their elderly clients were dosing them with the clap.  Bravo for reducing the forced, commercialized eroticism of French burlesque to the reality of French gonorrhea.

Sarah Tynan was a witty widow and Nathan Gunn as Danilo, her former lover, was solid and compelling.  Kristiina Poska brought a huge energy and sensitivity to the orchestra.  I liked that Esther Bialas costumed The Widow as a 1930s movie star while dressing the rest of the cast in turn of the century costume.  This aesthetic elegantly connected to the suggestion of consecutive time frames.

Max Webster’s Merry Widow is a hugely enjoyable version of Lehar’s loved classic and, happily, is a long way from apple strudel and whipped cream.