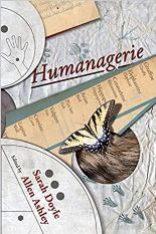 Wendy French browses an anthology of poems and stories about animals, compiled and edited by Allen Ashley and Sarah Doyle

Both editors, Ashley and Doyle, have a track record of writing and being published. Their stories and poetry have been well received by the literary world. Both of them have been placed or won poetry competitions. They both have a flair for the unusual and the natural world so they were the right team to edit this new and startling collection of stories and poems.

I wasn’t sure what to expect when I first encountered this anthology. The title is intriguing but after reading one poem and one story I understood completely. The stories and poems all identify the thin line that exists between humans and animals. The content is enthralling and difficult at the same time. This is no bad thing! Literature is there to make us think – and this anthology certainly does that. It is not an easy read in places but it is demanding and suggestive and made me think differently about the similarities between the species. And, indeed, humans.

Recently I heard Jennifer Militello, the American poet, talk about ‘The Benefits of Incongruence’ which means the way that words & ideas can be thrown together to subtly present the world in a new way. This is the feeling that I was left with after reading this anthology. The stories and poems have been chosen and compiled in such a way as to give me a perspective on the cross-over between the animal kingdom and humans. Incongruence challenges us to think about what we think we know. Every story, every poem, should have a surprise element.

The first poem in the book is Paul Stephenson’ “Animal Apology”

This is an excellent choice for the first poem. It is accessible, fun and presents a situation most of us will be aware of, the way our personalities are interchangeable depending on our mood and the people we are conversing/arguing with.

The anthology is intense and so a mixture of poems and stories is ideal for the reader. It was refreshing to go between the genres. I was particularly drawn to “Aquarium Dreams” by Gary Budgen. The story moves at a pace which allows for reflection and yet it moves forward at the same time.

“Rut” by Ian Steadman had me sitting on the edge of my seat (to use a cliché). It is frightening with beautiful descriptions of woods and trees. For me it is about the strength in and of the supernatural. The description of the chase is so closely observed that the reader becomes actively involved in the terrifying run.

This is controlled writing and the author knows how to tell a thrilling story and how to extract sympathy from the reader. We are with Cedric and dislike his bullies from the very start.

“Flock” by David Hartley is a riveting tale and I’m not sure that I completely understand it yet. It is well written and a page turner involving true-life descriptions of flocks of birds and how they are in control, be it starlings, penguins, peacocks or gulls. Who is telling the story? I won’t mention the ending – that’s for the reader to decide when they arrive there.

Maybe the fact that I have a pathological fear of birds drew me to this story.

Many of these stories and poems are metaphors for the human world and how we behave, how we show tolerance (questionable often) and understanding. There is much to reflect on in this book, to help us begin to understand ourselves. The poems and stories demonstrate the power of the animal world over the human world. We are challenged throughout this book to question power and where it lies.

However many times I read this poem I am left feeling very uncomfortable! The words and phrases bounce off one another and the four stanzas work up to a crescendo of discomfort and fear. Precise use of language gives this effect. Well done to the poet!

Whose world are we inhabiting? The owl or the human? I find this poem particularly intriguing and disturbing but a poem that deserves close attention.

One of my favourite poems in this collection is “Wojtek”. This is a name given to a Syrian brown bear. The poem tells the story of how he was orphaned and found by ’strange men’ who ‘raised him on wine, tea and milk mixed with vodka’. I also particularly enjoyed the story “Ouroborus” by Douglas Thompson.

This anthology is worth reading as it challenges so much about the world that we live in, that we take for granted. After reading it, I’m certainly looking at the animal kingdom sideways on! Where does power lie? With animals or humans? But it’s not as simple as that. Sex and gender have a part to play and the male is not always the physically dominant creature. Do we understand ourselves through the perception of animals? I am left with a few questions and would love to have a debate about this!

There is a sense of isolation and loss in this anthology. Loneliness too plays big role in both the stories and poems. But this does represent the world that we live in. The material is often wild and bizarre but the world is intriguing. The reader is taken below the surface on every page. Delve deeply and see what you come up with. There is an edge to this anthology that has a great individuality. Each poem, each story creates its own separate world, strange and alarming. It is about the transitory state of every day. We can take nothing for granted. We are engaged with matters outside the world of domesticity and intrigue.

The editors need to be commended for this powerful book. It must have been a challenge emotionally and intellectually to produce such a fine anthology of all that is unexpected but is a reality.