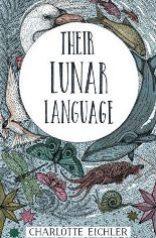 Charlotte Eichler’s debut pamphlet, Their Lunar Language, contains twenty-one refreshingly original and unexpected poems. She excels in imagery that blurs the division between humans and the natural world in sparse and precise language. It takes great skill to craft such succinct pieces of work that raise deep questions about our experience of being both human and animal. Nature is not a gentle or sentimental presence in these poems. Often it is threatening or uncontrollable but Eichler manages to convey its power with beauty and a sense of mystery.

The poems move between different eras and physical locations. Childhood features often. In “Survivors”, we might assume that the title refers to the speaker describing a boring visit to her relatives as a child. The Czech aunts appear to live in a timeless, unreflective world without mirrors, clocks or a TV. Their hallway is ‘dark with years of coats’ and the only objects of interest (a china cockatoo and toy koalas) are imprisoned in a glass case. The oppressive atmosphere created reverts to poignancy when we learn that the aunts’ arms are ‘lined with numbers’, presumably tattoos from a concentration camp. The poem ends ‘we wriggle away from their touch’, emphasising the aunts’ isolation and their lack of physical contact with the speaker.

The opening poem in the pamphlet, “Divination”, captures the slow pace of time in childhood: ‘Saturdays crawled with our ladybird circus’. The matter-of-fact cruelty of the curious child is described visually and sensually:

Fast forwarding to adolescence and ‘buying’ the future on Brighton pier, the narrator notices: ‘rows of starlings / stacking themselves like decks, noisy as a masked ball.’ The poem ends with ‘all the sea’s dark spread ahead of us’, a wonderful metaphor for the experience of being on the threshold of adulthood and an unknown future.

The title of the pamphlet is taken from the poem “Trapping Moths with my Father” and refers to the hieroglyphs on the moths’ wings that father and daughter are studying as ‘our breath / curls together in the cold’. It is a touching instant of intimacy. The father is usually ‘camouflaged by day’ but comes to life at night when he is demonstrating the moths’ beauty. This poem is carefully spaced, reflecting the intermittent arrival of these insects:

The fascination with winged creatures continues in “What Little Girls are Made Of” as the protagonist makes ‘lines of limbless flies. / Ants leave a trickle of red / down her thigh’ perhaps anticipating menstruation. The sexual and sensual nature of the child recurs in the second stanza when the girl presses snails to her legs ‘like kisses’.

Eichler is particularly good at describing liminal states. In “Halfway to Voronezh”, the train journey itself is lost in time and location as it goes through unnamed stations in: ‘An unreal place / that doesn’t count’. The narrator and her companion, a giggling fiancée, are halfway to a new place in their lives. ‘Blood and sea’ fill the carriage as the men gut fish on the table below, presaging marriage and sexual experience, a theme that is revisited when we meet the twelve brides at the end of the poem ‘posing / in varying shades of white’.

In “Clean White Bones”, contemplation of two cuttlefish highlights the differences between their courtship and that of humans. The four-line stanzas are short and humorous as well as poignant. The narrator is having trouble getting close to her partner: ‘Our fingers clash’. In contrast, cuttlefish negotiate six hearts and twenty legs during mating and ‘leave their eggs / like a dropped necklace’, a lovely image that suggests undressing for bed as well as precious jewellery. Loneliness within the human relationship is implied by ‘our half-hearted kisses’. The advantages of fish reproduction are pointed out. There is less mess and cuttlefish leave ‘ruffled versions of themselves / suspended in each blackened bead’. The narrator imagines the joy and cleanliness of producing ‘children in the weeds / brightening like bulbs’.

Birds fly in and out of several poems: owls, vultures, kittiwakes, swans, and the robin with its ‘twisted / ribbons of song’. Eichler did an MA in Norse and Viking studies and uses her knowledge of Norse mythology to explore metamorphosis between humans and birds and the inherent danger posed by shape shifting characters. Not everyone will be familiar with the story of Hervor and Volund but that does not detract from the poem titled with their names. The tension and drama between the two lovers is clear from the start. When Hervor leaves, Volund offers her ‘brooches of milk teeth / silver cups like small skulls’. These images chillingly hint at the fact that he is capable of destroying their offspring. Later in the poem Volund is ‘far above me, / a vulture with black fingers / and blood-drop head’. Things do not look good for their children whose veins ‘were green-lit –‘. The move into the past tense and the ‘smell of smoke / already in their branches’ presages their demise.

Their Lunar Language is not comforting or restful poetry. It is exciting, intriguing and mysterious. We can expect much more from this original poet in the future.