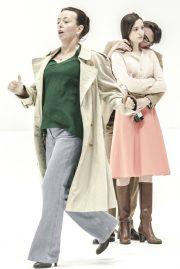 Medea is perhaps the most potent myth for the #MeToo generations.  First-performed in 431 BC, Euripides’ drama has had countless interpreters.  The action is horrifyingly compelling.  Medea, the foreign princess and sorceress from Colchis –which is present day Georgia and Turkey- enters the Greek world to help Jason find the Golden Fleece.  She falls in love with him.  They have two sons.  However, Jason is ordered to marry King Creon’s daughter Glauke.  He abandon Medea.  Medea sends a wedding dress as a gift to her rival.  The robe is poisoned.  Glauke dies.  Medea’s further revenge is to kill her sons and, it is this act, which has horrified audiences from antiquity to today.  The children are innocent, why should they pay for their father’s sins?  This myth has no redemption or happy end.  Medea is unpunished by Euripides and her outrage at her ill-treatment is her expression of her pride and honour.  Here ‘honour killing’ is not an expression of patriarchy but one of self-respect and pride.  We do not know if it can ever be defended but we see its roots in the injustice of male-domination.

Simon Stone, as writer-director, changes the names of the characters: his version is also inspired by the case of Deborah Green who has served 22 years in a US prison for the attempted poisoning of her husband and her three children.  Stone loses the concept of Medea as a foreigner within the narrative but that does not matter in his wonderful production.  Medea is now Anna.  Jason becomes Lucas.  Glauke is renamed Clara.

Stone stages his interpretation on a white stage with almost no props.  Screen techniques are integrated in to the dramatic action, for example when Anna’s sons film their parents in bed and show the video to their father’s lover, the result is comic.  Stone makes us laugh before transfixing us with the horror of murder to come.  But the importance of this adaptation, and the play itself to the #MeToo zeitgeist, is to reveal the abuse of a hugely intelligent woman by the ruling patriarchy.  Classical Greek drama is so now.

Stone’s production is set in modern day Amsterdam.  The creative team is strong and the directorial overview offers a pleasing aesthetic synthesis.  Medea premiered in 2014 in Amsterdam and comes with financial support from Holland and Fonds 21.  Marieke Heebink won the Theo d’Or prize for her portrayal of the main role.  The myth is so strong that it regrows with each telling and with each cultural transplantation.  This is subsidised state theatre at its radical best.

Blueprint Medea, my own adaptation of the myth, opens at the Finborough Theatre May 21-June 9.  I have transposed the original setting to London today.  Fascinated by the idea of Medea as an outsider, after all Colchis is also part of modern Turkey, the original story of woman-in- political-exile, is partly based on interviews with former Kurdish soldiers from Turkey and Iraq.  My 2019 Medea is a Kurdish warrior from Turkey who comes to London on a false passport.  She has fought the Islamists and arrives with a history of war.  In London, her Jason is the son of an Iraqi taxi driver.  They are both Muslim but their cultures are utterly different and the battleground of love, sex and patriarchy is played out against the Middle Eastern conflicts in Syria, Iraq and Turkey.