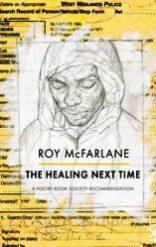 When Claudia Rankine was asked if she would write about Mark Duggan, who was fatally shot by police officers in August 2011 she suggested instead that the questioner write about him. Roy McFarlane has taken up that challenge. Although the second section of the book does focus on deaths in custody (or otherwise involving the police) – and not only of black people – The Healing Next Time, isn’t just a litany or a British version of Citizen. The first part, ‘New Millennium Journal’ considers aspects of racism in the UK, covering 1999 – 2006. In ‘2002 – What we do when things fall apart’,

The regular, football supporter wants to fit in but is still regarded as alien and grows up feeling the weight of a different religion, of being singled out by far-right supporters and the growing normalisation of the rise in far-right beliefs. The relaxed long vowels of the first quoted stanza contrast with the tighter, shorter vowels in the second where stress and wariness dominate.

Attention to key details is continued in ‘Joy Gardner, 1993’, which is about a woman who died from suffocation after police taped her in the process of removing her from her home to deport her,

The poem doesn’t end there but reminds readers that the poem’s subject isn’t a mere statistic and the lengths gone to cover up mean it could happen again. The repetition of variants on “tape” is a deliberate reference to the 13 feet of tape Joy Gardner was bound with.

The poem that was the starting point for the collection, ‘Mark Duggan, 2011’ is shaped like an angel but acknowledges,

This was a death that sparked riots and, yet again, the reaction from police and officials was denial and deflection: a response that implies the man’s death wasn’t worth apologising for or even worth being honest about its circumstances.

The prose-poem, ‘Conversation’ has the stage direction “Nina Simone playing in the background of a Café”

The poems in The Healing Next Time do precisely that: bear witness, acting as a reminder of the existence of institutional racism which implies that some lives aren’t regarded as mattering. The collection ends on an optimistic note however: change is a slow process but worthwhile as long as we can wake with hope. The Healing Next Time is an important collection from a compassionate poet.