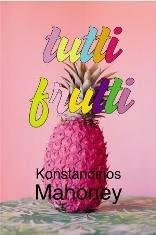 You could well be mistaken on looking at the cover of tutti rrutti – a bright cover with individualised coloured lettering and a pink pineapple – and think here is a book with many ‘fun’ poems included. There are, of course, witty, clever poems, which capture the personality of the author (who appears a kind and loving extrovert). As loving and fun-seeking as Mahoney is, here is a book of well-crafted serious poems that make the reader contemplate the world and our place in it. Emotions including love, anger, shame, disappointment, resilience, compassion and acceptance are here. Here are some lines from ‘Six Hundred’

This poem come towards the end of the book where Mahoney is reflecting on life with his estranged daughter. The book is a journey from childhood through his relationship with his mother, marriage and the break-up of his marriage undermined by his mother, Mahoney’s sexuality and other relationships.

On childhood he writes

On his broken marriage he says, bitterly

Compassion runs strongly through most of the poems. ‘Sugar Babe’ was written for Mahoney’s aunt.

There are a few poems that sit uncomfortably with me because they show the pain that the poet has felt at different times in his life. I am not being derogatory here because these poems do enhance the collection which covers many areas of contemporary life. These poems are both honest and sensitively written and the whole book speaks of an unashamed existence. Mahoney is not afraid to tackle hard subjects like birth, growing up, sex, decay and death. The following stanza shows Mahoney’s intelligent use of language and words. Naming him mendicant gives the beggar a more respectful identity than just the word ‘beggar’. Mahoney respects everyone for who they are and not what they are.

The poems are about identity and new beginnings, the poet seeing himself in another country, foreign country or the country buried within himself. We all have countries buried within ourselves and this book grants us permission to be honest about it.

There are physical as well as intellectually demanding poems here.

The poems are relevant to all of us They close in on our own insecurities, loves and losses. Our own sexual prowess is challenged again and again through the different landscapes and countries that are brought to us in colourful and meaningful ways.

This is a lyrical unostentatious collection of poetry in which Mahoney has an ear for natural rhythm and rhyme. This is also from ‘Ladyboy’:

There is a spontaneity and delight in these poems. They breathe fresh air into the world we know – or one we may not know yet but have just read about – as Mahony takes us across the planet to far-flung places, for example. China, Hong Kong, Greece and Europe. Each poem is a narrative that opens up another world (sometimes physical, sometimes emotional) within the reader that we may not know or maybe have forgotten about.

One of my favourite poems is ‘Vampire Madonna’. This poem made me weep. It records in a few pertinent lines the progression of time and ageing and the changing perceptions of how we see our parents as we grow and learn.

This book is a tour de force. The style and form of each poems fit the content perfectly. The reader is led, sometimes gently and sometimes not so gently, to different places round the world and places with ourselves. The last poem in the book, ‘African Icarus’, sums up the man I sense Mahoney to be: through the pain of his own experiences he is always looking out for others:

But I want to finish with one sentiment that stays with me:

The writing is disciplined and mature with the recurring themes of love, loss, ache of separation and the need to set it all down in writing for others to read and understand what makes us human and how we can survive. Some of the poems have been set to music by Steve Halliwell from Little Machine and accompanied by Clare Harriot. With Mahoney’s ear and eye for cinematic detail and rhythm they work well encompassing another art form.

Keep on flying Dino, we need more of your poems. They speak to many of us.