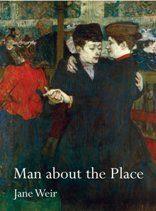 The power politics of gender roles in a male dominated society is the object of reflection and discussion developed in Man about the place, the title itself a quotation from D. H. Lawrence’s novella The Fox. Woman’s condition is observed with passionate involvement and analysed with irony in this collection rich with intertextual references. Besides D. H. Lawrence’s work, there are explicit references to H. E. Bates’ novella The Triple Echo, Henry James’ The Wings of the Dove, Leonardo Sciascia’s The Long Crossing, and works of art such as the ‘Iron Man’ sculptures by Antony Gormeley, Louise Bourgeois’ ‘Maman’ and Artemisia Gentileschi’s ‘Judith and Abra slaying Holofernes’. These connections highlight both the marginalized and trapped condition of women and the predatory, domineering quality of man’s role, to which women react in passive or in overaggressive ways to gain self-respect and possibly independence.

The story of The Fox is the motif that recurs in most of the poems in direct confrontation with the themes and the characters announced at the beginning of the novella: ‘I played Branford you played March’, the two main female characters. The fox, the notorious trickster of western literature, represents Henry, the manipulative young soldier who comes to the woman’s farm and wants to settle there, marrying March. This figure is discussed – almost dissected – in his ambiguous, tender and eventually threatening behaviour. The poems are woven together with stories, figuring other possible relationships, different perspectives and ironic comments on traditional patterns. As a matter of fact, the Sun and the Moon, which man keeps back from woman, are reduced to papier-mâché objects. It is an intentional de-mythologization of the symbols of power, of the archetypes that keep a woman under man’s control. Spiders and weaving are possible alternative images with which Weir, a textile designer herself, confronts the repetitive pattern of the Iron Man, who looks ‘alone’, ‘content to rust,/weed, barnacle’, and who does not ‘trigger intimacy’. His condition is observed with overt irony:

Nevertheless, in the stories analysed, women are often powerless, defeated, forced into passive roles and self-denial. For this reason, the hen’s beak is ‘a blunt knife’ and the mole, ‘the reckless blind adventurer’ representing the independent side of woman, is pitilessly killed by the two girls in D. H. Lawrence’s short story Second Best. An urgency to react to these narratives is exposed in their ironic desecration as in ‘What Could the Rain Do to Me?’ referring to The Wings of the Dove:

Men are strangers who interfere in women’s dreams and appropriate their creative power, as in Branford and March’s story. Opposing this ‘battle to catch her’, to the ‘profound battle of wills which takes place in the invisible’, as remarked in The Fox, is rather useless. Instead women need to create new patterns, weave their patient textiles in spite of the intrusive men’s discourses, which are not only abusive but often untrue and ignorant of women’s intentions and desires.

The contemplation of the stifling of women’s hopes is sometimes bleak as in ‘The Bat’:

Women’s reaction is sometimes passivity – as in March who is mesmerized by the fox and consequently by the young soldier whom she thinks knows her, thereby losing her self-respect. She is attracted by his scent; he is described as ‘an olfactory saboteur’ who anaesthetises woman’s ‘scent buds’ with his ‘glorious stinking’ (‘Stink’). Other times the woman’s reaction is sheer anger mixed with impotent desperation, as it is in Branford, or in ‘an obstinate refusal to lay eggs’. There is rage in the ironic evocation in ‘D. H. Lawrence Takes Stock of Artemisia Gentileschi’s Judith and Abra Slaying Holofernes’

This anger culminates in ‘Duped’, which refers to The Triple Echo by H. E. Bates, where the ambiguity of being duped by appearances seems to be visceral:

The protagonist of the story, Alice Charlesworth, eventually kills the deserter who became her lover and whom she hid and dressed as a woman; and she also shoots the sergeant who fell in love with him. The suggestion seems to be that gender roles ought not to be dichotomous, male/female, but multifaceted.

Relationships are further explored in two riveting poems, ‘Helping to Put Your Coat On’ and ‘Longing’. The former uses the metaphor of textiles and tailoring to describe intimacy:

A sense of loss mixed with a reminiscence of passion is in the last lines as well as in ‘Longing’. It is an illusion of completion, a fulfilment which is never attained. It is a ‘fallacy’ similarly to what is described in ‘The long crossing’ by Leonardo Sciascia where the Sicilian migrants land in their home island instead of America after a long voyage. It is an illusion and a metaphor for the woman’s condition: she thinks she has landed in the promised land of equality, instead the ‘deliberate destruction/of the Mothers’ work’ carries on and the ‘Fear for the future’ cannot be quenched (‘We are Women, We are Girls’).

The fox returns in the final poems of the collection. Its figure is fragmented and dissected in odours, in visual images of ‘Copper Sulphate, Verdigris, Blue Vitriol,/Blue Copperas, Bluestone – nothing fixed’, in a brooch, and in its crucifixion it is ‘splayed flat,/nailed to a board, no longer whole’, after Henry has killed and skinned it. Nevertheless, its presence is indelible and comes back in the final poem, of which the first part is a loose quotation from The Fox just before Branford is killed by the falling of a tree cut down by Henry. The address to the reader is direct and uncompromising:

The last section of the novella, which is about the difficult relationship between Henry and March after their marriage and their decision to move to Canada, is not commented on, maybe because considered irrelevant.

The conclusion does not seem to give a positive solution to the ‘wilderness of women versus men’, where a woman still struggles today for her identity and liberation, and a man is cast in an iron armour, cunning and possessive toward her. There is no final rainbow on the horizon but a desolate landscape.