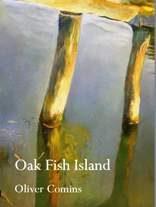 This debut collection appears after a long gestation. Oliver Comins has had four pamphlets published: Playing out Time in an Awkward Light (Mandeville Press, 1992), followed by a lengthy gap until a burst of three titles, all from Templar Poetry, in 2014, 2015 and 2016. Less than a handful of those poems are repeated here. Oak Fish Island contains an explanatory note about its internal timescale and structure, suggesting that Comins has re-visited his early work and then allowed his more recent poetry to rise from those foundations. The collection is divided into two roughly equal halves with, as Comins tells us at the start of the Acknowledgements, the poems in Section One written during the late twentieth century, and Section Two being post-2000 poems. With some poets this might have been immediately obvious: there would have been noticeable changes in, for example, style, content, political or social reference. I’m sure you will be able to supply any number of examples of your own. Yet in Comins’ poetry I could see no major differences in style either side of the millennium. If he hadn’t pointed out how he had structured Oak Fish Island I wouldn’t have noticed. After several readings, with a corner of my mind trying to identify changes, all I could see was continuum – a poet who is a consistently quiet, thoughtful observer of people and places, often something of an outsider, and one whose chosen style is free verse. To borrow a line from Auden, the line he travels has the English gauge.

Childhood activities and childhood friends are a strong theme in both sections. The opening poem, ‘Quarry’, is set on ‘A family holiday in the nook of childhood: / the dale-head camp site edging on trees’ where two boys trail a stag. That use of ‘nook’ drew me in straight away. In ‘Floral Clock’ (not the expected regimented formal planting of a municipal park but the way a garden tells the time) he lets memory reconstruct

Dens: they were the stuff of childhood, our parallel to the grown-up world. Another childhood poem, this time from Section 2, provides the collection’s title, a strongly-drawn memory of two boys fishing for sticklebacks and minnows, although here Comins brings in his adult self in the final stanzas, observing how much of the place has vanished, and how ‘… there’s nowhere at the bottom to hang out / for hours, no island in the middle of summer.’ His childhood friend has disappeared, too, making real the way the two boys parted after a day’s fishing when ‘… we made a sloped return to our separate homes, / wet footprints parting where the tarmac forked.’ Perhaps this bleaker perspective is an element in the twenty-first century poems, with Comins starting as a participant and then shifting into being the observer watching his own past fall away. However, the carefully pared-back language, matching the precision of detail and balanced with clarity of syntax is a constant in both sections – and a delight to read.

Place and landscape, and the layers of history within the land are a rich source, whether the place is named or not. Pausing to rest on ‘Edge Hill’ – ‘… the panorama spreads: John Leyland’s “champion land” of Feldon / still demands its gage of solid husbandry’, while a tractor is busy ‘working the farm below a Saxon boundary.’ Comins reveals the timescale within the view and farming’s relationship with it. This, however, is not simply a reflection on the past:

So a stanza that starts in 1642 jumps to late twentieth-century, then plays with our expectations in the use of ‘barrows.’ In ‘Ffoi’ he shows us the hardness of stone half-way up Mynydd Carningli – ‘… the tip /of a slow volcanic anger.’ ‘Skylarks over Uffington’ sketches the hill’s geology in a single stanza; and then we are in the present moment, above the valley’s trains, before the final stanza takes us back to the ‘dried layers of ocean’ that had formed the chalk. When he travels abroad – as in ‘Eating Lions with Coffee’ – he has the same quiet, attentive register, the same balance between his own space and what happens outside, and what connects them. As he writes in the final stanza of ‘Background Noise’

It’s natural, then, that he listens to other people – known, and unknown. In ‘GWR Footbridge, Long Distance’ he recalls overhearing one side of a cellphone conversation, the speaker describing a medical emergency and ambulance dash, and how his imagination inevitably fills in the gaps, concluding

What began in anecdote has grown into a more universal recognition of human connection. His own relationships and children are unnamed, held at a small distance within the poems; it’s friends from the past whose names we learn. In ‘Rose Bed, Wisteria and Apple Trees – Agnes Booth fl. 1925 to 1985’ he celebrates the woman who made him a golfer, remembering her through her grip, her name on the club’s honours board, her garden (now recalled via the trees in his own) and how what she taught him remains –

Comins is poet who invites longer quotation; his meditative observation deserves this, so I’d like to end with quoting in full ‘Swan Song i.m. Ursula Wadey’. A note explains that she was a mature student (fifty years older than her fellow undergraduates) when Comins studied at York. The visual detail builds up the texture of her fully-realised life while the poet stands back, letting her be centre-stage.

There is a sense throughout this whole collection that Comins, too, is writing about what matters and what will survive. The long gestation of this collection has given him time to consider what is best in his work; a quiet register, his care that human connections should be maintained, even as technology can sometimes distance us. It is a bonus that Templar have produced a physically attractive book which is a pleasure to handle. In every way it was hard to set this collection aside.