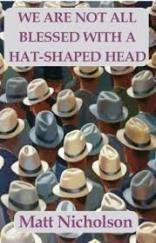 Peter Ualrig Kennedy finds some interesting nuggets in a rather uneven collection by Matt Nicholson.

The title drew me in. “We are not all blessed with a hat-shaped head” sounds quirky, and the poems are indeed quirky although perhaps not in the way that I had been expecting. I read the book from start to finish right away; my first impression was that there is a lot of promise in this work, but it needs rigour. There is much to enjoy in this collection, but oh for an editor with a firm hand, a benign critic who would remedy the occasional maladroit passages. On subsequent readings I felt a stronger nudge towards understanding what is going on; there’s quite a lot of fun amongst the angst.

This scores high on the nostalgia scale, and there’s a nice surprise at the end. I liked ‘On the bias’ which is humorous and employs its white space to excellent effect. And there’s a certain self-awareness in ‘Don’t shoot’, as well as an understanding in more ways than one of the times in which we live:

Nicholson paints some intriguingly imaginative pictures, as in ‘Foreshore assumptions’: “If I stand here, / still enough, / quiet enough, / and frown, / dogs and walkers / assume I am / here to grieve …” and similarly in ‘Quantum Sounds’ of which this is the opening stanza:

I like the imagery, I like the subjunctive, I like “scatter-gun clouds” – but in the second stanza we come across some confusing juxtapositions: “shorthanded penitence”, “defended crescendo”. I should like to think that Nicholson is consciously employing parataxis here to pique our interest.

‘Horizontal light’ goes in for some effective alliteration in the first four stanzas: “There is a fire / in the furnace, / in the factory / of the sun.” And ‘The Bowhead songs’ is insightful and delicate, evocative of whales’ song and distress: “They have seen you / tossed / on wounded waves” is a truly evocative hypallage, an exchange of epithet which really works. The poet invests a necessary touch of anger in the stanza:

The Bowhead whale, that whale which sings its complex songs, is today one of the most critically endangered large creatures. This poem is a lamentation and rightly so.

At the start of ‘The opposite of entropy’ is a descriptive “Half-cut moon / hung, bent, / in mud-black sky” – a compelling image; then a couple of stanzas later we read: “wind, like knives” which I worry is close to cliché. The conclusion of the poem is obscure:

Who is doing the diving? Is it the poet, and is the poet doing some hard work to oppose entropy? Is his dive an adaptive evolutionary change? I think we should be told.

I would not be surprised to find that Nicholson is an effective reader of his poetry. The thing is, a stand-up poet can get away with mis-spellings in the speaking of his or her lines, but in the written word such errors unfortunately serve to undermine the integrity of the poem. Thus in ‘An allotment of minutes’ we read that a blister “might harden to a callous”. In ‘For the artists’ there is some kind of splat, “on canvass”. The poem ‘Augur’ plays with the “ordinance of thunder” – we know what the poet means, it is shorthand for the ominous approach of inclemency of some variety or other; we do not think that he is speaking of an authoritative order or of a religious rite. It would be convincing enough in an oral reading; not on paper.

In short, there is a great deal of talent here, but it remains a collection in need of a good editor; and I have to say of a competent proof reader. If Matt Nicholson can be braver and tighten his style he will be capable of some really good work.