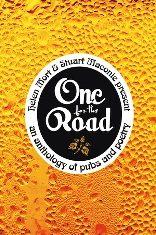 One for the Road

Now and again a book arrives that is so at ease with itself, it’s as if it has always existed. The cover of One for the Road shows condensation on the side of a golden pint, inside are relaxed drawings of barflies and bottles by Ted Schofield and the poems are in sections with titles like ‘It Was That Kind of Place’, ‘Ship in a Bottle’ and ‘The Regulars’.

The editorial work must have been a joy. By the age of 25, Sheffield-born poet Helen Mort was the youngest ever poet-in-residence at The Wordsworth Trust with five Foyle Young Poets awards, an Eric Gregory Award from the Society of Authors (2007) and 2008’s Manchester Poetry Young Writer Prize to her name. Her first collection (of two so far) with Chatto & Windus – Division Street – won the Fenton Aldeburgh First Collection Prize (2014) and was shortlisted for both the Costa and the TS Eliot prize that year. She writes creative non-fiction too and, according to her website, is currently working on a novel.

If you enjoy BBC Radio 6 on a weekday afternoon, you will know Stuart Maconie who has been a radio DJ, television presenter, author and journalist for many years. Cider with Roadies (possibly my favourite book title ever) describes his years as a music journalist, Pies and Prejudice reveals ‘the truth’ about the north of England, Adventures on the High Teas moves his focus to Middle England and Never Mind the Quantocks collects his pieces for Country Walking magazine. His experience of pubs dates back at least to his days in a college band performing in the Wigan Bier Kellar.

In her introduction, Mort says: ‘No matter what physical presence it has, the pub is an imaginative space too, a theatre of dreams, a refuge and an escape. Pubs can be troubled, troubling, haunted and occupied, lost and found. But they are always a part of our cultural imagination.’ Each poem was selected, she goes on, ‘because it celebrates the pub in a way that isn’t straightforward, inviting the reader to look again’.

The collection is remarkably comprehensive, with just about all aspects of pub life covered, and there are too many excellent inclusions for me to refer to them all. How do you sum up your favourite pub in a poem?

‘The Eel’s Foot’ by DA Prince has the perfect opening line – ‘We’ve earned this pub’ and closes:

Graham Mort leads us gently through years of regrets and losses that have been soothed in ‘The Ship’ until he shares a bevvy or two with his ‘oldest mate’:

In ‘Friday at The Moon’, Maria Taylor nails that evening where things got superbly out of hand, or might have done, if she could remember:

‘Houses That Used To Be Boozers’ hovered longer than most, not just because of its pub-song lilt and magnificent rhymes:

Though for both editors, the Englishness of pub life has a special warmth, the Scots and Irish are not left out. In ‘Downtime’ Rachael Boast honours ‘an inglorious hour / below street level, a dram with a clean finish / set fair and square on the table.’ James Caruth’s ‘The Priest’ juxtaposes the barman’s ministry at the pumps with ‘a priest at his marble altar’:

Caruth also takes us for a pint with TS Eliot in ‘A Drink With Tom’, ‘Waste Land’ style:

Catherine Smith’s ‘Snakebite’ – for all the young folk blagging their way in to get served – starts:

Later, ‘The drink hits the spot and / everything is funny’, until:

The football pub works its magic in ‘Two Halves’ by Anthony Wilson:

Like the best pubs, this book keeps welcoming the reader back, varied and consistent in its voices, always friendly. Congratulations to smith|doorstop for spotting this extraordinary gap in the market and presenting it with their usual simple elegance. In Mort’s introduction, she says: ‘I’ve come to believe that a poem is like a dram of single malt whisky – concentrated, mind-altering, leaving a sweet sting in the mouth.’ She goes on to hope we get ‘pleasantly drunk’ on this book. Cheers. As Miranda Yates advises in ‘Your Shout’:

Rosie Johnston‘s three books of poetry are published by Lapwing Publications (Belfast). Her poems have appeared in various magazines, on the Poems and Pictures blog of the Mary Evans Picture Library website and in Live Canon’s ‘154 Project’ celebrating Shakespeare’s 400th anniversary. She has been poet in residence for the Cambridgeshire Wildlife Trust since 2014. www.rosiejohnstonwrites.com