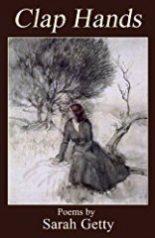 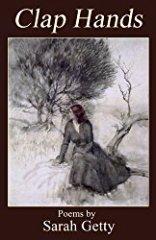 These fine poems were published posthumously by the poet’s husband from a manuscript she had prepared two months before her death.  Chicago-born  Sarah Getty (1943-2009) writes from an expertise in English literature and a keen eye for the here and now. One long poem is spoken by Mary Shelley  after her husband’s death; another, a villanelle,  takes its epigraph from Macbeth and contains allusions to Sisyphus, Procrustes, Francis Thompson, Jack and the Beanstalk, and Lazarus, but is a very personal riff on insomnia by “a white-haired lady poet, past her prime / wearing a plain white L.L. Bean nightgown”.

Fortunately, a few notes at the beginning of the collection identify some of her quotations and allusions. (The title comes from Yeats’ “Sailing to Byzantium”.)

“Lamentation—Relict” is a long monologue by Mary Shelley, now an old woman looking back on her life. We find her sitting in Percy’s boyhood bedroom mending a jacket lining while recalling her own children. Her mother died after giving birth to her, and she lost three of her own four children in early childhood. Percy, as we know, drowned in the sea off Italy. Mary has much to ponder. She ruminates on life and death and creation—whether of her babies or her fictional monster and his would-be mate. Getty manages this scene-setting and the pleasing interplay between past and present in a spare, imaginative way—the old lady, now living with her son (also named Percy) and his wife in the old family home and mulling over the events of her youth.

“Lamentation—Relict” is one of a series of twelve poems called “The Brood of Night”, based on an idea in The Dream and the Underworld by James Hillman. Other poems in the series deal with such topics as envy, old age, sleep, Nox and Eros, but there is nothing predictable about any of them, for all that they share a common inspiration. Sarah Getty has used the themes as a springboard for her own richly imaginative development of them.

The second section, “First Contact”, begins with a homage to Wallace Stevens’ “Anecdote of the Prince of Peacocks.” Her “Anecdote of the Grandmother” introduces the very personal tone of the poems in the rest of that section. “A Little Song from Your Grandma” is addressed to her unborn grandson. “Oh, little one, are you on your way? / We are wondering—have you started? / Spring has come all at once. The big old oaks /are opening tiny pink fists, bushes are yelling / yellow all over town.” It is a charming poem by a charmingly impatient grandmother. It ends: “Already I, your mother’s mother, / have knitted this little song. / Have you started? Are you on your way?”

Another playful poem, the 16-line “Baby’s First ABC”, describes the conception and birth of a baby, and most of the principal words are in alphabetical order. As with “After the X-ray Appointment”, it is always a good idea to check for sly games in Getty’s poems, like the first letter of each line spelling out words (“BATTLING THE ELEMENTS” in this case). It seems to be a poem about shovelling the snow in a car park and struggling indoors with a bag of groceries, and the envelope containing an x-ray, but the sharp-eyed will notice the extra message down the side.

A poem about her grandson’s peanut allergy, “Forbidden Fruit”, is a 26-line poem, each line beginning with a letter in alphabetical order. The poem is so skilful and conversational that you hardly notice the device.

But not all of Sarah Getty’s poems feature these little games. Some of them are comments on travel destinations. In the third section, “Into Egypt”, the Nile Valley yields some thoughtful observations. In “Moderne” she visits the temple of Hathor at Dendara. A zodiac is carved on the ceiling along with a figure of the goddess Hathor apparently flying. Getty makes the connection between this ancient Egyptian figure and an Art Deco motif: “No longer daughter of Ra or sister-wife of Ged, she’s become her own / streamlined New Woman, with a flapper’s bangs and pouting mouth.” The irony is that such an ancient personage comes to be a symbol of the latest thing: “she’s come a long way escaping the old stories, morphing her form // into new incarnations—ondine sculpted by Lalique, ‘Spirit of Flight’ / at the ’39 World’s Fair, Myrna Loy and Garbo sheathed in satin, / Radio City angel trumpeting the end of all that’s old.”

Part four, “Once out of Nature”, combines some concerns and approaches evident in the earlier sections. Looking at huge carved sculptures left by the Olmec civilisation, she marvels at their size and even the gigantism of surrounding nature: “Around us / ginger torches kindle, mammoth philodendrons / thrive, wound round with ivies fit to lasso dragons.” How inadequate the tourists are, “small and sweating in polyester blends”, to communicate with the enormous heads. “The great heads press their lips / together tight; the corners of their mouths turn down.”

Clap Hands is a tribute to a poet whose voice has stopped but whose intelligence and wit live on in her poems It is well worth sampling her poetry in this volume and catching up with her two previous collections The Land of Milk and Honey (1996) and Bring Me Her Heart (2006).