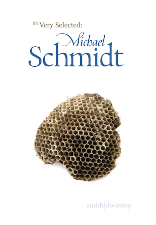 This new series of Smith/Doorstep pamphlets presenting poets in a “Very Selected” format (in Michael Schmidt’s case 20 poems in 35 pages) must aim to include in its small compass some of the author’s best and most representative works if it is to succeed. Poets are not always the most accurate judges of their own work, but here we have a sound introduction to Schmidt’s poetic world.. In a busy career dedicated to teaching, publishing, promoting, and writing about, the poetry of others his own has tended to be, by comparison, side-lined. Unfortunately so, for at its best, his work has undoubted distinction, not to say, a sort of fastidious wit and charm.

As one would expect he writes with a strong sense of tradition – one can hear sometimes his modernist forebears as if at a distance urging him on. Sometimes they can lead him astray: the random erudition that invariably goes with high modernism can also mar a poem. So it is with the very first poem in this selection, ‘A Phrase of Dryden’s Virgil’. The phrase in question – “All was the night’s” – has in fact nothing to do with Virgil, or Dryden’s translation of the Aeneid, but occurs in a relatively early Dryden poem, ‘Annus Mirabilis’, which records the dire events in England in 1666. We are thus sent back to a context which is at odds with the use that Schmidt wishes to make of the phrase: where Dryden invokes a sleeping London on the night when the Great Fire of London started Schmidt invokes a sort of opening into Hades – a pool where “a shimmering bough of starlight / Marks the easy entrance to the dark”.

I am also lukewarm about ‘Sisera’. A little research reveals him to be a Canananite commander whose fate (as recorded in the Book of Judges) was to die by having a tent-peg hammered into his temples. The poem is a slight one, and it is not clear (to me at least) why Schmidt has chosen this somewhat recondite figure for his protagonist, nor why, if Sisera is speaking as one already dead, he has cause to fear his murderer’s return. “My name is Sisera”, he tells us, then “I will not say her name: / She may still be alive”. Her name, in fact, was Jael, but I am not sure if knowing this helps us any better understand or appreciate the poem.

This selection includes five other poems which are based on (rather more familiar) biblical narratives. In ‘The Brother’ the speaker is Cain: his jealousy of his brother is revealed in an address to God in which the language is spare, exact, and menacing:

In ‘A Dream’ the speaker is Noah: the poem is dedicated to C.H. Sisson, and imitates the work of its dedicatee in displaying a sureness of rhythm that gives us the feeling of a rhyming poem though without the actuality of rhyme: it is not only a technical tour de force but also displays a sly humour that one comes to see as typical of Schmidt. The subject of ‘The Resurrection of the Body’ is the raising from the dead of Jairus’ daughter. Schmidt’s resurrection has an intense physicality: the girl, aged twelve in the Gospels, in here “almost a woman”; he records “the down at her crotch, / Flat belly firm, the handsome small domes of her breasts”. Jesus too is endowed with a powerful bodily presence, with “his cool skin, his smell of the dust of the road”. The girl sees where “His shirt falls open, she sees where the wounds will be”. Other biblical narratives too are physicalized, eroticized – and in general subject to Schmidt’s unabashed revisionism. In ‘Jacob and the Angel’ what we have is clearly an exhilarating (and exhausting) homosexual encounter:

In ‘A Change of Affairs’ the Parable of the Labourers of the Vineyard is given a new take: the labourer who arrives late is admired by the owner for his “body with its sweet / Scent among reeking flesh”. Not only that but he is given the vineyard, and the former owner now labours on his behalf: “Next day I come at dawn / To work in the hot sun”.

A poem like ‘Pangur Bàn’ might stand in need of a note for those of us who do not know that Pangur Bàn is the name both of a medieval Irish poem and of the poet’s cat. Yet it has an exuberance about it that that does away with any lingering obscurities, even for non-cat-lovers: the image of Saint Jerome, familiar from innumerable Renaissance paintings, is brought to life with his desert cave, “wardrobe of robes” despite the hot climate, and always “on Jerome’s escritoire by the quill and ink pot / The long black thorn he drew from the lion’s paw.”

In an age when instant accessibility counts for far too much Schmidt offers the old-fashioned virtues of solid craftsmanship, linguistic precision, and awareness of writing in a poetic tradition reaching far back into the past. Sometimes too he writes with engaging directness, as in ‘Agatha’, recalling a childhood friendship, the girl who sat on the playground wall: “I look up at your swinging soles and still I love you. / I want to tie your right shoe lace and kiss your shin.” The finest love poem in the collection is ‘His father was a baker . . .”, written of his partner, once the baker’s son in Oaxaca in Mexico, recording the smell of “loaves that rose in ovens”, and ending in the understanding that it is now his fate

Most poets are, of course, minor poets, and it is a lucky minor poet who is known to posterity by as many as twenty poems. Posterity in time, we presume, will do its winnowing down. But in the meantime we must make our own choices. I suspect, of those readers who rise to the challenges, and reap the rewards, of Michael Schmidt’s poetry in this “Very Selected” format, a good many will want to go on to explore the rest of his (by no means extensive) poetical oeuvre.