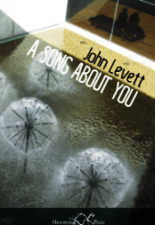 Almost three years to the day since I submitted a mainly celebratory review of John Levett’s previous Shoestring book The Nick of Time, I open his latest with anticipation – I’m a fan after all. This time, though, some of my quibbles in that article resurface as if to bite and I have to read as far as page 23 (‘A Cardboard Witch’) before I find anything comparable:

There is a clutch of tough, sad poems in the earlier book, notably ‘The Holly Leaf’, ‘Obsequies’ and ‘Funeral’ which serve to contextualize what might be happening in this latest one, where the contents of the playschool box are exotically described (he can do this kind of thing standing on his head) before the punch lands:

As the book’s title almost suggests, many of these poems respond to grief and loss, and so the ‘you’ is equally likely to be the reader, since everyone dies. This one is a fine example – but even here we begin with ‘your’ and end with ‘her’ and are consequently only slightly wiser than we were in the first twenty-odd pages. Some of the poems do drop hints as to who the lost loved one(s) cannot be, and so we might arrive at a kind of conclusion before long – but am I being disingenuous if I say I don’t want to do guessing? Not in poems so near the heart and close to bone. A complete and economical eight-liner, ‘A Death in the Family’, successfully holds back both feeling and information so that the focus shifts to the child unaware of a narrative:

Although I find this hard to visualise (is the glass a mirror? Where does it take place?) I imagine some would argue that what the poet isn’t telling us we don’t need to know – and usually I can accept this – but for some poems impersonality is best achieved by and through the overtly personal. In other words, find some way to tell us, without the obfuscation, and we’ll empathise.

There is a different but related question arising from the kind of pyrotechnic displays Levett has always loved and which, at their best, served well in poems in which they were submerged. When this doesn’t happen, however, and the form is allowed to drive the content, the result feels like trying to read something through a tarp:

This is the opening, and thirteen lines later the sentence ends when ‘Two silver-towered refineries appear’. There’s a comparison/contrast with Conrad, the one presumably becalmed as Marlow when he waits to journey and confront a heart of darkness, so I’m wondering, is that it? I’m not sure because the poem stops in full flood after embracing two sentences in twenty-seven lines. This time I want to ask about the point, the nub, the core of such a poem aside from descriptive fluency and an apparently effortless weaving of detail that make up the rest of it. I have a picture of someone working the notebook for possible examples and deciding to use them all.

But maybe I ought to acknowledge the fact that there are enough poems here to make the book worth having, even if these are relatively few in number. To emphasize the positive, the dark comedy of ‘A Pair of Boots’, placed near the end, is more down-to-earth in its use of unspectacular detail. The borrowed boots, too big for the poet to fill, are now in the charity shop where the son imagines his Dad coming back to collect them. The nostalgic ‘8/-‘ (being the cost of a book in 1965, worth two hours on a factory shift) presents the father’s ghost refunded in a dream by two 20 pence pieces:

The final poem ‘Yes’ plays on the idea of a message left on an answer machine: