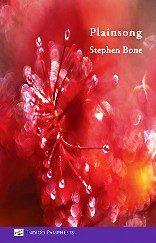 Bone’s first collection, In the Cinema (2014), and work published subsequently have established his expertise in an admirably judicious form of poetic minimalism, with a gift for laconic observation that would be the envy of many a short-story writer. He appears to have applied his stylistic approach to the size of this collection, a pamphlet-ette of 23 pages which nevertheless paints a full, coherent and memorable portrait of nature at its most compellingly quirky.

“A body of chants used in the liturgies of the Western Church, monophonic, consisting of a single, unaccompanied melodic line. Its rhythm is generally freer than the metered rhythm of later Western music.” Thus runs the Wikipedia definition of plainsong, and these nineteen poems, perhaps more murmurs than chants in most cases, go about their business with a quiet but surgical precision, as they uncover the resilience and often the menace lurking beneath some of the natural world’s most ostensibly innocuous creations.

Readers with botanical expertise will have a clear advantage in picking up the many allusions to plants and flowers, but those like me whose only point of reference was the Venus fly-trap (which Bone, never one for the obvious, wisely omits to cite) will enjoy the thrill of discovery in learning more, for instance, about the subject of ‘Ode to a Giant Water Lily’. Though like many other plants in the book it is pale in colour, and pure in apparent connotation (“you flower / bridal white”), this “Gigantic Amazonian” is actually a

As the poem progresses, so does the threat level, with the lily’s floating pads revealed not only as “stepping stones / for Lily Trotters” – those who missed the relevant Attenborough documentary need to know these are wading birds known for their ability to walk on water – but “sunbeds for caimans” (with shades of Lady Macbeth’s “Look like the innocent flower / but be the serpent under’t”). More disturbingly still, the final lines suggest a horrific end for unsuspecting youngsters who assume they can imitate the graceful steps of the lily trotters: “Vast green / salvers on which to serve / a grinning child.” Alongside the gruesome shades of Titus Andronicus in the creepily formal “on which to serve”, what an eerily effective choice is that “grinning”, evoking the skull of Death, or perhaps the horrific grimace of Geoffrey Hill’s “We flinch and grin”, when we might have expected “smiling”. Bone’s work is full of such joltingly unsettling surprises.

There may be no fly-traps, but the book abounds with lesser-known dangers, such as the butterfly-impaling Aspidistra Eliator, and the overpoweringly fragrant Moonflower, which despite only blooming for one night can use its moment of glory “to intoxicate / hawkmoths for miles around”. In ‘Sundews’, the eponymous, innocent-sounding plants soon emerge in all their carnivorous predatoriness:

where the phrasing suggests both “lovers of wetlands” and something more erotically, atavistically charged. Either way they are deadly and characteristically (for this book) treacherous:

Hunger becomes a key theme and the collection’s final lines, in its title poem, sharpen the focus on Keats’ most famous reference to immortality:

We get the feeling that all these supposed natural pushovers, in reality the fittest and most canny of survivors, truly are not born for death. Hungry generations seeking to tread them down will need a very cunning, presumably ultra-Darwinian plan.

When human subjects make their rare appearances, they often encapsulate similar paradoxes of unlikely power, but for the most part in rather more complex and interiorised form. The opening poem, ‘Boyhood of Senesino’, invokes the unique perspective of a celebrated eighteenth-century castrato who, whatever view his era might have taken of his maleness quotient, and accordingly the degree to which he could be considered a complete human being, possesses an asset denied to the genitally intact. So adept is he in using his voice for purposes of emotional manipulation that he

Elsewhere, humans are seen as perplexed and embarrassed observers, combatants of nature rather than its unreflecting celebrants. In ‘Titan Aran’, the arrival of a “colossus of Sumatran forests”, an enormous carrion flower with “a stench of rotted corpse” which became more like a beast than a plant and proved a “hothouse sellout” at Key Gardens in the late 1850s, creates quite a stir among those seeking to deny their own animality, who in classic Victorian style vainly attempt to hide their inner passions beneath civilised clothes and perfume:

Other poems bring forward typically nuanced studies of resilience, notably in ‘Aunt’, where the lady in question, despite seeming a stereotypically inert curtain-twitcher (‘windows veiled with net’) shakes up a card game with her family in a sudden burst of unexpected energy, and an unanswered shriek of “‘Cheat! Cheat! Cheat!’” This poem is deliberately juxtaposed with its immediate predecessor, ‘Sunday’, which itself has segued delicately from the Victorian backdrop of ‘Titan Aran’, in its sedate and stiffly repressed images of the British day of rest, referencing “great aunts withering / in coastal towns” and summarising the day as

As we will soon see, the aunts are not all withering just yet: in Bone’s world, things are not quite so lifeless as they may seem.

Perhaps in oblique commentary on the age of Darwin, the collection dwells with a mocking but subtly pitying touch on Victorian life, never more so than in ‘Fern Fever’, where the contemporary craze for the quaint art of fern collecting generates longings to break out from humdrum reality:

The poem captures the period’s key tensions by first conveying this eternally human yearning, in its Masefield-like exotic litany of fern varieties –

but straight away suggesting a contrary impulse, in the slight control-freakishness of the pastime itself:

In the back-cover quotes, Sarah Barnsley has rightly flagged up the “exquisite framed diagrams” as an emblem of what Bone has created in this book. Similarly, the “pearl handled lens” could also stand for the poet’s own most valuable gem, his piercing insight into the subject-matter of the collection. He is certainly a writer who stands up to similarly minute scrutiny, and discerning admirers will look forward to studying whatever next comes under his magnifier.