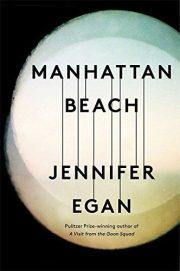 A Review of Manhattan Beach by Jennifer Egan.

What can readers of Manhattan Beach, expect from Jennifer Egan’s latest novel?

More interplay between the text and social media, maybe, like the series of Tweets she posted as Black Box in 2012?

Or, perhaps the kind of dizzying switches in time she conjured up from chapter to chapter in A Visit from the Goon Squad, winner of the 2011 Pulitzer Prize?

So far, critics seem to agree that Egan has eschewed experimentation on this occasion and turned her hand to an old-fashioned crime thriller wrapped in an historical novel.

Manhattan Beach tells the story of, Anna Kerrigan, the first woman to work as a deep sea diver in Brooklyn’s ship yards during World War Two.

A few years before this breakthrough, Anna loses her father Eddie, a bag-carrier for the mob, under mysterious circumstances.  His disappearance leaves her family in grave need, until she volunteers to train as a diver in an industry depleted by the steady loss of its workforce to the war effort.  She faces down the hostility of men left behind by the draft, gains her diving qualifications and goes on to earn a decent living repairing naval ships damaged in battles at sea.

Haunted by the memory of her father, she suspects the complicity of one of the gangsters who employed him, Dexter Styles, in his possible murder.  She tracks Dexter down and they seduce each other.  She uses this act of adultery to force him to help her look for Eddie’s body.  Their quest is unsuccessful, and she finds she is pregnant.  Unwilling to give up her baby, she moves to San Francisco where she finds work as a diver and finds a new identity as a war widow.  By the end of Manhattan Beach she is an independent woman who is able to support her new family, free from the disgrace usually attached to unmarried mothers in the 1940’s

Manhattan Beach is a page-turner, but that does not make it a crime thriller.  It shares little with the conventions of a police procedural.  Nor does it have an untrustworthy first-person narrator directing us away from murderous motivations and methods.  More importantly, Egan’s role as omniscient story-teller allows her to reveal pretty much everything we need to know about Eddie’s vanishing just over half-way through it.

Egan certainly has us rooting for even the most flawed of her characters, but I don’t think she relies on embedding them in a particular time and place for their appeal.  While she has clearly done her research, evident in the name-checks of contemporary men’s wear brands and the magazines to be found in a doctor’s waiting room of the era, I think the setting she’s chosen forms the backdrop to something more ambitious than an historical novel.

Large themes of sin and redemption were already apparent in A Visit from the Goon Squad, and if its rock and roll milieu offered Egan’s characters plenty of chances to stray, the stage Egan dresses for them in Manhattan Beach provides even greater temptations.

The hardboiled union bosses and their criminal paymasters operating on the waterfront of 1930’s New York thoroughly corrupt the two most important men in Anna’s life.  They are troubled, all the same, by moral dilemmas over familial duty and fidelity.  Eddie wrestles with the urge to abandon his family, despite his love for his wife and Anna, as he cannot bear being the father of his elder daughter, Lydia who was born with devastating disabilities.  Dexter tries really hard to remain faithful to his WASP wife and at the same time harbours impossible dreams of making the cross-over to the legitimate business world after the war.

Anna inhabits a more innocent space, where she feels constrained by her “Good Girl” persona so, when the opportunity comes along to blackmail Dexter into joining her in the search for her father, she doesn’t hesitate, and this morally dubious action is an essential part of her development.

The greatest moral and physical trials in Manhattan Beach are endured by a group of merchant sailors Egan portrays crossing the ocean in one of the US Liberty ships, which delivered vital supplies to the allies throughout the war.  When their vessel is torpedoed, they’re left drifting for days at sea with no guarantee of rescue and they react to their ordeal in surprising ways, with bad men doing good things and good ones bad things for good reasons in extremis.

It is the sea which gives this novel a spiritual centre.  Not only does it act as a catalyst for the best and worst in humanity, it also becomes a site of transcendence.  Anna’s drive to achieve her unusual ambition is fuelled initially by a compulsion to show others just how capable she is.  On her first dive she discovers enormous pleasure in mastering the tools of her trade under water, but it is the experience of weightlessness which induces a feeling of such joy that she is reluctant to return to the surface, for her diving dress, which was a heavy, painful impediment on land, has become the means to reach a state of pure happiness in the sea.

In Anna Kerrigan Jennifer Egan has created a worthy heir to Nathaniel Hawthorne’s Hester Prynne more sympathetic to a secular audience.  It’s probably no accident that Egan prefaces Manhattan Beach with a quotation from Moby Dick.  Like Herman Melville she raises the big question of how to be in the world without God.  Her heroine lives with no religion to direct, reward or punish her.  She can’t find a way through without moral compromise, but she does reach a position where she is able forgive her father for his abandonment.  If there’s no higher authority to sort out the sheep from the goats, Egan seems to suggest, then all we have is each other.