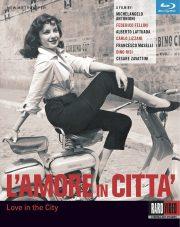 Sands Films Cinema Club of Rotherhithe regularly shows well-known classics and rarely-seen gems as part of a programme* designed to bring the best of world cinema to a London audience.  Each film is introduced by Olivier Stockman, director of Sands Films, who concludes the showing with a Q and A session when the audience is invited to share in Olivier’s deep knowledge of the history of film.

The cinema club recently put on a season of films made in 1953 which included Cesare Zavattini’s Love in the City (L’Amore in Citta)**.  In his introduction Olivier informed us that the producer and director, Zavattini, intended it as the first part in a series of works modelled on the cinegiornale format, which ended up as a one-off.  It consists of six shorts directed by well-known exponents of the neorealist movement, whose growing fame and increased commitment to their individual work prevented further contribution to Zavattini’s project.

Love in the City focuses on contemporary experiences of love in the city of Rome.  Made in the final days of neorealism, the film is typical of the movement: using real people speaking in their own voices rather than professional actors; filming on location rather than in the studio; exposing the unique and fascinating aspects of ordinary lives lived in challenging conditions.

As Olivier explained, the practitioners of this art form aspired to produce films which were the antithesis of “telefoni bianchi”, the white telephone movies made in Italy between the wars, which showed Italians living a life of Hollywood glamour way beyond the reach of most cinema-goers, epitomised by the presence of a white telephone on set.

The first film, Paid Love by Carlo Lazzini, enquires into the daily life and trials of Rome’s prostitutes through an unseen interviewer, who asks the paid lovers on its dark and shadowy streets about how they got there and why they stay.   It records stories of seduction, betrayal and abandonment told by women who seem weary, yet strangely free from the dangers of physical attack, sexual violence and addiction which have always been part and parcel of the lives of those who work in the sex industry.  They complain of little more than the difficulty of keeping warm, how many pairs of shoes they wear out in a year, and the risk of being arrested.  One young woman, filmed in her lodgings, reveals her youth and naivety when she displays a huge, grotesque Marie-Antoinette doll bought with her earnings and describes how she relaxes in her time off with Mickey Mouse comics.  Lazzini probes his subjects in an objective manner but his curiosity is tempered by sympathy for them.

Next, Michelangelo Antonioni documents the circumstances which drive individuals to attempt suicide, giving the audience a more detached, existential view of his chosen issue than Lazzini.   Again, the spotlight is on women whose misfortunes are due to failed love.  Antonioni concludes that his subjects’ plight is really the province of the psychologist, but his film focuses on a kind of anomie experienced by some citizens of Rome in the aftermath of the Second World War which could lead to a desire for self-destruction.  Shots of the participants in Attempted Suicide, staged in front of huge sheets of paper, reinforce their sense of alienation and presage some aspects of Antonioni’s later work.

Gavattini grants the audience some relief from the seriousness of Lazzi and Antonioni’s offerings with the presentation of Dino Risi’s Paradise for three Hours (Paradiso per Tre Ore).  Risi leads them into the dance hall on a Sunday evening where domestic servants take a break from their duties in the company of soldiers and young men crazy about dance.  The tone is comic, maybe a little cynical: dancers wink and exchange flirtatious glances with other dancers over their partners’ shoulders; boys with brilliantined quiffs and flash clothes exhibit their best moves to the girls and each other; a battleaxe Mama vets prospective dancing partners’ suitability for her daughter; a beautiful Amazon arrives and causes havoc; a fight breaks out.  But sweet romance flowers on the side-lines: a soldier and a young woman look at each other shyly but with longing, until the curfew hour arrives and she has to leave whereupon the soldier finally finds his feet and runs out of the hall to catch up with her in the street.  And so the first half of Love in the City ends.

The second half opens with Federico Fellini’s Marriage Bureau (Agenzia Matrimomiale).  At first Fellini seems to be presenting another documentary –style film with the introduction of his protagonist, a young journalist played by professional actor Antonio Cifariello, on an assignment to investigate the bureau.  Unlike the young men of Three Hours in Paradise, he is elegantly dressed and groomed.  He even has a car.  But as soon as enters the crumbling palazzo which houses the bureau, the atmosphere changes and takes on a dream-like quality.  The building is a bewildering maze where dozens of families live hugger mugger with scarcely any privacy.  His requests for directions are futile until he comes across a group of children who lead him through the corridors to his destination, where he finds the bureau’s managers presiding over a madly bureaucratic setup.  Unprepared for his mission, he comes up with a preposterous story about a wealthy, lycanthropic friend who is looking for a wife who would be willing to tolerate his peculiarity.  Amazingly, a potential bride is found and he drives her to the outskirts of Rome where he repeats his ridiculous tale.  But the inexperienced reporter has underestimated the terrible gulf which separates the wealthy bourgeoisie from country folk.  For the lisping girl from a dirt-poor rural background tells him that marriage to a werewolf would be quite desirable in comparison with her current wretched state, and he realises the joke has gone too far.  He tells her that he doesn’t think the marriage would work out and she blames herself for lacking the qualities needed to make a suitable partner for an imaginary shape-shifter.

Caterina’s Story (La Storia di Caterina), is an account of how a young woman abandoned her son in the face of insuperable difficulties with the role of Caterina played by the boy’s mother in real life, Caterina Rigoglioso.  Directed by Zavattini and Francesco Masselli, it is the most conventional of the six films, with its origins clearly to be seen in the Nineteenth Century literary tradition of Verismo.  Its makers spare no efforts in rousing the audience’s pity with this story of a mother who struggles to bring up her son in the face of a church and state which seem cruelly indifferent to their desperation.  When she changes her mind and tries to reclaim him, she goes to court to exonerate herself and get him back, while branded “an unnatural mother” in the press.

As the audience tucks away their hankies, Zavattini ends Love in the City with Men Staring (Gli Italiani si voltano), a look at sex in the city.   A camera follows beautiful women through the streets of Rome to capture the reactions of the men who turn to stare at them.  It lingers on their well-upholstered bosoms and shapely legs as men ogle and some follow the objects of their admiration.  Inevitably, a driver loses control and collides with another car.  Alberto Lattuada’s film might make discomfiting viewing for some members of the modern audience, but it recalls an Italy of bottom-pinching and catcalls, probably not entirely extinct, which seems to me more in keeping with Benny Hill than Harvey Weinstein.

Even though many of the subjects of Love in the City appear as victims, the film is still remarkably innovative for placing women in its foreground.  Even more daringly the directors insist that a woman who has left a child or attempted suicide or works as a prostitute is still worthy of the audience’s understanding and sympathy.  This was a bold stance, and all the more so, when we remember the power and influence wielded by the Roman Catholic Church in Italy, which would have classified such women as mortal sinners destined for damnation.

Did Zavattini succeed in showing Italians to themselves in Love in the City? Yes, I think so.  It is hardly a fly on wall documentary and a lot of it seems contrived.  For example, Dino Risi could never have captured all the incidents in sequence which occur in one dance-hall on one Sunday evening in Three Hours in Paradise.  But if we compare it with a Hollywood version of life in Rome released in 1954, the reasons for my conclusion should become clearer.

Three Coins in a Fountain is the story of three American women looking for love in Rome, where they can afford to live in sumptuous marble halls on secretarial salaries.  Rossano Brazzi, the only Italian actor in the cast, plays the love interest of one of the women, while another, an “Italian prince” is played by Louis Jourdan.  The plot is as insubstantial as air and could have been made into a film in any city with a significant architectural heritage.  Shot in Cinemascope by a crew imported from Hollywood by director Jean Negelescu at a variety of spectacular locations such as the Villa Lante al Gianicolo and the Piazza di Trevi, it is a glorious, technicolour travelogue, described by Bosley Crowther of the New York Times as – “Slick as Cellophane”.

By contrast, Zavattini’s black and white film shows Rome with much of its fabric and economy still wrecked by World War Two.  He shows the audience real Romans making a living any way they can, who go home to mean, cramped accommodation, but still know to cut a dash in the street or on the dance floor.  In Love and the City he captured an era of Italy’s history which would disappear in the wake of its post-war boom, along with the cinematic movement he helped create to make a lasting document of it.

*You can find the full programme by clicking on to this link:

**You can download Love in the City from Movienightseries.com