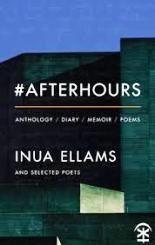 Inua Ellams is a lucky man. For the whole of 2015 he had the run of the National Poetry Library on London’s South Bank in the guise of poet in residence. The previous year he turned 30 so he decided to use his residency at the library to ‘reconstruct my youth by writing response-poems to the work of British and Irish poets’. He would write his own poetic response to one poem for each year between 1984 when he was born and 2002 when he turned 18.

The result, #Afterhours, has three elements in each section: the original poem, Ellams’ ekphrastic response and his diary entry or blog, hence the #, about how the poem was chosen, made him feel, and how the writing went for him.

Inua Ellams was born in Nigeria of a Muslim father and Christian mother. He has been living in the United Kingdom since he was 12 and is a playwright, performer, graphic artist and designer as well as poet. He is currently touring ‘An Evening With An Immigrant’ from London where he lives and where he founded the Midnight Run, a ‘nocturnal urban excursion’. In 2014 he won the Live Canon prize for ‘Shame is the Cape I wear’. https://www.youtube.com/watch?v=VioAPex9HXo

Chris McCabe is the Poetry Librarian and his ‘#Afterwords’ (rather than foreword) is a treat in itself. I will leave you to discover for yourself the story of how he and Ellams met and how he was struck by ‘a poet extremely at ease with the idea of engaging in dialogue with other poets, who sensed intuitively that poetry is born from the sparks that fly from the hinges between poems, that believed in the community that bonds poets from around the world together’. McCabe is passionate about the relationship between reading and writing poetry, how ‘As the child is father to the man, the reader is always parent to the poet’.

Ellams’ plan was to work closely with McCabe and his staff to find a suitable poem for each year. Ellams would stay as close to the basics of the original poem as possible in structure, subject matter, length and so on, so that his poem would recognisably answer the original while being indisputably about Ellams’ childhood. He takes staying close into precise acrosticism – sometimes he insists on keeping the first and last letters or words of the original poems for his own – rather too often for my taste and eventually he abandons that approach as too constricting. The acrostic pyrotechnics are astonishingly impressive while they last.

Some of the best fun is in the diary entries with occasional lines like ‘Basil Bunting is incredible’ or ‘Paul Durcan is outrageous’. Poems, like Tony Harrison’s V, are admired but rejected as too long for the project’s confines. Others are turned away because of theme or style – too conversational for example. In Heaney’s collection The Haw Lantern, Ellams finds ‘From the Land of the Unspoken’ so perfect ‘I can’t think of what I’d need to change to make it more “Nigerian”’. He lived three years in Ireland and detects many similarities in Irish and Nigerian temperaments.

In 1988, when Ellams was four years old, Jo Shapcott’s ‘Photograph: Sheepshearing’ was published. Shapcott is reflecting on a 1917 photograph of shearers – ‘Here are six men, their tools, a cart’ – and their ‘single-minded look / held for the full seconds needed to etch the image / on the photographic plate’. It is a vivid poem, much loved for the build of detail to the finish:

Ellams uses this poem to subvert the whole ekphrastic exercise. Shapcott is responding to a representation of an experience had by other people. Ellams is brought by her poem into remembering an experience of his own:

This is not shearing:

Diary Entry #9 to accompany this section is a doodle with a proud ram’s head in the middle.

Another doodle is Diary Entry #14, for 1993. It is Monica Alvi’s turn for the treatment:

#Afterhours is a thoroughly enjoyable anthology of significant poems by Irish and British poets between 1984 and 2002, a collection of zestful, well-crafted responses by Ellams himself and a wonderful account of where his poems came from, including some lovely, gossipy pieces like Diary Entry #15 where he has a good old rant about who made it onto 1994’s New Generation Poets list.

He is always engaging. Never more than in Diary Entry #21 when, having been asked why he writes, he recalls how it first felt to sit in Holland Park School as a child among youngsters from dozens of other countries. Noticing how similar everyone was, from mannerisms to ‘beneath skin, small ripples and twitches that reminded me of friends in Nigeria’, he says: