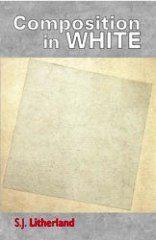 S.J. Litherland’s Composition in White is a collection of poems that illustrates the intricacies of life as lived through cricket, family, childhood, revolution, the two world wars, Morris dancing and landscape. It is a vital book in the sense that the poet achieves a comforting yet challenging vision of what it is to be human: to love, to celebrate, to weep, to exclaim, to admire and to admonish. It is a fine collection which I thoroughly enjoyed. The book is divided into 6 sections and I would love to go into great detail about the poems in each one of them; but then I would have to write a book myself! So I will pick a poem from each section to illustrate the range and diversity of Litherland’s subject matter, literary skill and the fresh, yet complex, nature of the poems.

The first section is called “Springtime of the Nations” which is also the title of the opening poem. However it is “At the Windward Club” that I have chosen from this section. This poem deals with the main theme in the book, namely the author’s love of cricket and all things connected to Ian Bell (she admits in a later poem that he is her muse and she dedicates the collection to him). The scene is set by the first stanza:

It becomes apparent that the poem is set in Barbados where “everyone knows/the minutiae of the game , / its cathedral interior;” The batsman they are watching is Bell and “by the boundary”, “Boys are collecting empties”. Furthermore, the partisan crowd reminisces about their colonial heritage as the author states: “They’re affronted by Stanford / who came to their islands / to steal their money / and their cricket.” But for the author (who has obviously placed herself in the scene):

Then present reality returns as “Bell takes three boundaries / like chopping down trees.” The poem is linguistically effective and the poet’s relaxed freedom with form and content makes it an effective and attractive piece of writing.

The second section is called is called “A Word for Warwickshire” and the pieces deal with outdoor swimming with a friend, a relative who was a coal merchant, the bombing of Coventry by the Nazis, and a poem about the author’s daughter. The poem I have selected is called “Stars and Stripes” and is about the poet’s contact with American soldiers during the Second World War. The author vividly describes “The Yanks”  who “wore those beige cotton uniforms” with “Ironed trousers, neat hats aslant, they were turned out / compared to our heavy worsted lads, they were clean cut”. Then she and the other children were “brave kids, desperate /for a treat,” and so they “asked for gum.” and “the Yanks” never said no. Once with the gum, the kids “curled the free strip upon our tongues.” and the poet ponders on how they might have appeared to the US soldiers in “our wartime togs, a gaggle/of Brits, brazen and curious. Our garments not washed / or ironed until Sunday.” The poem concludes “We were a ring of compatriots, somehow we knew / our rights, children were exempt from decorum.” Such is the admirable descriptive power in this piece that it has a cinematic quality.

Section 3, “Forever Young” mainly revolves around the theme of cricket and includes two poems dedicated to the cricketer Ian Bell. The poem “The XII Days of Christmas” uses alliteration to a sumptuous effect. Basically it takes the terminology of cricket and turns it into a poem, for example:

So the poem here is both amusing, direct and stimulating and could almost encapsulate the game of cricket itself.

Section 4 is called “Winter Trees” and contains poems about geraniums, the First World War, Morris dancing and a piece for the poet Bill Martin. I have chosen “Durham in February” for its evocative style and description. The vista is set in poetic motion by the first stanza:

A later simile about the trees which “drew up from the opposite / curve of woodland like taut sentries / in brown and white uniform;” is particularly stark and impressive. During the walk along the river the poet sees “a skiff, a snow white skiff”, its “white oars in the calm chocolate water, / the oars flashed like underwings of birds;” and she concludes “the oarsman sped lightly, a phantom briefly, / a skiff, a snow white skiff, like a sleigh.” I have highlighted this poem for its vibrant images and a skilful use of language which is evident throughout the collection.

Section 5, “Red Thread”, deals with subjects from time spent in a German Hotel, a reunion of friends in Box Hill and “An imaginary film set to music by Andrew Cronshaw” called “The Unbroken Surface of Snow”.  Among this rich variety, the poem that most caught my attention was “Lines on ‘Already Broken’” because it is about the only example where overtones of despair in a modern setting are to be found – although throughout the collection the poet shows a keen fondness for the past. The poem begins by describing a woman who was “already broken” by a “Buddhist text” and living in “rooms in Clapham North / revamped exquisitely like the perfect / cup and saucer in a tea-set” – an arresting and effective image. However, in contrast “the street was dingy and on its doorstep drugs / might overflow at night.” The woman in question was “something of an educated class,” and “the Left-wing kind”. The author goes on to repeat that the lady was “already broken” in a way that had something to do with “a dangerous flirtation with a theatrical past.” Even now “Her life had not conquered sorrow. Not regret / just a crack of bitterness in her façade” Thus in a candid fashion the poem outlines the life of a woman in the context of her residence and her fragile sensibilities – the first time the author mentions anything verging on the edgier and darker side of existence.

Section 6 is called “Edgeland” which, notes inform us, is where “the nymphs wept so bitterly for Marsyas their tears formed a river” according to Ovid. The poem “Edgeland” deals with this occurrence while “Black Kesh” tells of an incident with The Garda. while “Woewater” is about the Holocaust. “Whitby” again demonstrates the author’s talent for poetic description and language as “We compare the sand to khaki, the sea a middish brown, / a camouflage of khaki and white, the air drowsy with drizzle, “ – a fantastic image. The only entertainment available here is “the snow of the waves /and bridal veils dragged over the shoreline from wives / disappearing under the breakers.” Also “the sea is seething an argument with itself” and it has “a muddy riot of dull colours, lathered in cream.” The concluding metaphor is exquisite: “The view deep in blousy waves, endlessly unbuttoning.”

Thus, I have no hesitation in stating that S.J. Litherland is one of the finest poets I have come across in recent years. I admired and loved this collection for its skilful detail and the sense of time and place which is endearing, evocative and enriching. Litherland engages the reader’s senses on every level through her vivid description and her passion for her material. At times the language is expansive and at other times it is economical, but each word feels carefully chosen to fit like a piece in a jigsaw puzzle. This book could serve as a masterclass in poetry.