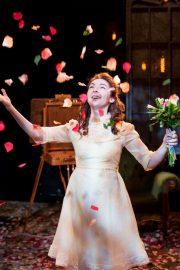 As an uneasy blend of references from A Midsummer Night’s Dream and the madness of its wood and the “Dear Brutus” lesson of Julius Caesar that we, not the stars, are to blame, it’s not surprising this unsettling 1917 work, infected by war-time bitterness, is far less performed than J.M. Barrie’s effortless Peter Pan.

But for aficionados, a deft revival in the play’s centenary year is a welcome chance to shed fresh light on Barrie’s fixation with the mismatch between the human potential and idealism represented by a child and the failed adult mess all around us.

Instead of the eternally young Peter Pan, we have a central character Lob, as in “lob of spirits”, Shakespeare’s alternative name for Puck, who, like Puck, is ancient and boyish and amoral.  He is played inscrutably by Robin Hooper, with the mischievous indifference to convention and to hurting feelings only the very old and very young can master.

The rest of the cast, directed by Jonathan O’Boyle, is anything but timeless.  Rather it’s deliberately mannered and class-bound in the Edwardian tradition with an unsubtle distinction between the cut-class above-stairs crowd and the accent of the petty criminal butler Matey (Simon Rhodes).

Designer Anna Reid’s set of Middle Eastern carpets and art nouveau lamps completes the sense of period, whilst its cosiness through contrast makes the weird wood all the more disturbing.

If the confusion of Shakespeare’s magical forest gives way to harmony and a fine comic ending, Barrie draws his laughs before we leave the drawing room.

In the edgy atmosphere into which his characters eventually emerge, human nature is cause for disappointment not amusement.

A deflated John Purdie, played by Edward Sayer, is forced to acknowledge his own littleness as a philanderer equally ridiculous in the eyes of his wife Mabel (Bathsheba Piepe) and his lover Joanna Trout (Charlotte Brimble).

The frightfully stiff Lady Caroline Laney (Helen Bradbury) is horrified she might have cavorted with Matey, while even the dear old devoted couple Mr and Mrs Coade (James Wolley and Josie Kidd) set about questioning the depth of their attachment.

But the shock is the harshest for Alice Dearth, played by Emma Davies, and her debauched painter husband Will Dearth (Miles Richardson) as they’re thrown back into their joyless marriage.

Their great “what might have been” is a child, played by Venice van Someren, convincing as a precocious, prescient Margaret, who fleetingly transforms Will Dearth into a doting father.

His tragedy is that she is the one character who never returns from the wood except for a final encounter with the ancient Lob that is more of a primeval scream than any kind of reassuring resolution.