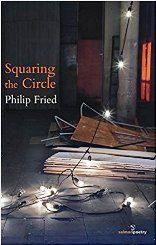 Philip Fried’s seventh poetry collection is in four sections: Powers of 10, containing twenty-one poems not only about mathematics but even more about an endearingly unpindownable character called God; The Quantum Mechanics of Everyday Life, nine examples of the physics of the universe as it happens to us, or we make it happen (housework, child’s play, ageing and dying); Cutting Edge, fifteen poems engineering this universe into various mad inventions, agriculture in the air or more realistically a lot of bombs and destruction; and The World’s Big Show, fourteen poems treating further big themes in mostly comic ways, but as with all these poems, much seriousness behind the jokes. Fried is not afraid of tackling the universe in ways that can call for some googling to be quite sure of the details, though the overall idea is usually clear enough to carry the intellectual load. Fried’s personality comes across as a puzzler, but with very human concerns which he wants to express through this well-educated play.

Fried’s wit is all-pervading and inhabits individual images and whole-poem conceits, as well as the language he uses. ‘Pilot Episode, October, 1962’ features nuclear family The Fissiles, their sitcom maybe not getting past its pilot episode, as ‘A half-hour in the half-life of a family’ gets stuck in something of a loop while they are stuck in an underground shelter, and the poem turns out to be that looping form, a pantoum. The God poems follow various famous episodes in his career (the Creation, Babel) but mostly he is there as the prime mover of mathematics. The first poem, ‘Powers of 10’ combines childhood recollection of family and the teaching of number and religion – ‘Numbers are given to us in the air we breathe – / Parents are two, sister one more than one’ while ‘Early on, I’m taught to believe in a God who is One, / Whose Number is given to us before the air’.

The grounding in the personal, especially family experience, gives this poem and a few others a substance which others may lack, however witty. The family details are not in themselves remarkable but the extra dimension feels more significant. ‘We are such stuff…’ alternates versions of the god Hermes as various present-day tradesmen with a very genuine mother, sipping soup while herself becoming ‘A few soup bones and a consommé of flesh’. ‘Hallucination’ starts with ‘Grandma was hoovering, mopping, brooming her three- / Room cosmos’ and immediately this is a real grandma, and a match for any bizarre hallucination of a man in a pith helmet ‘Unicycling on a ray of light’ and juggling binary digits, representing quantum physics. She is a tangible Victorian defender of ‘Newtonian absolutes’, which is why it’s both entertaining and moving. Elsewhere the trope of the domestic meets the cosmic can feel overdone, which it shouldn’t – making that big connection is what poems are expected to aim for – and it’s usually that kind of poem that wins big competitions. At its best there’s that spooky feeling I can still get from the young Simon Armitage’s ‘Zoom’ (the billiard ball heavier than Saturn, conjured up by the power of words) but a whole book where it’s what happens in most poems brings a danger of routine.

Fried endlessly invents new views on the world we live in, often by turning it into one we mercifully don’t. In ‘I dreamt that I dwelt…’, the future is a time when ‘the tumorous growth of scruple or qualm’ can be discerned in the face: Fried’s dystopias are often most effective when least dramatic. Inventiveness keeps the entertainment level high, while the erudition level is also pretty high. This adds to the general feeling of dense complexity, supporting the entertainment when it can, but sometimes taking over rather in the way of God’s inventions – ‘God became addicted to convoluted / contraptions for accomplishing simple tasks’ (‘Gadget’). God then creates Galileo to demonstrate gravity with a pendulum ‘from the leaning tower towards Mrs. Laufer’s // Class’ so the kids have to duck and cover, and the poem ends with an explosion both satisfying and ominous. Some of the poems’ inventions do feel like barriers to their own achievement, if at any point the mechanism is not enough fun to watch whirring along, or take apart to get to the bottom of it.

I did find myself wanting more space between moments of wit, inventiveness and erudition, which might sometimes be achieved with shorter poems, or lighter textures. There is lightness in ‘Thirteen Ways of Looking at a Paperclip’, but while the thirteen-ways poem has become something of a set form, I could do without ever seeing another example. A more effective nod to a predecessor poet is the poem ‘no ideas but in things’, a pessimistic reversal of the Williams red wheelbarrow but in itself an epiphany, even though these chickens are being repossessed. Political insight can be a saving grace: in ‘Squaring the Circle’, after pi has been proved to be irrational in 1882, ‘progress was a juggernaut / And the public had no patience for “proof”’ – which feels prescient about the reactions against truth and experts in 2016, presuming it was written earlier (or otherwise the publication of the book has been remarkably swift). In the neighbouring poem, ‘Late in the Game’ Gödel tells God he has found ‘a logical flaw / In the Constitution’ that ‘could make a dictatorship legal’. God offers him a Halo Dog and wants to get back to the baseball game now the Seraphim have finished singing ‘God Bless America’. It’s the presence of this very human God that is behind all Fried’s wit and wisdom, even if the wit and wisdom sometimes gets in the way.