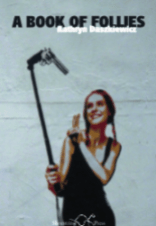 A Book of Follies is Kathryn Daszkiewicz’s third collection from Shoestring Press; earlier collections came out in 2006 and 2012, intervals that suggest she allows herself sufficient time to recognise how her themes are developing and for connections between the poems to emerge. The varied meanings of ‘folly’ hold this collection together but not in any forced way; she also has the confidence to stand back from the personal and write about the natural world with a concentration and attention that allows the folly-linked poems to inhabit a wider context. It works.

The collection opens with a misjudgement that most of us will recognise within our own lives: a dysfunctional relationship that isn’t, yet, consigned to the past. The emotional register of ‘The Loaded Gun’ links to the striking cover image of one piece of graffiti on the Reeperbahn –

Both ekphrastic and confessional, this sonnet sets the bar high; Daszkiewicz holds both elements in balance, showing the foolishness in both but holding back from presenting her own judgement about this shared trip to Hamburg. The verdict is left to a trusted friend whose words deliver the punchline ‘going there with you is equal to self-harm.’ Vulnerability plus a half-acknowledged tendency to making wrong decisions is outlined here, and while not every poem will expand on this trait, the reader has been prepared for what is to come.

Daszkiewicz’s poetry seems to benefit from formal constraint and she can handle the sonnet form with fluidity and an ear for the varied rhythms of everyday speech. ‘Soar’ takes learning to fly a kite as a metaphor for coping with the trickier aspects of a relationship. Perhaps there’s a note of warning in the second line – ‘You’re going to teach me …’ This may be only the third poem in the collection but accumulating around the poems is a sense of competitiveness and power-struggles in the personal mix.

It’s a poem where subject and technique come together. The caesurae capture the failures as the kite flops, then lifts, then flops; the relationship, we can assume, proceeds in much the same way.

The viewpoint within the poems shifts between first and third person, not always entirely successfully; it may be that the first-person poems feel more fully-formed. More effective is the anonymity of the partner, or partners, as though they are sequential follies. There’s an unanswered question in all this: if a relationship ends, was it foolish per se? Or is there an element of folly in all relationships? The poems stand back from being autobiographical and this provides an entry into a more universal examination of how two people can relate to each other, and then sustain the relationship, or attempt to.

Daszkiewicz’s native Lincolnshire and its landscapes – some named specifically – is the constant backdrop to the foreground action. Looking outwards from the intense and inward focus of each relationship offers an opportunity for a freer, extended line that suits the working of memory, as in ‘She Longs for Sea Fret’

‘Fret’ carries a double meaning, of course, but in that enclosed space described in this opening stanza there is a sense of something valued, and lost: an otherness that is now out of reach. Yet it doesn’t exclude the reader: we recognise the emotion in this longing for the past. ‘This Distance’ is a sequence of nine poems in which place, childhood and the ghost of a relationship track the dunes and lonely Lincolnshire beaches. There is a specific location in ‘By the Wayside’, yet that, too, taps into a memories of a common past –

As Daszkiewicz lets her childhood memory shape the poem, in what at first appears to be a loose free-form way, the title starts to bring in other associations. In the ‘wild’ of the rougher land beyond the allotments and in the way she skipped Sunday school there is an echo of the parable of the sower, in which some seed falls by the wayside; this is touched in lightly – but it’s enough. The hawthorn, which seemed just part of the landscape at the start, returns with a more significant presence: ‘They said it was bad luck to pick the May’, then how the scent ‘stirred’ her, and finally with allusions to hawthorn’s sexual associations. The word ‘wild’ occurs more frequently towards the end of the collection, and it’s clear that Daskiewicz applies the word to herself in alliance with the maverick aspects of the natural world, out there beyond suburban cosiness.

She ends with the poem that gives the collection its title: ‘The Book of Follies’ –

In this imaginative leap she justifies all the wrong roads, the mistaken relationships, the errors of the past which she has made – and which, if we are honest, we have made too. So her depiction of a folly as ‘A gateway to perhaps’ is not only an architectural fantasy that teases the eye but is also, metaphorically, the hopeful dream that draws individuals repeatedly into relationships.

As a collection A Book of Follies has a carefully-worked structure in which one poem is linked to the next, perhaps by an echoed word or phrase, perhaps by the turning of an idea so that it can be viewed from another angle, and all this within the over-arching theme of dreams, folly and the ‘cuckoo land’ we inhabit. I have enjoyed the time spent in the company of this book; it revealed its themes slowly, with attention to the over-lay of visual and emotional detail, and the best way to shape each poem.