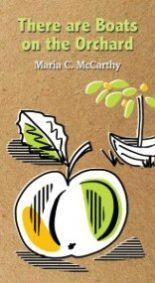 I very much appreciate the quiet irony and commitment of Maria C McCarthy’s poems. Between reading and rereading this illustrated pamphlet, the title kept returning to snag at my attention. Boats, not ‘in’ but ‘on’ the orchard. It’s just the way someone might say it, of course, but that unexpected preposition is also metaphorical; the reader might think of this orchard as sea or harbour, a place where you could float a boat, or conversely as mudflats or a boat graveyard, the boats high and dry, not quite in their element, perhaps, stopped in their tracks, not in but on.

On its most simple level, the book is a faithful description of the vanishing Kent orchards, a world in danger of becoming obsolete, told through poems that chronicle seven years spent in close contact with one particular cherry orchard. From the lush found language of cherry varieties (‘Merton Bigarreau, Bradbourne Black’) to the closely observed movements of pheasants, McCarthy’s words and Sara Fletcher’s line drawings work together beautifully to convey a powerful sense of place, evoking a time of change, decay and possible renewal. The book contributes specifically to the Kent Orchards for Everyone project, making a poignant, poetic case for the preservation of such orchards.

However this is not simply elegy; from the start, McCarthy mixes in humour and subtle indications of social and political issues. In the ‘Prologue’ she moves from a ‘handkerchief’ of a garden to a writer’s shed looking out on a ‘picnic cloth of land’, suggesting a joyful widening of perspective. She comments wryly that ‘this woman’s place is in her shed.’

The poet notices both injustices and small acts of defiance in the rural context. In ‘The Faithful’:

A ‘Selfish Giant’ of a landowner chases away scrumpers, but as soon as he’s out of the country, local children move in to play on the ‘battered hymen’ of a trampoline left in his orchard after a family gathering. Those in authority are often wrong-footed; in a later poem, ‘Drought’:

There is, it’s true, a pervasive sense of destruction and loss. Trees are felled by ‘a chainsaw bite at the back of the knees’. In an original twist on the ekphrastic poem inspired by a photo (‘Boy on a Ladder’), the fate of the subject is foreshadowed by a crease in the photo ‘like a scythe at your shins’; we learn later that he was killed in World War Two. An uprooted tree, its fruits crushed, provokes a shape poem. And towards the end of the collection, in ‘Eden Village’, diggers arrive to clear the orchards as a new estate encroaches, offering empty promises, inadequate references to the past:

In many of the poems, McCarthy turns her attention to the slow processes of abandonment and decay, and here, for me, there is a move into particularly interesting territory. She doesn’t romanticise, but invites us to enjoy a borderland between ‘natural’ and human objects, where littered beer cans are as much a part of the landscape as blackberries and ‘bletted plums’ (wonderful word for the softening of fruit that I now know thanks to the poem ‘Strange fruits’). Several poems focus on the orchard’s array of dumped vehicles and domestic machinery, gradually overtaken by natural processes as if caught in a time-lapse sequence. There’s a ‘bramble-clamped car’ (how could you better that description?), the lingering presence of ‘spectres of ponies’ around a semi-dismantled horsebox. I especially liked the small but very telling poem ‘Dry Dock’, in which Mccarthy tunnels with great precision into usually unobserved moments; three catamarans become:

and in the rain:

By the end of the book, I found the overall effect more hopeful than might be imagined. There are images of resistance throughout. Birds and other creatures keep defying the restrictions set up in this landscape; in ‘Border control’, cats follow and slip across a newly-established border between properties. In a later poem, a woodpecker challenges the same fence:

The poet herself wants to:

And reading some of the most contemplative poems, I thought again about the boats ‘on’ the orchard, the orchard as a kind of sea where everything can change and change again. McCarthy’s finely-written poems put me in mind of beachcombing, the delight of discovering lost things, and the unpredictable possibilities inherent in mutability.