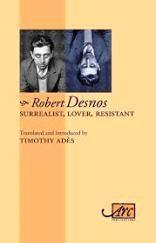 André Breton once declared that surrealism was the order of the day and that Robert Desnos was its prophet. Whilst surrealism in its heyday threw up a number of remarkable poets in France, on this side of the Channel, David Gascoyne apart, most of those British poets who used surrealist techniques in the 1930s and 1940s are long forgotten. Indeed, there were those who found that its forced incongruities – Pound spoke of “any decayed cabbage cast on any pale sofa” – tended to be too mechanical and arbitrary. But on the Continent (and not only in France) it was otherwise, and Desnos was one of many who found a release of the imagination in following the surrealist creed.

Breton, of course, was all too much the Pope of the movement: never an easy man to agree with, most of his acolytes found themselves excommunicated at one time or another. Desnos’ break came in 1929 when he declared that “the gates have been bolted on Wonderland”, though they never quite were, even in the poems written in occupied France, when an imagery of torture-cells, fetters, passwords and watchmen entered his work. Desnos was a brave and active member of the Resistance. Arrested in 1944, he spent the rest of his life in various concentration camps, and died in Terezin, aged only 44, of typhus some weeks after the War had ended. He had packed a lot into his relatively brief life, his radio-work, his novels, his writings for children, as well as the poetry for which is chiefly remembered.

This new bilingual edition of his poetry provides for the first time for English-speakers a comprehensive collection, from the adolescent imitations of Rimbaud’s ‘Le bateau ivre’, the first productions of the tyro surrealist, through the effervescent poems of love, absurdist narratives of the middle years, to the sonnets and classical allegories of the war years, and on to the sadly few (for most were lost) poems written in the camps. It is essential, in Desnos’ case, to have his original French to refer to, for his virtuosic way with his native language, his exuberant word-play find no near-equivalents in English. Much of his work, whether composed in the strict quatrains that characterize French poetry from Baudelaire on, or in the form of songs – some taking on the rhythms of nursery-rhymes – poses problems, some insuperable, for translators. Adès works hard to find effects in English analogous to those of the original, and often valiantly succeeds, though the result may be at some remove from a literal version. He is not helped, of course, by the fact that rhyme-words are notably fewer in English than French, and that Desnos ransacks French lexis for ingenious rhymes.  Adès’ task, as he admits, is easier with Desnos’ free-verse writings where literal translation is more the order of the day, as with the exultant dithyrambs of his love-poetry. However, such are the waves of voluptuous fervor that the reader’s eyes can momentarily glaze over – the translator’s also, it seems, for in one line of ‘The Night of Loveless Loves’ Adès reads ‘oronge’ as ‘orange’ (‘la fausse oronge’ is French for fly-agaric, or the magic mushroom) and thus makes utterly baffling what is in fact one of Desnos’ less cryptic lines. This poem is interesting in reminding us that surrealism is a successor to Romanticism in that the charnel-house imagery of phantoms, corpses, and cerements is all traditional Gothic: the sheer energy and erotic charge, however, are all Desnos’s own. Adès’ brief biographical notes are essential in these poems: it helps to know that in French ‘Yvonne’ rhymes with ‘anemone’ (Yvonne George, a night-club singer, was his first love) and that Youfi who eventually became his wife had a mermaid tattoo (hence the frequency with which the word ‘sirène’ occurs).

In ‘Rrose Sélavy’ he took over Marcel Duchamp’s feminine alter ego in an experiment in automatic writing. For Adès this is one of surrealism’s essential texts. Perhaps so, but I found it too much of a jeu d’esprit that has faded somewhat over the years: there are things to admire, but for me Desnos’ ebullience, sheer impudence and richness of verbal play is put to more telling effect elsewhere in this volume. There is something both child-like and life-enhancing in his work: at its best it has a unique charm it is hard to resist. Certainly, throughout his career, he has the gift of coming up with phrases that haunt the ear. He celebrates in his lover “that little fold between ear and nape, where the neck is born”. The beauty of an ageing woman survives like “a poker in a burnt-out house, unscathed.” Somewhere, he tells us, “morning shatters like a pile of dishes.” He can invoke “the superb grottoes of the Ludicrous Islands” where “very silly birds . . . chat to crocodiles.” He frequently employs double (sometimes multiple) uses of words: in French ‘souci’ means both ‘worry’ and ‘marigold’ and in an inspired neologism Adès Englishes it as ‘worrigold’.

In the dark days of the occupation when the sky “is hollow as an empty oyster” he writes strict sonnets with such fluency it is as if his thoughts came ready-made to him in that form. By now he is looking for a poetry which moves with a sense of inevitability – which, one would think, is about as far from surrealism as you can get. He also uses classical myth in this period in poem-sequences that managed to pass the German censorship: the eroticism was evident, the political message was visible only to the attentive reader. Desnos is a poet of exceptional gifts: the sheer range of his work is the mark of a poet of major ambition. He is, of course, best read in French, but that Adès is able to convey so much of his spirit in English is a remarkable achievement. We hear Desnos’ authentic passionate voice in words like these: “And me alone alone alone like withered ivy in a suburban garden alone as glass / And you never another you but you.”