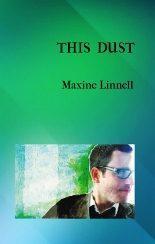 This Dust by Maxine Linnell is a lively fusion of words, images, grief and memories making up a substantial collection. The first part of the book touches on childhood, romance, family and the past. A second section deals with the death of the author’s son at the age of thirty seven, due to an epileptic fit. The third part of the book describes aspects of the author’s present life: who she meets, where she lives and so on.

The opening poem “Night sky” captures a stimulating moment when the poet and a friend looked up into “That Hartland summer night” and “picked [stars] off the sky”. This moment is enhanced by her innocent yet compelling description of the stars: “They smelled so milky-sweet / that we popped them in our mouths / and they fizzed and fizzed / and made our eyes glow.” She goes so far as to mnconclude that the stars “made us write poems”.

“Lido” imagines the author lying “on the lido beach / like a stranded fish,” while she and her friends “sunsoak / through chlorine haze, / giggle and tell stories, / daring boys to notice.” And a boy does notice: “Drowsy with heat, I barely / stir when a young male voice / says my back is red with a sticky offer / to spread suncream.” which results in “cool hands /stroking my skin,/ for a moment / I don’t care who he is.” I liked this piece as it stirs up memories for me as a teenager on the beach in Spain and the poet writes with such simple clarity as to bring the moment alive.

“If you lay next to me now” is a recollection of a past love. The author repeats the title at the beginning of each stanza to significant effect. For example:

The poem goes on in this poignantly reflective way that any reader who has had a serious romantic relationship will relate to.

“White freesias” deals with the death of the poet’s father who, we are told, “was a quiet man, worked in the bank, / came home by bus for lunch, liked peace and rest, / loved Shakespeare, words, his paper, little more.” However, we also learn: “He drowned inside himself. His lungs filled up.” but “It took them years, far longer than he wished / and doctors promised.” Ironically the author concludes:

Here the reader is given a valuable insight into the father of the poet, a snapshot of his life and the way he died. Like a photo, the poem succinctly encapsulates much about the man in a single vision.

The first section and its content displays the subtle way in which the poet approaches her craft. In the second section however the poems are highly personal and more emotionally charged because they relate to the tragic death of the author’s son at thirty-seven. “And now he is” is about her son’s birth when “He seems too tender to touch, / even to whisper a welcome.” and “The midwife picks him up like porcelain. / Her hand fits round his hurting head. / He’s beautiful, she says, / and now he is.” Here the author’s grief is tangible and raw especially in that final line.

“The trowel he made in metalwork” speaks for itself in terms of content; and the poet likens the trowel to “a manacle. Or maybe a charm. “Chocolate” is about a touching encounter between mother and son at St. Pancras and the author describes intimately her proud thoughts of her son:

“He fell out of time” is a short but forceful poem which portrays her son having an epileptic seizure. The quenching pain of losing her son is candidly and powerfully expressed in “Waking”, where the poet struggles down “the length of day corridor” and tries to do so “without more bruises, / without knocking at scabs ,/ bleeding in too many places, / which is hard when / the floor lurches underfoot, / bucks at every step.” This metaphor for her grief is highly effective.

We again witness the author’s vulnerability concerning her son’s death in “Soundings”, “Question” and the heart-breaking “Without-you”; while the final poem in this section (“Five years on”) makes a declaration of closure in its last stanza:

One of these children is the subject of the first poem in the final section, “For Elliot”. We are told he was born on the 18th November 2011, and I am guessing that he spends the day with his grandmother, the author. “We tramp under the bridge, / trying our voices for the boom,” and “You pick a leaf / off your shining yellow wellies,” and “We climb the rise like Everest ./ Your hand’s in mine. You hold my cracked life / light in your small palm. I hug you / right through your wet coat” – these are moving and imaginative glimpses of Grandma and Grandson playing out a scene that we can all visualise.

There are also poems about bees, the poet’s vegetable garden and the trials of moving house. The final poem of this last section is called “Stuff” and expresses the author’s feelings about where life has brought her and what lies ahead. Evidently her new home is opposite a house belonging to a woman, who has left to go into care. Linnell views the subsequent clearing of the house opposite